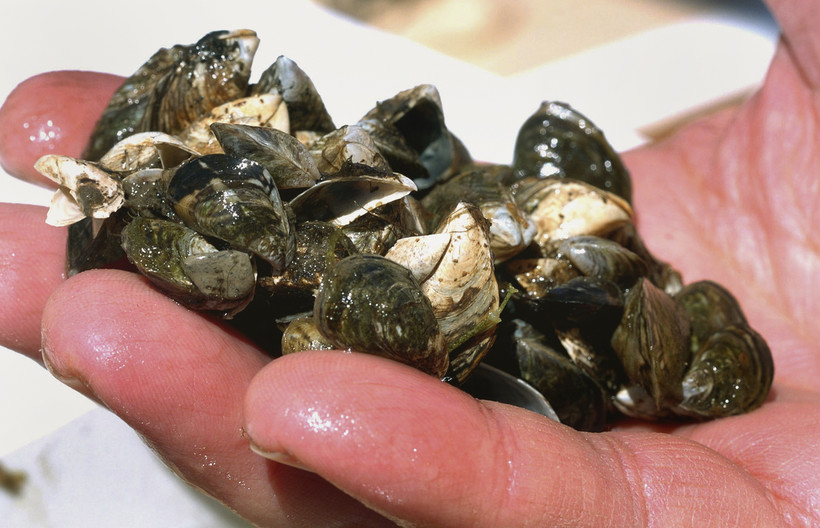 A cluster of zebra mussels taken from Lake Michigan off Suttons Bay, Mich.

Zebra And Quagga Mussels Discovered In The Area In Recent Years
By Danielle Kaeding
Share:

Invasive zebra and quagga mussels were discovered for the first time in recent years around the Apostle Islands National Lakeshore on Lake Superior. National Park Service officials are working with researchers to find out how the aquatic hitch hikers got there.

Zebra mussels were first found in the Duluth-Superior harbor in 1989 while quagga mussels arrived in the ballast water of ships in 2005. The aquatic invaders tend to crowd out native freshwater mussels.

Julie Van Stappen with the Apostle Islands National Lakeshore said divers discovered zebra mussels in 2015 and 2016 on the Sevona shipwreck near Sand Island.

"That was an alarm," Van Stappen said. "Shortly thereafter, we found out that Wisconsin DNR had found some between Michigan and Stockton on the other side of the archipelago. What we’re trying to do is figure out where they’re coming from, are they going to spread and all of that."

Quagga mussels had been found on commercial fishing gear used near Madeline and Michigan islands since 2011, according to the National Park Service.

Mike McCartney, a research assistant professor with the Minnesota Aquatic Invasive Species Research Center at the University of Minnesota, said they plan to collect samples this summer to study the genetic and genomic makeup of both species to pinpoint where they came from and how they got there.

"We use markers that are scattered across the chromosomes of both species and those markers allow us to ask some questions about the likely population of origin for the mussels that are found in the waters near Bayfield," McCartney said.

McCartney said one possibility is that they came from spawning mussels in Duluth and were carried by lake currents to the islands. He said researchers should be able to determine the origin of the mussels within the next year.

Editor's Note:  An earlier version of this story erroneously reported that invasive mussels had been found for the first time last year in the Apostle Islands National Lakeshore. This story has been updated to reflect the actual timeline of discovery.