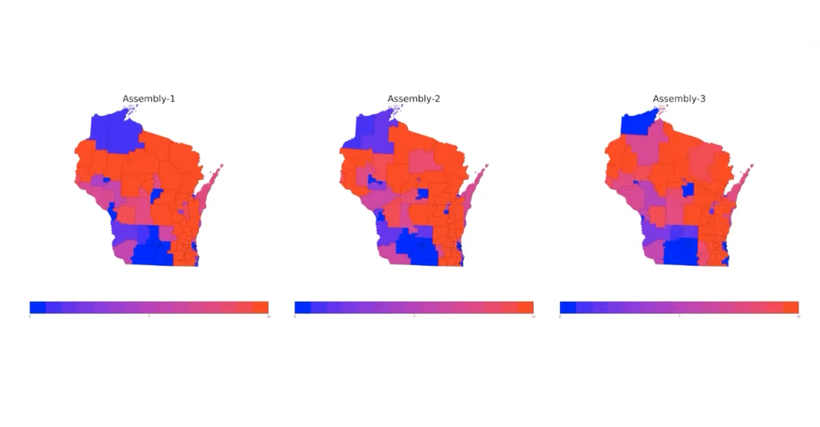 In drawing the maps, the commission considered required criteria such as compactness and contiguity, and also emphasized "partisan fairness." According to commission chair Christopher Ford, suggestions were given by more than 1,800 Wisconsinites in 68 counties.

Moon Duchin, a redistricting expert and math professor at Tufts University, created the software used by the commission, and analyzed the proposed maps based on data from 14 of the state's past elections.

She said if the commission's maps were enacted, the Republican advantage in the Legislature would be less than under the current maps, which were drawn a decade ago by Republicans and declared an unconstitutional partisan gerrymander by a federal court in 2016.

"To my eye, what you've done is you've been able to find maps that don't always lock in advantage for one party or the other," Duchin said.

"If you draw districts against the real political geography of most any American state, districts tend to confer a geographic advantage to Republicans, who at this time in U.S. history are more spread out across rural areas while Democrats are a bit more concentrated," she said.

The commission will take public comment on the proposed maps for one week, with a deadline of Oct. 7 at 11:59 p.m.

Assembly Speaker Robin Vos, R-Rochester, is also taking public input for redistricting with a website where Wisconsin residents can submit their suggestions for district maps through Oct.15. Although the Legislature can consider the maps proposed by the commission, it isn't required to.

The U.S. Census Bureau released its data in August, officially kicking off this decade's cycle of redistricting. In Wisconsin, there are already several lawsuits related to redistricting, filed in both federal and state courts.