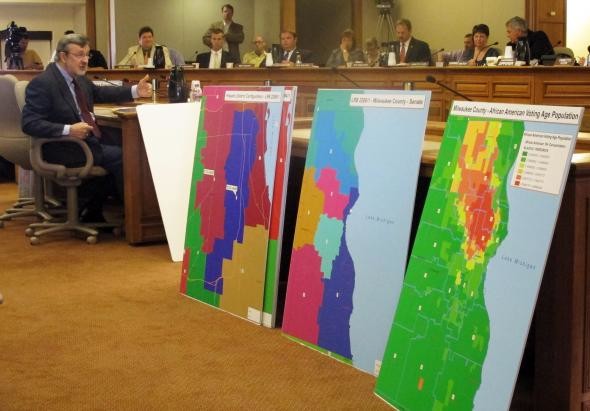 The People's Maps Commission Proposal Would Use Wisconsin's Recent Statewide Elections As Its Guide
By Shawn Johnson
Share:

A redistricting commission set up by Gov. Tony Evers will consider "partisan fairness" as one of its criteria for drawing its version of a legislative map for the next decade.

While the change sounds simple, it's a departure from the way redistricting plans have typically been drawn and could result in a Legislature that more closely resembles Wisconsin's statewide elections, which are consistently among the most narrowly divided in the nation.

Under guidelines approved Thursday night, any proposal drawn by The People's Maps Commission would still emphasize traditional redistricting criteria. Those include the idea of one person, one vote — making sure districts are roughly equal in population based on results of the latest census. Districts would also have to be compact and contiguous.

But once those criteria are satisfied, the proposal the commission approved Thursday would prioritize maps that emphasize "partisan fairness," which would be measured by assessing statewide partisan election results from the past five years Wisconsin.

Speaking to the commission Thursday, Moon Duchin, a redistricting expert and associate professor of mathematics at Tufts University, said "partisan fairness" would lead to maps where the composition of the Legislature changes as peoples' opinions change.

"We're going to call that pretty fair," Duchin told the commission. "And we're going to be able to defend that to everyday Wisconsinites as we travel around the state."

While Thursday's vote laid out the criteria the commission will use for its redistricting plan, it could be awhile before a new map is produced. Results from the U.S. Census won't be released until September, which is six months later than usual.

Any proposal from the commission would only be a suggestion. It would need to pass the full Legislature, where Republicans who drew the last map in 2011 still hold big majorities.

GOP leaders there have vowed to draw their own redistricting plan and have signaled they're unlikely to support any map the commission produces.

At the same time, Evers is likely to veto any redistricting plan that further cements the Republican majority for the upcoming decade. That sets up the prospect of a court battle over redistricting, where judges could be asked to consider the commission's proposal as one of the options.