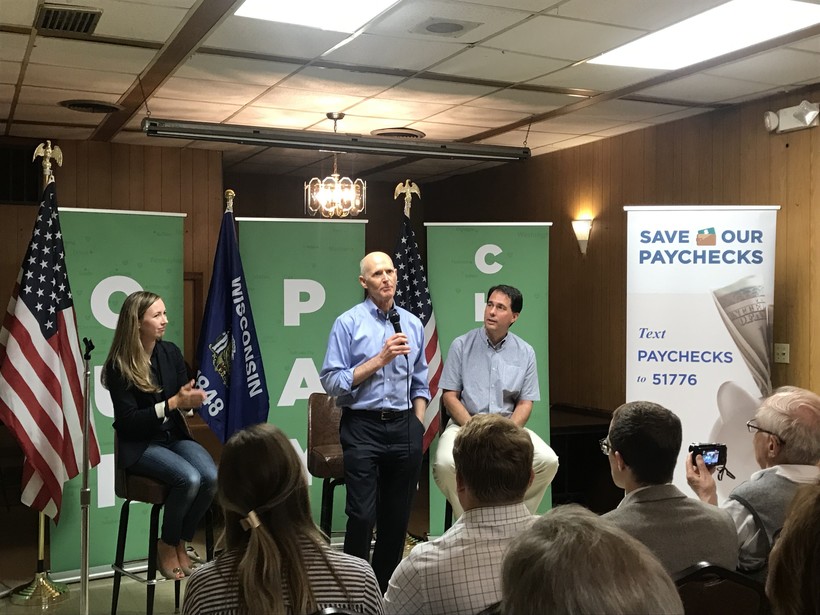 The two Republicans identified inflation, higher taxes and regulation as indicators that Democrats, who hold a majority in the U.S. House of Representatives and 50 seats in the U.S. Senate, aren't meeting the needs of small businesses and lower-income Americans — a key message as Republicans try to take back the House and Senate in forthcoming elections.

"I grew up in Bloomington, Illinois, we lived in public housing, I had a single mom, and I watched what she went through when we had inflation," said Scott. "We had to watch what everything cost, because things went up in price ... We're doing the exact same thing to the families in this country right now."

Inflation has been rising over the past few months. June's inflation rate was the highest it's been in nearly 13 years, most of it caused by pandemic-related bottlenecks in supply, such as a shortage of chips that has delayed the production of new cars and led to greater demand for used cars.

"We've still got a federal government, under Joe Biden and his left-wing allies, who are still paying people more not to work, more to be on government assistance than they were making on work," said Walker. "Anytime you go out for a fish fry, you go out around town or around the state, I can't tell you how many business owners actually put up signs that say 'Please forgive our slow service, forgive the time it's taking, we just can't find enough people to work.'"

The nationwide unemployment rate hit a 16-month low in July and nearly a million jobs were added. Data also shows that there are more job-seekers than open positions, though concerns over health, caregiving and other pandemic issues may have contributed to difficulty finding workers in certain sectors. The combination of state and additional federal unemployment benefits only exceed the average wages in three states. Wisconsin was not among them.

Democratic Party of Wisconsin spokesperson Julia Hamelburg said in an email that Gov. Tony Evers has been working with President Joe Biden to "build back better" from the pandemic.

"With continuing jobless claims hitting pandemic-era lows and the child tax cut delivering for working families, it’s clear the economy is bouncing back thanks to President Biden and Gov. Evers," she said. "Americans are getting hired at record rates, paychecks are going up, and the economy is shattering expectations."