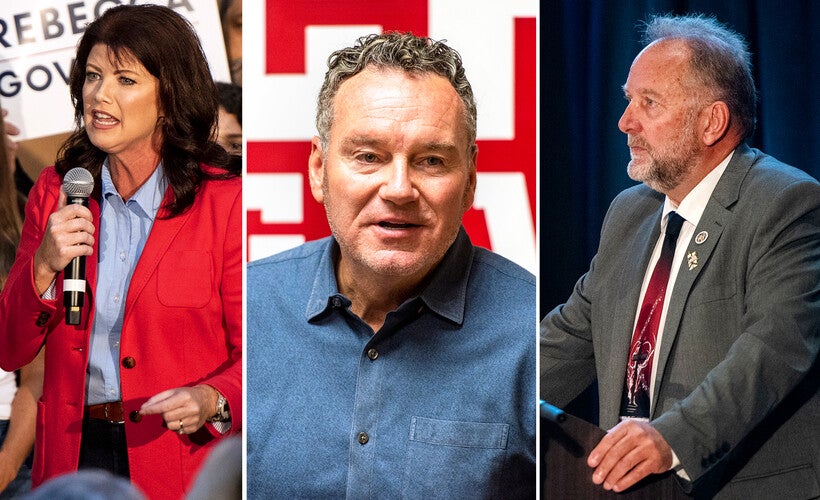 Tim Michels, the Trump-endorsed candidate in Wisconsin's race for governor, declined to endorse Trump should he run for president in 2024
By Shawn Johnson
Share:

The Republicans running for governor in Wisconsin all wanted former President Donald Trump's endorsement.  But at a debate Monday night, none of them would commit to endorsing him.

Their comments offered a snapshot in political time for Wisconsin Republicans, where former Lt. Gov. Rebecca Kleefisch, construction executive Tim Michels and state Rep. Tim Ramthun are all seeking the GOP nomination for governor. Trump's endorsement of Michels could tip the balance in the 2022 primary for governor, but even Michels would not commit to backing Trump should he run for president again in 2024.

"2024?" Michels said when asked about Trump. "I'm focused on this election right now."

The candidates were asked about Trump at a debate hosted by WISN-TV. The question came from Dave Meixelsperger of Hartford, a voter in the studio audience identified by moderators as a Republican who's concerned about Trump. Meixelsperger's question made reference to the violent insurrection at the U.S. Capitol following Trump's 2020 defeat.

"I would like to know if fortunate enough to be elected to the governorship for the great state of Wisconsin if you will support Donald Trump in 2024," asked Meixelsperger. "Even after the events that took place on Jan. 6, 2021."

Michels, who has shot up in the polls since Trump endorsed him on June 2, declined to endorse Trump.

"I have made no commitments to any candidates in 2024," Michels said. "What I'm focused on is beating (Democratic Gov.) Tony Evers."

Kleefisch, who like Michels visited Trump personally to seek his support, also kept her options open for 2024.

"As far as 2024 goes, I can commit to you that I will support the Republican nominee," Kleefisch said. "And it looks like we have an assortment to choose from."

Ramthun, who has wholeheartedly embraced Trump's calls to try to reverse his 2020 defeat, also declined to back Trump.

"Whether there's three or 13 or 33 people running for president in 2024 … he's going to have to throw his hat in the ring," Ramthun said. "And to be honest with you, I’m not exactly sure where the nation is right now with regard to whether or not they would vote for him again."

When moderators followed up to ask the candidates whether they thought Trump did anything wrong on Jan. 6, 2021, none of them blamed Trump for the events.

"He had a rally, and I think there were 60,000 people there," Michels said. "I haven't seen any evidence that Donald Trump said go to the Capitol now and storm it. I don't think he would have done that."

Michels said the hearings being held by the Select Committee to Investigate the January 6th Attack on the United States Capitol were being run by "a whole bunch of Democrats and … two liberal Republicans" to make Trump look bad.

"I don't think he did anything wrong," Michels said.

Kleefisch said she condemned the violence at the U.S. Capitol.

Ramthun referenced a "judiciary type oversight" looking into Jan. 6 but said he "won't speculate anything more."

Republicans were also asked whether they would sign legislation that would attempt to overturn the results of the 2020 election, a step election law experts – including the Legislature's own nonpartisan attorneys – have said is impossible. Only Kleefisch said she would not.

"It's not constitutionally possible," Kleefisch said. "You talk to any constitutional attorney and you consult our Constitution and statute and you'll see that there is no path to decertifying an election that has already happened."

Michels, who said at a previous GOP debate roughly a week ago that decertification would not be a priority as governor, indicated Monday that he would consider it.

"Everything'll be on the table," Michels said. "I'll make the right decision."

Ramthun, who authored a resolution that called for decertification, said he still supports it.

"I would sign legislation the nanosecond it hit my desk," Ramthun said.

The candidates' comments come days before Trump is scheduled to hold a rally for Michels in Waukesha and roughly a week before Wisconsin's Aug. 9 primary.

Democratic Party of Wisconsin Executive Director Devin Remiker issued a written statement after the debate Monday and said Republicans voters would have a clear choice in November between any of the Republicans and Evers.

"Regardless of which candidate emerges as the nominee, tonight’s town hall made it clear that every Republican running for governor is radical and wrong for Wisconsin," Remiker said.