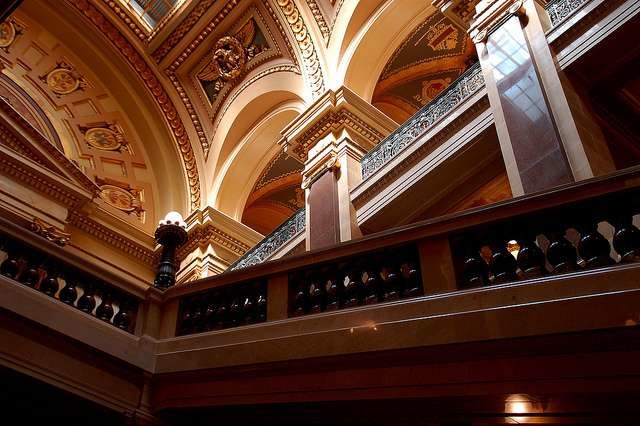 Top Republican state lawmakers struck last-minute agreements on key pieces of Gov. Scott Walker's election-year agenda on Tuesday as the state Senate convened for what legislators said would be the final day of their 2018 legislative session.

Prior to Tuesday, Republicans had been at odds over the governor's plans to cut taxes, pay for school safety measures and close the troubled Lincoln Hills juvenile prison.

But the Senate passed versions of all three bills that Senate Majority Leader Scott Fitzgerald, R-Juneau, said were aimed at getting both houses of the Legislature onboard.

The Assembly could approve the changes when it meets in an "extraordinary session" on Thursday.

Senators voted 28-4 for a slightly amended version of the governor's plan to spend up to $100 million on new school security enhancements.

"It puts $100 million into both public and private schools throughout Wisconsin to improve their physical security," said Fitzgerald moments before the Senate passed the plan. "I can't believe there'd be anybody in this body that would vote against this bill."

While several Democrats criticized the plan for failing to put any new restrictions on gun purchases, most supported the plan in the end.

"This is a tough one," said Senate Minority Leader Jennifer Shilling, D-La Crosse, who voted yes on the plan. "I'm going to feel empty when I leave."

Also supporting the plan was state Sen. Kathleen Vinehout, D-Alma, one of the Democratic candidates for governor.

"For those schools that really, really hurt right now, it's a start," Vinehout said. "It's a step in the right direction."

Sen. Dave Hansen, D-Green Bay, one of four Democrats who voted against Walker's plan, shouted at his colleagues that they had let down the thousands of students who marched at the Wisconsin state Capitol and elsewhere calling for restrictions on gun purchases.

"The adults can't get it done," Hansen said. "The youth will."

The Senate's proposal now heads to the Assembly, which could send it to Walker's desk Thursday.

Democratic senators tried to amend the bill with a plan that would expand background checks to more firearm purchases and ban bump stocks like the one used in last year's mass shooting in Las Vegas.

Republicans used a procedural maneuver to block that plan on a party line vote.

Senators had been pushing a different version of a bill that would close the troubled Lincoln Hills youth prison north of Wausau, but the final bill they passed unanimously differs only slightly from one that passed the state Assembly.

The Assembly's version of the bill would create a mix of smaller state- and county-run institutions to replace Lincoln Hills and set aside money to pay for them.

The Senate version would give the Legislature's budget committee more control over the institutions that replace Lincoln Hills. It would also give the Senate majority leader, not the Senate president, the power to appoint members to a commission that will make suggestions on the state's juvenile corrections policy moving forward.

The amended plan now heads back to the Assembly, where Vos' office has said it will pass.

Like the Senate, the Assembly passed its earlier Lincoln Hills bill on a unanimous vote.

The Senate's vote came just hours before the Wisconsin Department of Corrections announced a $19 million settlement with a girl who was severely brain damaged after attempting suicide at the Copper Lake School for Girls, which is situated on the same grounds as Lincoln Hills and would also be slated for closure

When it comes to Walker's tax cuts, Assembly Republicans passed a bill last month that would create both a $100-per-child tax credit and a sales tax holiday on all purchases under $100 for the first weekend in August.

Fitzgerald said it would decrease the overall cost of the sales tax holiday from roughly $50 million to about $12 million.

"We're all looking at what's the final balance," Fitzgerald said. "And I think people thought the $50 million price tag was too costly."

Walker's child tax credit, which would be paid out to parents by September, would still cost state government roughly $122 million under the Senate's plan.

The plan passed on an unusual 17-15 vote with Sen. Luther Olsen, R-Ripon and Sen. Robert Cowles, R-Green Bay, joining most Democrats in voting no, while Sen. LaTonya Johnson, D-Milwaukee, joined most Republicans in voting yes.

Vos said after the vote that he would back the Senate's changes.

"While it's not everything I hoped for, I support their proposal," Vos told the Associated Press.

Not included on the Senate calendar Tuesday was Walker's plan to create a $50 million rural economic development fund. That means it likely won't pass this year.

Another bill that's likely dead is Walker's plan to spend as much as $7.8 million per year on Foxconn-style incentives for consumer products maker Kimberly-Clark, which has said it plans to close two northeast Wisconsin plants and cut 600 jobs.

"They don't look like they're even close to having some type of concession from the union that would allow them to move forward to even accept a deal," Fitzgerald said of Kimberly-Clark. "So it makes it difficult for us to act right now on Kimberly-Clark until we kind of know whether or not it's going to be accepted."

While the Senate made changes to Walker's plans Tuesday, if the governor's entire 2018 agenda had become law as originally proposed, it would have significantly drawn down state government's general fund balance.

But if all of the bills that already passed the Assembly had passed the Senate and became law, the Legislative Fiscal Bureau says they would have reduced the state's gross general fund balance to just $192 million.

Because some of Walker's proposals won't pass the Legislature, the final cost will be smaller. That final number won't be known until some time after the Assembly finishes its business later this week.

Senators also passed dozens of other bills during what was likely their final regular session day of 2018, including: