Gov. Tony Evers addresses a joint session of the Legislature in the Assembly chambers during the Governor's State of the State speech at the state Capitol, Tuesday, Jan. 22, 2019, in Madison, Wis. Andy Manis/AP Photo

Evers made the comment Monday after calling the Republican-controlled Legislature into a special session — which will take place Nov. 7 — to take up a pair of gun control measures that GOP leaders have been unwilling to debate.

Since taking office in January, Evers has called on the Legislature to pass gun safety reform.

The first piece of legislation would have expanded universal background checks in Wisconsin. The second was a bill to create an extreme risk protection order process — often called a "red flag" law — which would allow loved ones and law enforcement to petition to have guns taken away from an individual if a judge deems them a danger to themselves or others.

"After calling for these important pieces of legislation, giving Republicans the opportunity to hear the people of our state and to do the right thing and providing ample opportunity for time for them to do so, unfortunately the Republicans did not act," Evers explained at a Monday press conference at Milwaukee City Hall.

The move Evers announced Monday doesn't force Republicans to debate or vote on the bills. But it does give Democrats another means to spotlight the issues that a Marquette University Law School poll in August showed more than 80 percent of the public support.

"This is what the majority of people want," Evers said. "Each and every day that elected officials chose not to take gun violence seriously, that’s a choice that has significant consequences."

Evers said the Legislature owes the public an up or down vote on the bills.

"There are common sense solutions that we know can save lives because they have already done so in states that have adopted them," Evers said. 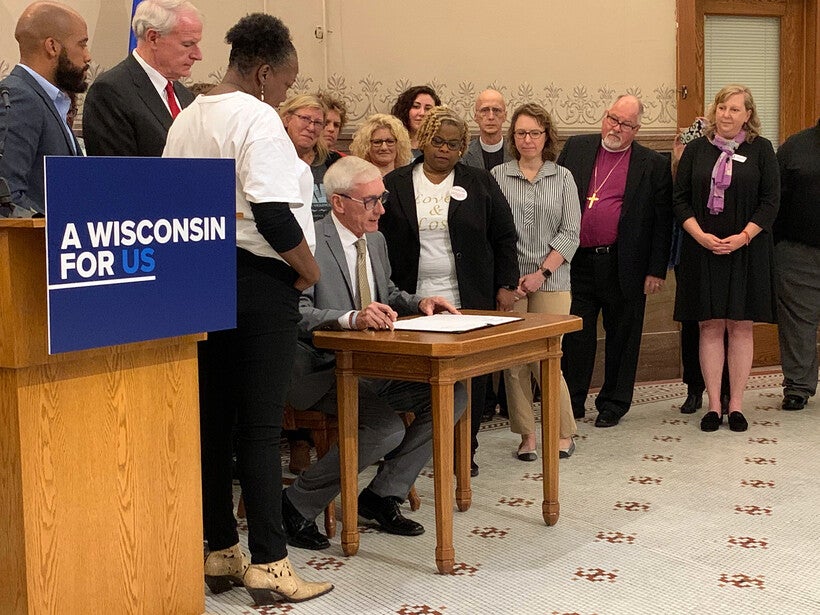 Gov. Tony Evers at a press conference in Milwaukee after calling a special session of the Legislature on gun control. Alana Watson/WPR

This is the first special session Evers has called as governor.

"We aren’t talking about theory here. We are talking about actions that the Legislature can take that will literally save lives in the state of Wisconsin," Barrett said. "We are fortunate to have a governor who is clear-eyed and who is courageous enough to take on the opponents of this type of legislation."

"It’s time for us to realize the devastation of what firearms in the wrong hands are doing to our communities," Barnes said after acknowledging the various gun control groups at the press conference. "But more than that, it’s time for us all to act."

"It’s easy to see how today’s action could just be the first attack on the Second Amendment," Fitzgerald said in the statement. "The Senate will not be part of a drawn-out strategy to infringe on constitutional rights."

"A special session call will not change where my Assembly Republicans colleagues and I stand on protecting the Second Amendment rights of Wisconsin citizens," Vos said. "Assembly Republicans are committed to bringing people together by working on legislation that addresses important issues affecting the state including water quality, suicide prevention, homelessness and adoption."