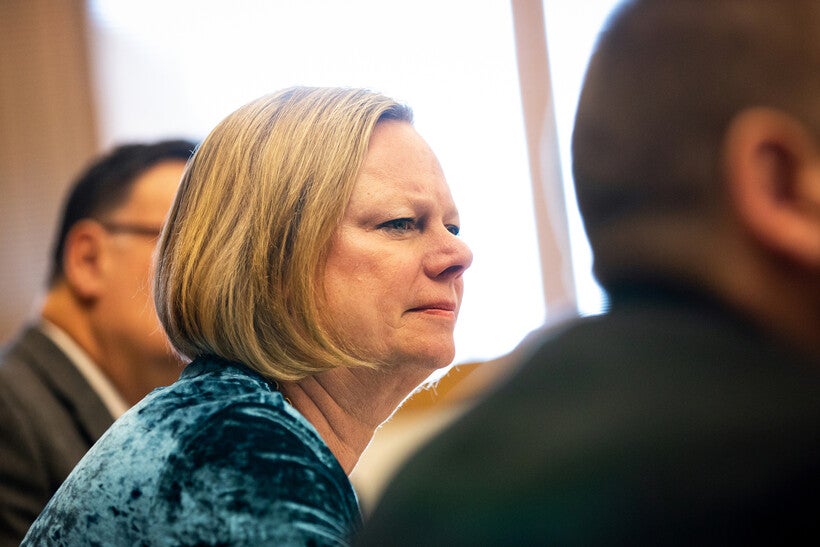 State Rep. Cindi Duchow, R-Town of Delafield, recently introduced a constitutional amendment to require judges to consider the danger a defendant poses to the community when setting bail amounts. Right now, judges in Wisconsin are only supposed to use bail as a tool to ensure the accused appears for the next court hearing. Duchow is seen at a 2018 meeting of the Legislative Study Committee on Bail and Conditions of Pretrial Release in Madison, Wis. Emily Hamer/Wisconsin Watch

Republican lawmakers have revamped a push to amend the state constitution to give judges more leeway when setting cash bail for those charged with crimes. Members of the state Assembly voted by a margin of 70-21 to start the multi-year process again.

The effort comes months after Darrell Brooks Jr. killed six people and injured dozens more during a Waukesha holiday parade while awaiting trial on a $1,000 cash bail for prior crimes, an amount which the Milwaukee County District Attorney's Office said was inappropriately low.

Under the Wisconsin Constitution, those accused of crimes are eligible for release before conviction under conditions aimed at protecting members of the community from serious bodily harm, preventing witness intimidation and ensuring they appear in court.

One of those conditions is what is known as cash bail, an amount of money paid by the defendant to leave jail as they await trial.

Currently, judges can only consider whether cash bail is necessary to assure a defendant returns to court along with other conditions aimed at preventing serious bodily harm to community members.

Joint resolutions before the Wisconsin Assembly and Senate would allow judges to consider other factors when setting cash bail amounts like a defendant's prior criminal history; the need to protect community members from serious harm as defined by lawmakers; the need to prevent witness intimidation; the likelihood they will appear in court; and the potential defense a person accused of a crime might use.

During an Assembly floor session Tuesday, joint resolution author Rep. Cindi Duchow, R-Delafield, said the idea for the legislation came after a man in her neighborhood who had pled guilty to child molestation posted bail and was allowed to stay at home before sentencing. She said with crime growing across Wisconsin, mainly in Milwaukee, the Legislature needs to give more latitude to the court system when deciding pretrial conditions and bail amounts.

"So, let's give our judges the tools, so they can keep violent people off the streets," said Duchow. "Let's let the people in Milwaukee and the state of Wisconsin decide if this is what they want, because I'm going to tell you in my district, they're screaming for this."

Opponents of changing how cash bail is assessed by judges said it will exacerbate a system that winds up keeping people in jail when they can't afford to pay.

Assembly Speaker Robin Vos, R-Rochester, also spoke in favor of the resolution. He said he didn't always support changing the state's constitution to address Wisconsin's cash bail rules but said with the Waukesha holiday parade tragedy and a surge of homicides in Milwaukee, it's time for lawmakers to act.

State Rep. Evan Goyke, D-Milwaukee, agreed with Republican members that action is needed, but said changing rules surrounding cash bail is not the way to do it. Goyke said he was a member of a recent legislative study committee on bail and pretrial release, which included judges, prosecutors and defense attorneys, and none of them talked about using cash bail as a way to keep people who might be a risk to the community in jail.

Instead, Goyke said the committee focused on fixing an existing, but unworkable pretrial detention law passed in the 1980s.

Goyke pointed to a 2018 case in Calumet County where a man paid a $10,000 cash bond and was released from jail after being charged with felony domestic violence only to kill his wife days later. He also mentioned a 2009 case in which a former surgeon who had been charged with driving under the influence of illegal prescription narcotics and killing a pregnant mother and her daughter posted a $500,000 bond and later violated terms of his release.

Adam Plotkin is a lobbyist with the Wisconsin State Public Defenders Office. In written testimony, he said the legislation includes provisions that run counter to the 5th and 8th Amendments of the U.S. Constitution. He said judges can already consider public safety, the seriousness of an offense and prior convictions when setting conditions of release other than bail.

Plotkin told WPR that cash bail creates a two-tiered system for people with means to avoid being locked up while awaiting trial while those without stay behind bars. He said that often has a disproportionate impact on people from minority groups.

"What we know from our experience is that the more cash bail is used, the more people are held pretrial," Plotkin said. "And again, that is disproportionately impacting people in poverty and people of color."

Plotkin said Wisconsin's bail system needs reform and expanding it is not the answer. He pointed to a nine-county pilot program being run by the Wisconsin Department of Justice that uses a public safety assessment tool that considers things like a defendant's age, whether an offense is violent and prior convictions to predict whether that person is likely to show up to court or re-offend after being released.

Changing the state constitution takes a minimum of two years. The joint resolution approved by the Assembly has to be approved by the state Senate by the end of this session. It then must be passed again in the next legislative session and approved by voters in a subsequent election.

This is the second attempt by Republican lawmakers to change bail setting procedures. A similar joint resolution was introduced in 2017 but failed to pass by the end of the legislative session.