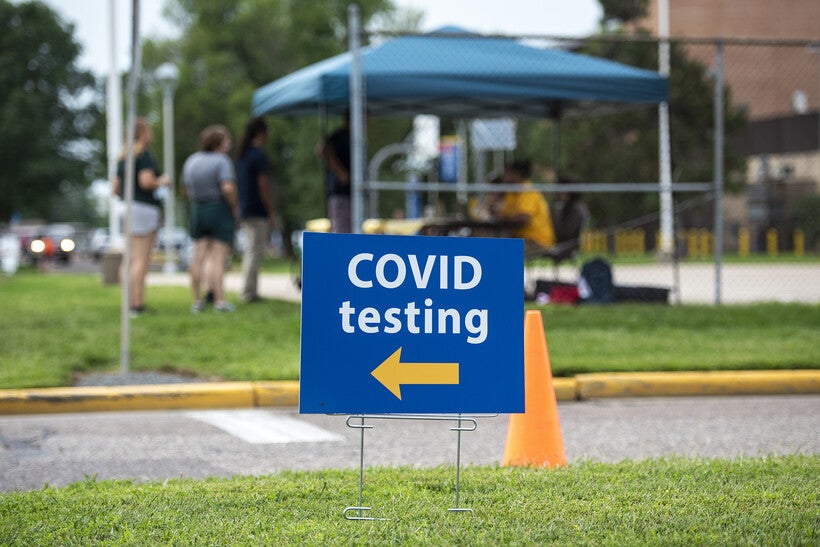 A sign points to a location on UW-Eau Claire’s campus where students can be tested for COVID-19 on Saturday Aug. 28, 2021. Angela Major/WPR

A state senator is officially requesting that the Wisconsin state Legislature sue the University of Wisconsin System for refusing to seek Republican approval of campus COVID-19 safety measures. While some Republican lawmakers have argued against legal action, the final say will come from leaders in the state Assembly and Senate.

On Aug. 3, the Republican-led Joint Committee for Review of Administrative Rules held a paper ballot voting 6-4 to order the UW System to submit COVID-19 rules including testing and mask mandates to the committee for approval.

The committee's co-chair, state Sen. Steve Nass, R-Whitewater, opposes such mandates and has argued UW System chancellors are acting outside the law by requiring masks and testing for students and campus visitors.

On Aug. 24, UW System interim president and former Republican Gov. Tommy Thompson refused to comply with the order and stated the UW Board of Regents and system president have "complete authority" under state law to regulate campus buildings and keep students and employees safe.

The committee's order gave the UW System until Thursday to comply with its order or drop COVID-19 testing and mask mandates. In response, Thompson and Board of Regents President Edmund Manydeeds sent a letter to Nass and the Committee's other co-chair, state Rep. Adam Neylon, R-Pewaukee, detailing why the UW System wouldn't comply.

"On its face, this directive is overly broad and lacks reasonable specificity by which to evaluate and discuss concerns rationally," wrote Thompson and Manydeeds.

It also noted that the committee "took no action" regarding mask and testing mandates over the past 14 months.

"We believe this further indicates the tacit acknowledgment of our longstanding authority to protect the health, safety, and welfare of our campus communities," wrote the UW leaders.

Lastly, Thompson and Manydeeds pointed to a bill introduced by Nass in May that would have prohibited the UW System and the Wisconsin Technical College System from requiring COVID-19 testing.

"That proposed legislation was not ultimately taken up or adopted by the legislature," wrote Manydeeds and Thompson. "Additionally, we find it notable that the legislature recognized that it would need to seek to pass new legislation with express restrictions or prohibitions in order to limit our broad, existing statutory authority."

In an email sent to Republican lawmakers, Aug. 27, Nass offered a legal analysis for his push to require the UW System to submit COVID-19 protocols for approval. In it, Nass stated that his office has been raising concerns about the UW's mandates since July 2020 through phone calls with UW System state relations director Deej Lundgren and Thompson's chief of staff Dean Stensberg.

In response to the UW System's refusal to submit an emergency rule proposal outlining COVID-19 safety protocols on Thursday, Nass issued a press release, stating he will submit a request to Assembly Speaker Robin Vos, R-Rochester, and Senate Majority Leader Devin LeMahieu, R-Oostburg, to file a lawsuit against the UW System to force compliance.

Over the past week, Assembly Majority Leader Jim Steineke, R-Kaukauna, and state Sen. Rob Cowles, R-Green Bay, have announced their opposition to suing the UW System for not submitting coronavirus safety measures for legislative approval. The pair argued that a lawsuit challenging COVID-19 measures at the start of the fall semester would cause unnecessary confusion for students and employees.

In an interview with WPR Friday, Cowles said he believes that the UW System has the authority to regulate its campus buildings and keep students safe. He said he also believes financial incentives offered by Thompson to boost voluntary vaccinations at UW campuses coupled with mask and testing requirements "are working to keep the campus open."

Cowles said state law allows Vos or LeMahieu to sue the UW System over COVID-19 mandates unilaterally, but he doesn't want to see that happen.

"So, it's possible some private entity would sue instead," said Cowles. "It's possible, I would hope they would not do that."