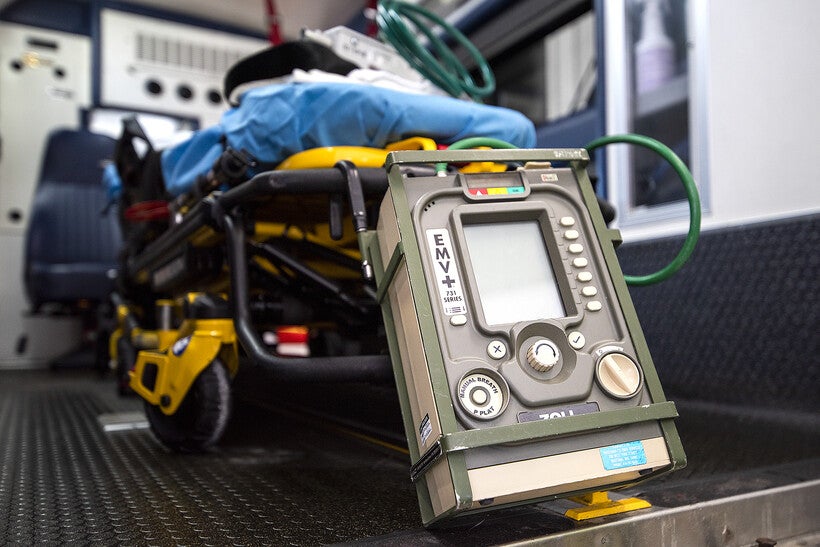 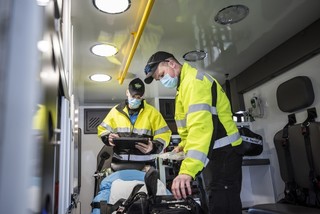 When Someone Calls 911, There's No Guarantee Help Will Come For Several Northern Wisconsin Towns

Response times for fire and emergency medical services in Ozaukee County are longer than comparable areas, according to a new report by the Wisconsin Policy Forum.

The Forum was asked by Ozaukee County municipal leaders and fire chiefs to look at response times for the fire departments of Belgium, Cedarburg, Fredonia, Grafton, Mequon, Port Washington, Saukville, Thiensville and Waubeka.

The nonpartisan research group found as the populations in the suburban communities have grown and aged, the departments have experienced an increasing number of calls while struggling to recruit staff.

The nine fire departments rely largely on part-time paid and unpaid volunteers who are not stationed at fire houses, according to the report.

Fire and EMS spending levels per capita in Ozaukee County are also considerably lower than other counties where the Forum has conducted research including Milwaukee, Racine and La Crosse counties. For example, the cities of Mequon and Cedarburg spend about $70 per capita on fire and EMS compared to the city of Brookfield, which spends about $250 per capita.

The Forum has done several fire and EMS studies over the last eight or nine years, but Rob Henken, president of the Wisconsin Policy Forum, says what they’ve found in Ozaukee County shows changes to the services in the county need to be immediately addressed.

"This is a model that over the years has worked well for them, they’ve been very creative, there has been some impressive fundraising that has gone on," Henken said. "But I think we heard across the board, from all the chiefs, that this model is just not sustainable for the future."

The report, commissioned in 2019 and released Friday, found staffing challenges were most evident in November and December during the surge of COVID-19 cases in Wisconsin. 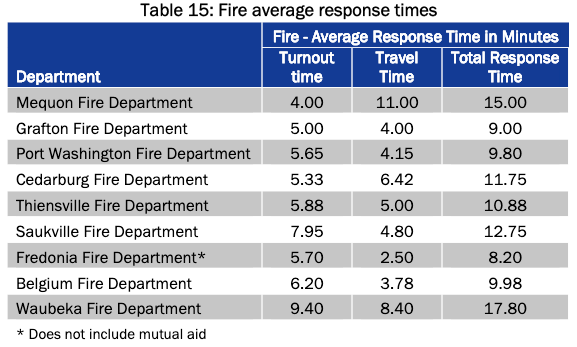 Table 15 of the Wisconsin Policy Forum report on Ozaukee County fire and emergency medical services shows response times by department for fire calls as provided by the nine departments of Belgium, Cedarburg, Fredonia, Grafton, Mequon, Port Washington, Saukville, Thiensville, and Waubeka. Data on response times is included to give a general sense of the level of service, rather than to provide a way to compare one department to another, according to the report. Wisconsin Policy Forum

The American Medical Association compiled EMS response times for 485 agencies across the United States in 2017 and found in suburban areas with populations between 2,500 and 50,000 people, response times average 7.7 minutes from dispatch to arrival on scene. The North Shore Fire Department, in northern Milwaukee County, uses a full-time staffing model. It's average response time for the first three quarters of 2020 was 5 minutes and 32 seconds, according to the department's website.

Henken said societal changes have made it difficult to rely on people who can be called in when call volumes are the highest, which is typically during the day.

EMS calls account for 80 percent of total calls in Ozaukee County with the Mequon, Port Washington and Grafton departments having the highest activity levels, according to the report. Call volumes are growing in most jurisdictions with increases exceeding 30 percent in Fredonia. 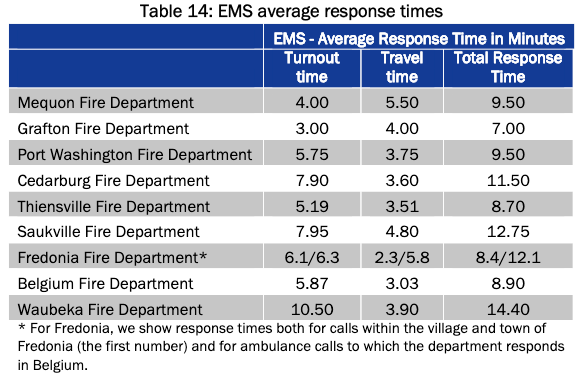 Table 14 of the Wisconsin Policy Forum report on Ozaukee County fire and emergency medical services shows response times by EMS for calls as provided by the nine departments of Belgium, Cedarburg, Fredonia, Grafton, Mequon, Port Washington, Saukville, Thiensville, and Waubeka. Data on response times is included to give a general sense of the level of service, rather than to provide a way to compare one department to another, according to the report. Wisconsin Policy Forum

The Forum didn’t make a specific recommendation to improve response times for the departments, but did give Ozaukee County leaders some options.

One would be to maintain independence, but jointly pay full-time paramedics to work county-wide in strategic locations where call volumes are high.

Another option would be to partially consolidate the departments, using Grafton and Saukville as a hypothetical model or a scenario where the existing Ozaukee County departments merge into two departments, one for the northern part of the county and another for the southern portion.

The Forum also presented a model where Ozaukee County merges all of its departments.

"Which may best position Ozaukee County citizens and taxpayers to maximize the general benefits of consolidation," the report states. "The second (partial merger) is a lower-priced approach that may more appropriately reflect Ozaukee County’s call volumes and density."

William Rice, fire chief in the Village of Grafton, said ideally, he thinks one department would be best, but that could be difficult to accomplish politically.

Now, each community will independently review the report with the researchers.

"I suspect there will be some communities that won’t be interested in doing anything, there will be some that know they need to do something and will do it very quickly, they may provide more leadership than others," Rice said. "I think the next step now is let each community review the study and conduct community discussions on the problem."

Ozaukee County is not the first community to deal with long response times for EMS services and thoughts of consolidation.

In 2019, the Forum completed a report saying eastern Racine County could benefit from consolidated services.

In 1995, the municipalities north of Milwaukee consolidated fire departments and dispatch services. Today, the North Shore Fire and Rescue covers the city of Glendale and the villages of Bayside, Brown Deer, Fox Point, River Hills, Shorewood and Whitefish Bay. The seven municipalities have a combined population of approximately 65,000 and cover 25 square miles.

Henken said those seven communities would have collectively been spending $2.8 million more than they are spending for the Northshore Fire Department if they had each individually moved forward with providing their own communities with the same level of service.

"A big question is to the extent there is these intensifying problems with regard to recruitment and retention, and increasing call volumes, what is the proper level? Ozaukee County is not the North Shore," Henken said. "There is much lower population density (in Ozaukee County), there is a much larger greater geographic area. This isn’t to suggest that model, but it is to suggest there are certain elements of that model that the Ozaukee County communities should be working toward."

Henken had a virtual public meeting with Ozaukee leaders Thursday. He said there is likely to be an extensive county-wide discussion about the future of EMS services.

"We are detecting a sense of urgency in terms of doing something to address some of the most immediate and striking service challenges," Henken said.