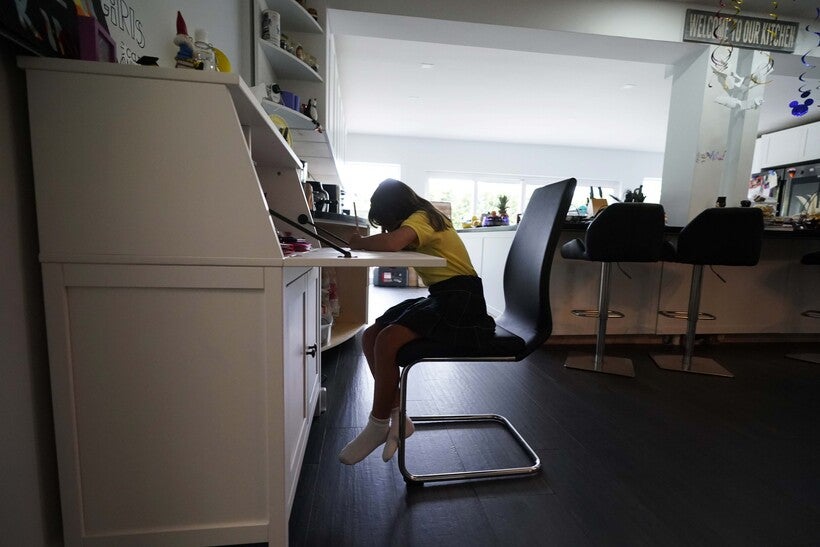 Emily Chao works on a writing exercise after having finishing remote learning for the day, Thursday, Oct. 1, 2020, at her home in North Miami Beach, Fla. Rather than wait to see how the Miami-Dade school system would handle instruction this fall, Erica Chao enrolled her two daughters in a private school that seemed better positioned to provide remote learning than their public elementary school was when the coronavirus first reached Florida. Wilfredo Lee/AP Photo

Report: More teen girls are being treated for suicide attempts than before the pandemic

More teen girls are being treated in emergency rooms for suicide attempts than before the pandemic, according to an annual report released Tuesday from the Wisconsin Office of Children’s Mental Health.

The report says state data shows a trend similar to national data that found around 50 percent more teen girls between the ages of 12 to 17 were treated in emergency rooms for suicide attempts from mid-February to mid-March last year than the same period prior to the pandemic. Data shows the number of boys treated for suicide attempts grew by roughly 4 percent.

In a virtual presentation, Linda Hall, director of the Office of Children’s Mental Health, added that at least one third of Wisconsin’s young adults between the ages of 18 to 24 experience anxiety most days. The findings are based on a survey conducted between October 2020 to September 2021.

"The pandemic has been rough on kids, especially kids and families experiencing lost income, housing instability or food insecurity," said Hall. "We see the continuation of the pre-pandemic years long trend of increased anxiety and depression among youth."

Pre-pandemic data shows 16 percent of Wisconsin teens were considering suicide, 7 percent had attempted suicide and 29 percent of high school students felt sad or hopeless. The figures were below the national average, but they reflected an increasing trend statewide that doesn’t include the increasing mental health concerns since the onset of the pandemic.

Prior to the pandemic, Wisconsin made gains in the number of social workers, counselors and psychologists in schools, as well as the number of psychiatrists. Even so, officials say the numbers are still far below what’s needed to address rising demand.

Around 40 percent of kids with diagnosed mental health conditions were unable to receive treatment and 16 percent were hospitalized for mental health issues prior to the pandemic.

In December, the U.S. Surgeon General called for a coordinated response to the crisis as the pandemic has intensified mental health challenges among children.

The challenges facing youth is something that James Hulce has encountered firsthand. Hulce is a college student from Waukesha County who's received training as a partner working with the Office of Children’s Mental Health. He recalled an experience late one night last year with an individual making dark and disturbing comments online.

Hulce asked whether the individual was contemplating suicide. They replied, "Yes."

"My fellow student just needed someone to be there with them as they experienced a tough time," Hulce said.

The two talked for hours that night and in the days following to draw up a safety plan and connect with university resources, Hulce said. Now, he said the individual is doing better, but just two months later, Hulce assisted another student in crisis.

"When the emergence of a global pandemic thrust our learning and work online, institutions scrambled to deliver material in new formats," said Hulce. "Left out, I fear, was a hidden curriculum of social and emotional learning in interpersonal relationships. Without supportive peer connections, who will notice someone in crisis and take action?"

He said routine check-ins should be built into work and personal interactions to counter deepening mental health issues.

Hall said the Office of Children’s Mental Health has been focusing on fostering social connections among children to provide safe, stable relationships for youth to weather upheaval that families have experienced during the pandemic.

The state’s report found about 40 percent of Wisconsin families lost income during the first few months of last year. Black and Latino families were most affected by the economic downturn.

During the same timeframe, two-thirds of families said their children were learning remotely for at least some classes. Last summer, one in five families with kids said they were dealing with child care disruptions related to the pandemic.

Almost half of Wisconsin parents said they were feeling down, depressed or hopeless at the beginning of the 2021-22 school year.

"Parental stress is another critical factor because when parents are stressed, kids pick up on it and often become more anxious," Hall said.

The Office of Children’s Mental Health is providing tools that include lesson plans for schools, a mental health crisis card and feelings thermometer to help youth experiencing mental health challenges.