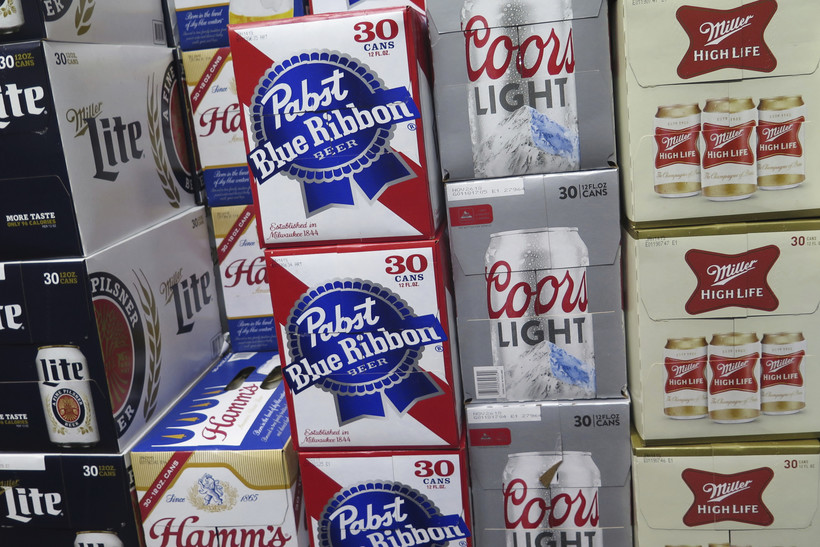 In this Nov. 8, 2018, file photo, cases of Pabst Blue Ribbon and Coors Light are stacked next to each other in a Milwaukee liquor store. Ivan Moreno/AP Photo

The nonpartisan Wisconsin Policy Forum released findings Wednesday that show revenue from state excise taxes on alcohol during the year that ended June 30 increased almost 17 percent over the $63.3 million they brought in the prior year.

The increase likely will be the largest percentage jump since 1972 if the preliminary data holds.

Between 2009 and 2020, the percentage increase in alcohol tax revenue exceeded 2.4 percent in only one year.

Mark Sommerhauser, Wisconsin Policy Forum researcher, said he and his colleagues suspected alcohol consumption was up during the pandemic. But with bars and restaurants closed for months in 2020, he said he was curious to see what alcohol tax data would show.

"Let's face it, people were super, super stressed over the last year with maybe their job situation or their kids' school or day care or who knows what else," Sommerhauser said. "There's just kind of a brew of factors, sort of a confluence of things coming together here, that I think are potentially concerning."

The report shows that during the 2021 fiscal year, which ended June 30, taxes on liquor increased by more than 18 percent over the 2020 fiscal year. During the same period, taxes were up by around 10 percent for beer and wine, while revenues from hard cider sales increased by just more than 16 percent.

Sommerhauser said liquor sales had been "increasing at a decent clip" prior to the pandemic, but they accelerated over the past year.

"It certainly seems like something that needs to be on our radar screen just because, even before the pandemic, we know that excessive alcohol use and binge-drinking were some of the biggest public health concerns that we had in Wisconsin," Sommerhauser said.

National studies show people have been consuming more alcohol, especially women with young children, during the pandemic, said Julia Sherman, coordinator for the Wisconsin Alcohol Policy Project at the University of Wisconsin-Madison Law School. She said other research has found that people who increased alcohol consumption to cope with natural disasters, like Hurricane Katrina, didn't slow their drinking afterward.

"And that is the big question," said Sherman. "Will the drinking subside as this crisis fades? As we are able to get back to normal or the new normal? Will we all go back to the previous level of alcohol consumption? And based on this other reporting, it's not as likely as we might hope."

Sherman said state and local policymakers need to find better ways to promote "low-risk" alcohol consumption, like moderation. She also said recent bills authored by Wisconsin lawmakers to allow for home delivery and curbside pickup of alcohol are unnecessary and could exacerbate binge-drinking.

In 2019, UW-Madison's Population Health Institute found 24 percent of Wisconsin adults engage in binge-drinking compared to 16 percent nationally. Wisconsin ranked second in the nation for binge-drinking, according to the report.