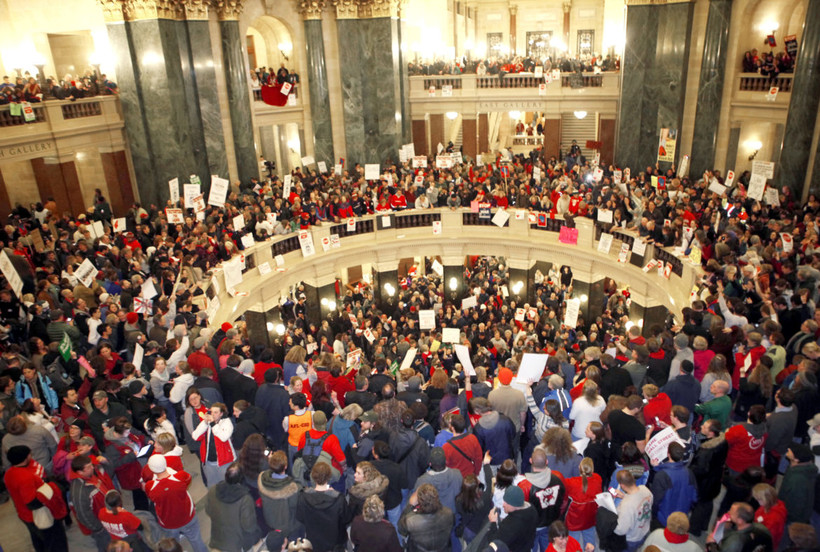 Thousands of demonstrators flood Wisconsin’s Capitol building on March 9, 2011, to protest the Senate passage of the Wisconsin budget repair bill, later known as Act 10. The bill stripped collective bargaining rights from most public sector employees and prompted the recall of several state senators, including the unsuccessful recall of Gov. Scott Walker. The bill was fast-tracked through the Legislature, passing in just 24 days. One in every four bills passed during the 2011-12 session were fast-tracked, a Wisconsin Center for Investigative Journalism analysis found. Mike DeVries/The Capital Times

State posts largest decline in union membership in workforce in the nation
By Christine Hatfield
Share:

Wisconsin experienced the largest drop in workforce union membership of any state since the start of the century, according to a Wisconsin Policy Forum report released Tuesday. The shift represents sweeping changes in the private and public sectors.

"(N)early all states have seen a decline in the concentration of their workforce that is unionized over the last 20 years, but none more so than Wisconsin," the report said.

The state's 9.9 percent drop was the largest in the country, beating the national average of a 3.1 percent loss.

Ari Brown is a senior research associate with the nonpartisan Wisconsin Policy Forum. He said one explanation is a decline in manufacturing and construction jobs.

"Over the course of decades, but especially over the last couple of decades, those jobs have really started to go away," Brown said.

"There has not been something on the level of Act 10 really anywhere in the country," Brown said. "It's very likely a contributor to the very steep decline in public sector union concentration you see in Wisconsin."

According to Brown's report, Wisconsin has led trends in unionization over the years. It was the first state to let public sector unions negotiate contracts. But it also severely limited unions' collective bargaining power with Act 10.

"Wisconsin has really been a leader with unions in general, both in terms of building them up and then curtailing them," Brown said.

Brown said the requirement that 51 percent of all union members vote in favor of recertification has made the process even more laborious.

"If you have a large union, and for whatever reason, not everyone was voting, it's gonna be really, really difficult to annually recertify," Brown said.

The changes have affected some areas of public sector employment more severely than others. According to the report, 148 county employee unions have taken votes in the last decade, and only five were successfully recertified last year. Meanwhile, 194 teachers' unions, or 56 percent of those represented in the data, are still bargaining.

"On the right, you have the decline in unions, that it's kind of welcomed as a win, especially for taxpayers," Brown said. "The left would kind of argue, you know, it's a really big blow to workers, it's a blow to income inequality, especially when you're talking about the public sector."

Brown noted generally, low unemployment rates and challenges in hiring have given employees more leverage for starting unions and negotiating contracts. He pointed to efforts on the part of Colectivo Coffee workers to unionize, a campaign that remains ongoing. Some Wisconsin Starbucks locations have also pushed for unionizing.

"There's been so much of this discussion very recently about unionization, because we're in such a hot labor market right now," Brown said. "A lot of this conversation does come down to wages, but it also does come down to things like work rules."

Brown said the extent to which the drive for unionization continues in the future will also depend on factors like inflation, wage increases, immigration and retirement.