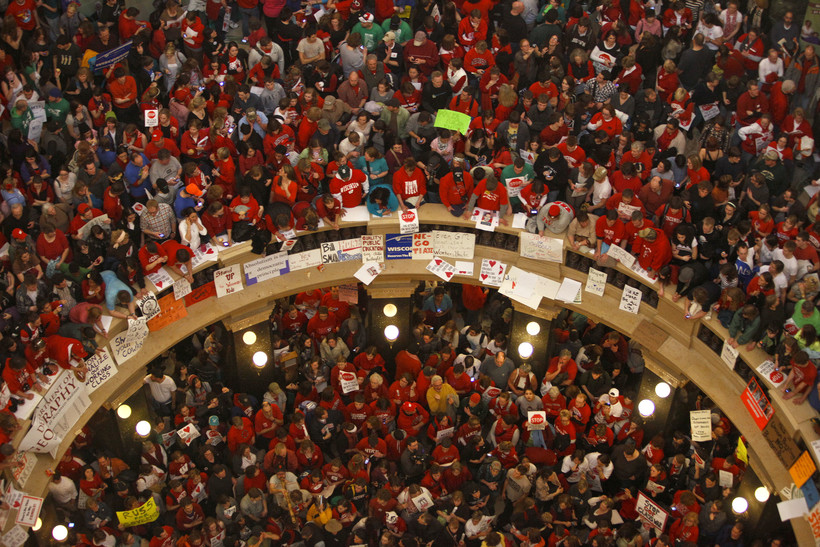 A Decade After Act 10, It's A Different World For Wisconsin Unions

With Their Numbers On The Decline, Public Sector Unions Have Had To Reimagine What It Means To Organize
By Shawn Johnson
Share:

When tens of thousands of union members and supporters flocked to the state Capitol a decade ago, they warned that Gov. Scott Walker's collective bargaining bill could redefine organized labor in Wisconsin. They were right.

Walker, a freshly sworn in Republican, formally introduced the plan on Feb. 11, 2011, describing it as a "modest" change aimed at shoring up the state budget. But the bill he introduced went well beyond financial concessions. It effectively eliminated long-held bargaining rights for a wide range of state and local government employees, from teachers to clerical workers to prison guards.

Two days after Walker spoke, dozens of teachers from around the state gathered on the Capitol Square in Madison for one of the first protests against the law now known as Act 10.

"We could lose this fight," said Charles Patten, who was then a teacher in Wausau. "We must help our neighbors, all of the citizens of Wisconsin see that union rights are every worker's rights." 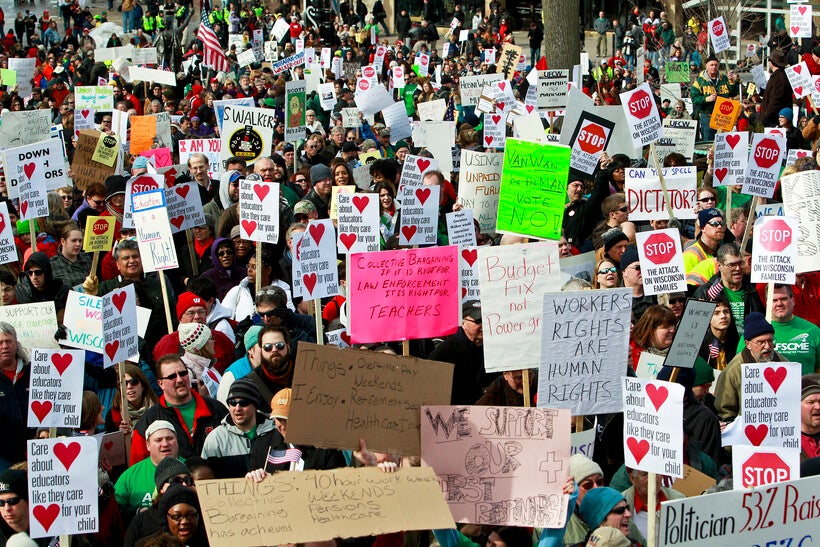 State workers, union members and others protest on the steps of the state Capitol Tuesday, Feb. 15, 2011, in Madison, Wis. The protest was called after Gov. Scott Waker proposed to end collective bargaining for most of the state and local employees. Andy Manis/AP Photo

Four days later, the crowd swelled to thousands, as so many teachers packed the Capitol building that it was hard to move inside.

"Life will probably never go back to normal unless this gets killed," Whitewater math teacher Diana Callope said of Walker's bill in 2011.

The crowd in the Capitol building let out a deafening cheer that day when it learned that Democratic state senators had left Wisconsin to prevent a vote on Walker's bill. Protesters slept on the building's marble floors that night for a round-the-clock occupation. Chants and drumbeats echoed off the walls of the rotunda day and night. For weeks, the eyes of the world were on Wisconsin. 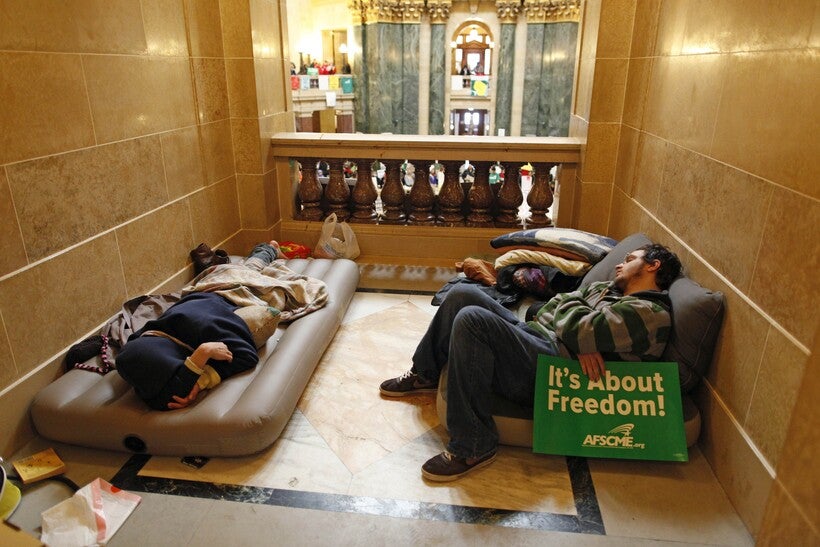 Then eventually, the drama ended. Republicans passed Walker's bill without the help of Democrats. It survived multiple court challenges, and it changed the face of the state where public sector unions were born.

Ten years later, organized labor forges on in Wisconsin, but being part of a union means something different than it used to.

There are fewer union members, they carry less political clout, and those who remain are limited in what they can bargain for.

For many union members who experienced the protests firsthand, they remain a seminal moment, even though the outcome wasn't what they had hoped.

"That was kind of an inspiring thing, just to walk into the Capitol and see massive numbers of people there kind of on my behalf, I found that to be pretty incredible feeling," said Callope in a recent interview reflecting on the 10-year anniversary of Act 10. "At the same time ... I found it to be the first time in my career that I really felt like there were a lot of people who just don't like teachers."

For others, the outcome of the Act 10 fight for unions overshadowed everything else.

"I think those protests, while it was cathartic for us, were largely inconsequential," said Patten, who has since left Wisconsin and now teaches in California.

"We didn't change anything," he said. "We just made a lot of noise."

Before 2011, public sector unions in Wisconsin had the power to collectively bargain over a wide range of issues, like salary, benefits and working conditions.

Now, most public sector unions can only bargain for a raise that's no higher than the consumer price index.

Before they can even negotiate that, they have to jump another hurdle. Just staying organized requires unions to hold annual recertification votes where a majority of all members vote "yes", not just a majority of members who are present. The practical effect is that workers who don't vote are counted as a "no".

A decade ago, public sectors unions would withdraw dues directly from workers' paychecks, and everyone paid. Today, union dues are optional.

Callope, who still teaches in Whitewater, is currently the vice president of her local teachers union. She said her district has had overwhelming success at getting teachers to recertify. But some teachers, even if they support the union, don't pay dues.

"A lot of it's financial," Callope said. "That's the no. 1 reason people tell us they can't do it because they can't afford to have anything else taken out of their paycheck." 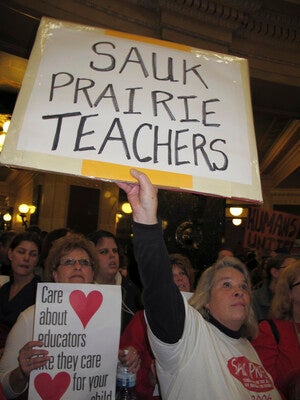 Betty Koehl, 55, a high-school social studies teacher joins other teachers and public employees at the Capitol in Madison, Wis., to protest a bill tstripping most public workers of almost all their collective bargaining rights on Thursday, Feb. 17, 2011. Dinesh Ramde/AP Photo

Callope said there's still a value to her union, even though it doesn't have nearly the same leverage that it once did.

"It's not bargaining," she said. "But it is having the ability to talk with your administrators and your school board and be part of conversations."

But when it comes to salary, Callope said the best way for a teacher to get a raise is to leave and go to a different district where the pay is higher. In some cases, that means leaving Wisconsin altogether.

For Patten, who grew up in Wisconsin and taught in Wausau for several years, moving to California meant his income more than doubled.

"It's partly financial," Patten said of his decision to leave. "But it's also cultural ... The progressive Wisconsin of my youth, I think, is gone."

The experience of teachers varies from district to district, but Patten believed that years of criticizing teachers by some on the right had taken its toll in Wisconsin. After Act 10, he thought many were afraid to rock the boat.

"What I saw is many teachers trying to distance themselves from that 'radical' educator label," Patten said.

Membership in Wisconsin unions has plummeted in the years since Act 10 became law.

According to the Bureau of Labor Statistics, 14.2 percent of Wisconsin workers were union members in 2010 compared to 11.9 percent in the national economy.

But by 2020, just 8.7 percent of Wisconsin workers were members of unions, compared to 10.8 percent nationally.

"This policy really mattered to union density in the state," said Laura Dresser, a labor economist and associate director of the COWS research institute at the University of Wisconsin-Madison.

While other states also saw a decline in union membership over the last decade, Wisconsin's 5.5 percent drop was especially steep compared to its Midwest neighbors.

"In Wisconsin, the bottom falls out," Dresser said. 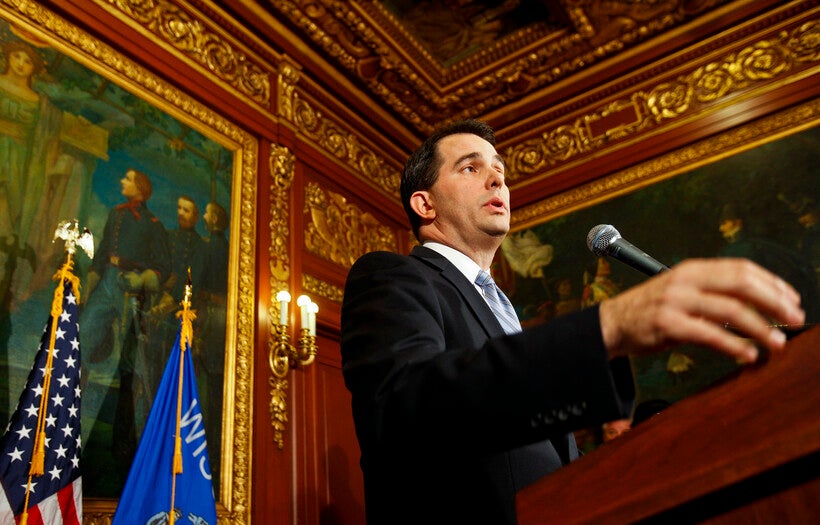 Unions are still active in political campaigns in Wisconsin, but their voice doesn't carry the financial weight it once did.

According to a review by the Wisconsin Democracy Campaign, the total amount unions spent on political campaigns was higher in the decade after Act 10 than it was in the decade before it took effect. But unions' share of overall political spending went down because other donors spent even more.

At the same time, the amount unions spend on lobbying has dropped dramatically.

During the 2009 legislative session before Walker took office, the Wisconsin Education Association Council, the state's largest teachers union, had a total of 17 lobbyists and reported spending about $2.5 million to try to influence state government policies. By 2019, WEAC had just two lobbyists, and its lobbying budget dropped to $71,000.

"I think you can say safely that unions in the Capitol in Madison are not throwing their weight around as much as they used to," said Wisconsin Democracy Campaign executive director Matt Rothschild.

Back To Their Roots

That's not to say unions have given up, but circumstances have definitely forced them to adapt.

The American Federation of State, County and Municipal Employees, whose members were a driving force behind the 2011 protest and the unsuccessful effort to recall Walker a year later, is a different type of union than it was back then.

AFSCME Council 32 Executive Director Patrick Wycoff said AFSCME has not pushed for recertification votes, partly because they're expensive, time-consuming and difficult. Instead, he said AFSCME has advocated for its members on issues like working conditions and workplace safety.

"It's a natural thing for employees to want to join together, to advocate for themselves," Wycoff said. "The boss telling you that you can't do it doesn't change that natural inclination of employees to do it."

Wycoff said today's union advocacy looks different than it did a decade ago. The giant lobby days once organized by AFSCME are long gone.

"Now it's fights right in the workplace," he said. "We're really hearkening back to my dad and my grandpa's union of 40, 50 years ago." 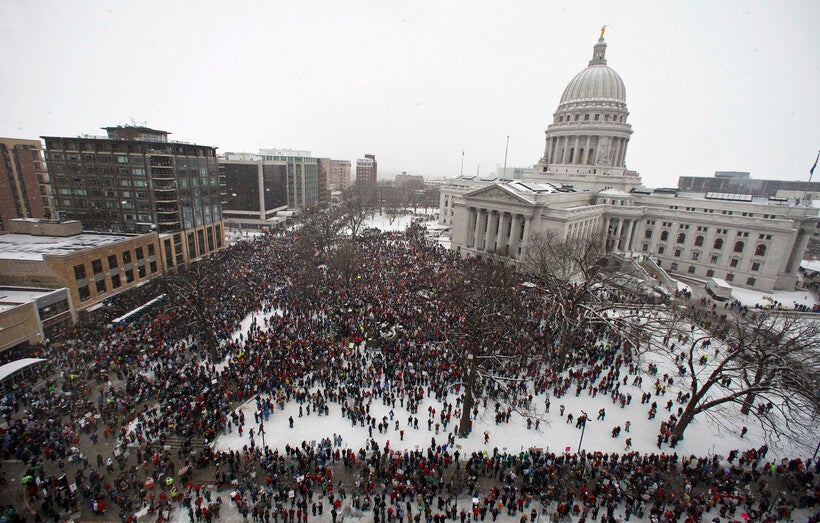 Opponents to the governor's bill to eliminate collective bargaining rights for many state workers protest outside of the state Capitol in Madison, Wis., Saturday, Feb. 26, 2011. Andy Manis/AP Photo

Wycoff said a lot has changed in the last 10 years, including Wisconsin's workforce. He said the majority of his members and potential members weren't employed here in 2011. They don't have that connection to the protests.

"Back then, and I think to a certain extent still today, there was a romantic feel about it that wasn't necessarily true," Wycoff said. "I have a hard time looking back and celebrating something that we lost."

Others focus more on what they see as positives that came from the Act 10 fight.

Bloomingdale said people became more interested in organizing after seeing unions stand up for their members during the protests.

"We were able to mount the largest fight back, really, in the history of Wisconsin over union rights," she said. "There became a renewed determination of working people to demand fairness in our economy."

Regardless of the outcome, she said people remember the fight. People found meaning. Lives were transformed.

"That strength of conviction and that willingness to continue to persevere because of what we believe in is so important," Bloomingdale said. "That is a moment in our collective history that will never be forgotten."