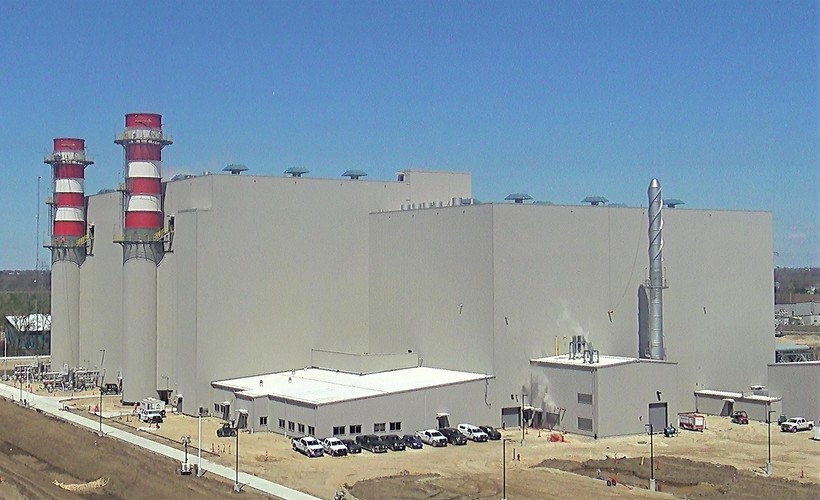 Alliant Energy began building the West Riverside Energy Center in spring 2017 after receiving approval from the Public Service Commission. The $660 million plant can produce enough power for more than half a million homes. Photo courtesy of Alliant Energy

Alliant Energy seeks to sell ownership as part of past settlements with utilities
By Danielle Kaeding
Share:

At the same time, the Public Service Commission, or PSC, voted 2-1 in the interim to approve plans by Madison Gas and Electric to buy a $25 million share in the facility. Utilities say power produced by the plant would help them meet an energy shortfall in their power mix as they retire coal assets and build renewable energy projects.

Wisconsin Power and Light Co., Alliant Energy’s utility in Wisconsin, will sell ownership of 25 megawatts of its West Riverside Energy Center to Madison Gas and Electric. Alliant is also seeking to sell 100 megawatts of capacity to Wisconsin Public Service. Alliant owns most of the 727-megawatt plant.

The transfer of ownership is tied to a 2015 settlement between Alliant, Wisconsin Public Service and We Energies. The deal was reached after We Energies objected to Alliant’s plans to build the West Riverside gas plant. The three reached an agreement that allowed Alliant to move forward with the project while granting Wisconsin Public Service the option to buy an ownership stake of up to 200 megawatts at the Beloit plant.

Under the sale, Alliant’s customers in Wisconsin would face more than $250 million in costs over the next three decades as part of its clean energy transition. PSC Chair Rebecca Cameron Valcq questioned whether Alliant would have offered to sell ownership in the plant if they weren’t obligated under the deal.

"When I look at the numbers — and I look at the fact that it's going to cost its customers more money to do this — I have a hard time believing that they would," Valcq said.

"We look forward to reviewing the Commission’s written interim order and providing additional information," said Tony Palese, an Alliant spokesperson in a statement. "Guided by the plans outlined in our Clean Energy Blueprint, we continue to diversify our generation portfolio and accelerate the development of cleaner, more cost-effective energy resources for our customers."

Alliant’s sale is anticipated to increase costs to its ratepayers in Wisconsin by $258 million over the next 33 years as part of its clean energy transition, which includes costs related to delaying closure of coal plants in Sheboygan and Columbia County. Alliant has said its Clean Energy Blueprint is expected to save customers between $2 billion and $6.5 billion over the next three decades.

Customers would likely face higher costs in the first five years after the sale. Commission staff said the increase is "notable," but the sale also reduces the likelihood that Alliant customers would bear all costs of paying off the facility if it becomes a stranded asset. A stranded asset refers to fossil fuel infrastructure that becomes a liability when it’s no longer used before the end of its expected lifespan.

Huebner, the lone dissenting vote, said the transfer of ownership would yield a loss for customers overall. But Commissioner Ellen Nowak said she didn’t have any issues with the proposal set forth by utilities.

"Based on the information that I have seen in the record, it still falls to me within the public interest for this transaction to occur," Nowak said.

Wisconsin Public Service and Madison Gas and Electric say they’re taking advantage of a cost-effective way to diversify their power mix and meet energy demand as they seek to cut carbon emissions. All three utilities plan to retire their remaining coal plants by 2035 and go carbon-neutral by 2050. Wisconsin Public Service plans to transfer its share of power to We Energies, both of which are owned by WEC Energy Group.

Models examined by commission staff indicate the West Riverside acquisition could result in about $44 million to $135 million in savings for We Energies customers. Staff said the purchase proved to be the least-cost plan in most models except when gas prices were 50 to 200 percent higher.

"We appreciate the thorough discussion today of our plan to purchase 100 megawatts of the West Riverside Energy Center. The commission found that our modeling was robust," said Brendan Conway, a spokesperson for We Energies and WPS, in a statement. "They have asked for additional analysis before making a final decision, we look forward to providing that. We continue to believe the purchase will provide significant value for our customers."

The Citizens Utility Board, a ratepayer advocacy group, had urged the commission in a filing to reject a transfer of ownership to We Energies because of its sensitivity to higher gas prices. The board also argued the transfer of power would lead to a shortfall in capacity for Alliant.

"That's a big share of the Riverside plant, and there is a concern about whether this would create a shortfall that would in turn lead to additional new investments at a time when there are already a lot of cost pressures facing customers," said Tom Content, the board's executive director.

For Madison Gas and Electric, models showed the utility’s electric system would face higher costs without the gas plant. The facility was the least-cost option to meet capacity needs even under unreasonably high natural gas prices, according to commission staff.

"The existing and highly efficient West Riverside facility offers MGE customers safe, reliable and affordable energy, and will help enable our ongoing transition toward greater use of renewable resources as we work toward net-zero carbon electricity," Steve Schultz, an MGE spokesperson, said in a statement.

Madison Gas and Electric is replacing coal-fired units with solar, wind, battery storage and natural gas. Alliant seeks to retire its coal-fired units in Sheboygan and Columbia County and replace them with around 1.1 gigawatts of solar systems. WEC Energy Group plans to retire its interest in the Columbia facility and South Oak Creek coal plant as part of replacing 1.6 gigawatts of fossil fuels in its power mix.

The commission also signed off on the $72.6 million sale of the Whitewater natural gas power plant to We Energies and Wisconsin Public Service. The 236-megawatt facility is currently owned by LSP-Whitewater, and the two utilities currently buy 100 percent of the power produced by the natural gas plant.

"The plant’s ability to provide on-demand power will help keep customers’ lights on, especially when the sun is not shining and the wind is not blowing," Conway said in an email.

The two utilities said the purchase would allow them to maintain a power source that generates half the carbon emissions of coal-fired facilities. The sale is expected to save their customers between $31 million and $57 million.

Editor's note: The Citizens Utility Board and Alliant Energy are underwriters of Wisconsin Public Radio.