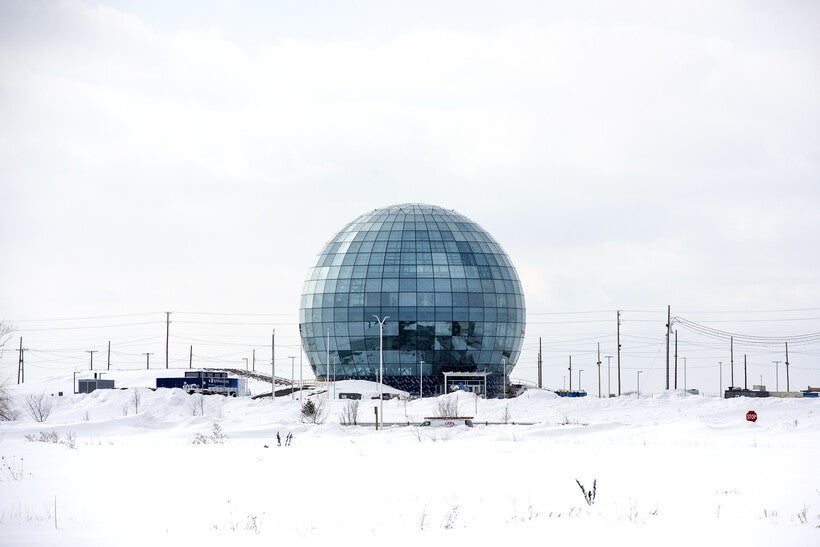 The project director hired to oversee the struggling Foxconn development in the Village of Mount Pleasant is consistently billing taxpayers for 40 hours per week, but records are unable to account for how all his time is being spent.

Claude Lois is a contracted consultant with engineering firm Kapur and Associates, and he works in Mount Pleasant’s Village Hall. His role as project director has no official job description, and records obtained by Wisconsin Public Radio of Lois’ time card and village-owned calendar do not match.

Lois does not provide public updates to the village on how his time is spent or have a direct boss overseeing his work. Village Administrator Maureen Murphy authorizes his $28,000 per month salary without further documentation. When pressed for further information, Murphy provided WPR with Lois' 2017 contract.

Murphy said Lois is in the office early in the morning and "working all the time" on new investment projects for Mount Pleasant. She said despite what Lois’ calendars show, there are no discrepancies between what he is billing for and the time he is working on behalf of the village.

"Every month, Claude presents the progress of the Foxconn development to the public, village and state officials, special interest groups, and stakeholders," according to Kapur's website.

The site says Lois also represents all local and national press inquiries. But the Village of Mount Pleasant contracts with a Milwaukee-based public relations firm to handle its media requests.

As of Dec. 13, Kapur and Associates billed Mount Pleasant approximately $362,000 for 2021, which was largely for Lois' salary. By comparison, Murphy is paid $108,000 annually, according to the village budget.

The next day, Lois had one director meeting on his calendar from 2:30 to 3:30 p.m., with the rest of the day free. His time card said he worked 10 hours that day.

Some days Lois’ calendar is filled with meetings, and he bills up to 13 hours. Other days, like Oct. 28, Lois has nothing on his calendar and bills for eight hours, according to the records obtained by WPR.

In a written statement, Murphy said because of Lois, Mount Pleasant has "acquired and developed thousands of acres of land."

In May, village officials approved $11 million in incentives for Ashley Capital to develop two industrial buildings near Foxconn’s campus.

The village has a development department and the Racine County Economic Development Corp., also paid for with taxpayer funds, is responsible for deals like the Ashley Capital project.

Lois’ salary is paid using money from the special taxing district created to pay for the local portion of the Foxconn project.

When the Village of Mount Pleasant and Racine County created the $911 million tax-increment finance district, officials said the money would pay for land acquisition, infrastructure upgrades and other expenses.

Local governments expect money generated by Foxconn’s projects will eventually cover the costs. But right now, local taxpayers have already spent between $400 million and $500 million on the project. They’re on track to spend $1 billion.

Kelly Gallaher heads the local watchdog group A Better Mount Pleasant. She said the group has been asking questions and filing multiple open records request for years to determine who Lois reports to and how he accounts for his time.

"It appears our worst fears are true," Gallaher said after reviewing Lois’ time sheets and calendars.

"There are no weekly summaries or documentation of any kind which detail exactly what services Mr. Lois is proving for Mount Pleasant each day," Gallaher said. "And the village administrator and board of trustees know it, and they have looked the other way to the tune of $1.2 million so far."

Gallaher said if village officials refuse, the group will take their questions to the Wisconsin Department of Justice.

After serving as the mayor of Burlington in Racine County for four terms and managing the state’s shared revenue program during former Gov. Scott Walker's administration, Lois began working for Kapur and Associates in 2017. He was named project manager for Foxconn without the village conducting a national search.

When Lois was hired by Mount Pleasant, the Foxconn project still had some promise for the village and the state. But since 2017, Foxconn has fallen short on its hiring and building goals.

In October, the company announced it had struck a $280 million deal to purchase electric automaker Lordstown Motors Corp.’s plant in Ohio. It is unclear what Foxconn’s plans for Wisconsin are.

"He works seven days a week and may be one of the busiest people in Wisconsin," the Kapur website states. "Claude’s reputation continues to grow as he leverages his experience managing local politics, state revenue, and major projects to assist communities like Mt. Pleasant, and now Saukville, to ensure the successful completion of projects."

Despite billing Mount Pleasant 40 hours nearly every week since he started, Lois was hired by Saukville in 2020.