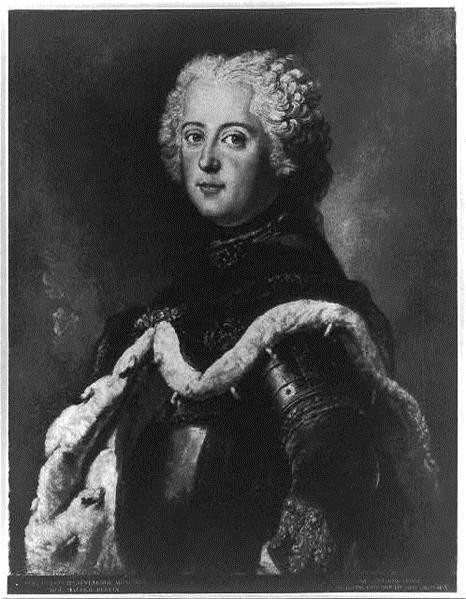 King Frederick the Great of Prussia was one of the great patrons of music, but in his early years he suffered for his art–and so did others.

His father, Friedrich the First, was so steeped in military matters that he tried to squelch young Frederick’s fondness for the fine arts. The prince was supervised constantly, and when he dared to stray from his father’s prescribed routine, the punishment was both verbal and physical.

Despite the dangers, and with the help of his mother and sister, Frederick read forbidden books and played flute duets with a servant.  In 1730, at the age of eighteen, Frederick tried to escape to England, but was caught and imprisoned; and in his presence one of his alleged accomplices was beheaded. From then on, Frederick took his military studies seriously, but continued to nurture his interest in music.

In 1740, when his father died, the new king, soon to be known as Frederick the Great, wasted no time in expanding Prussia culturally as well as geographically.  He composed flute sonatas and concertos by writing out the melody and the bass line and leaving the details to others.  By all accounts, his abilities as a flutist were far above average. He wrote 122 flute sonatas, four flute concertos, and four symphonies, which–like his army and his government–were efficient and regimented.

He brought some of the best composers and performers of the day into his court and paid them royally. His boyhood flute teacher, Johann Joachim Quantz, came from a position in Dresden–at eight times the salary.  One singer received higher pay than that of a cabinet minister. And while Frederick’s musical tastes became increasingly conservative and restrictive, he made a lasting contribution to music by supporting some of its best practitioners.