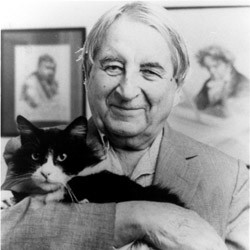 At the age of twenty-five, Nicholas Slonimsky found out that playing the piano could save his life.

As the Russian Revolution became increasingly deadly, he became determined to emigrate to Paris. The only way to Europe was through British-occupied Constantinople, and, on the boat from Yalta, he was heartened to hear his fellow passengers say that “the outside world” had a big demand for musicians to perform in restaurants and movie theaters.

But not all of the arts were in such high demand.

When they arrived in Turkey, an interviewer questioned each refugee about his or her skills. The selection system was simple. An order to proceed to the right meant acceptance. Being sent to the left meant rejection and deportation to Russia.

Then it was Slonimsky’s turn. He declared his profession. The interrogator asked if he could read music, and Slonimsky declared with rising pride that he could, even difficult music. He was about to quote composer Alexander Glazunov, who had said that his playing was full of elegance and taste.

But the official cut him off and told him to go to the right.

A few more musicians and people with manual skills joined him there, but most were sent to the left.

“The scene suggested the Last Judgment,” Slonimsky recalled, “with the sheep led to the right and the goats to the left. I was a sheep and qualified to enter Heaven.”

Within a few years, Slonimsky headed for the United States, where he became a leading proponent of contemporary music and the editor of a major music encyclopedia, a job that he held until four years before his death at the age of a hundred and one.