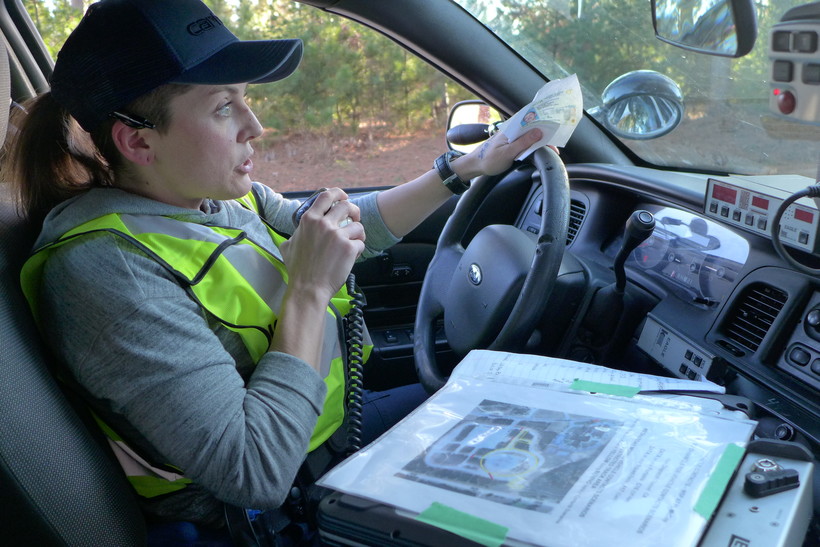 Recruit Stephanie Nelson uses the radio in a squad car at the Wisconsin State Patrol Training Academy at Fort McCoy.

At the Wisconsin State Patrol Academy at Fort McCoy, Madison Police Department recruit Stephanie Nelson sits in a squad car. She's about to drive through a maze of cones, performing an advanced evasive maneuver. She radios her supervisor, gets permission to go and starts to accelerate.

As she approaches 30 mph, an arrow tells her which way to turn. She jerks the wheel left, then right. The tires squeal, and so does she. But she makes it through without hitting any cones.

Driving is something police do every day. It's also one of the most dangerous things they do. According to the Officer Down Memorial Page, a handful of officers are killed each year in vehicle pursuits. In this course, the recruits learn the mechanics of emergency driving, like how to quickly and safely make sharp turns. But for Nelson, the toughest lesson is getting out of her own head.

"You need to stay calm," she said. "And if you listen to that voice in your head that's telling you you're doing everything wrong, then you're going to continue to do things wrong. So if you make a mistake, learn from it and move on."

MPD Sgt. Daryl Doberstein, emergency vehicle operations trainer, agreed. They intentionally build up stress during training, he said, so recruits will be able to perform if they are ever in a stressful driving situation such as a high-speed pursuit.

"In stressful situations, if they can remain a little calmer, we try to run them through repetitions on that," he said. "The more calm they can remain, you know, the better they'll perform when reality is in front of them."

MPD adopted a new pursuit policy in October. It's stricter than the old policy and requires the danger of a pursuit itself to be considered before and during the chase. If the pursuit becomes too dangerous, it must be terminated. Doberstein was on the committee that made the changes.

"One of the things we looked at was how many pursuits were we pursuing people that the dangerousness of their crime exceeded the dangerousness of being in a high-speed pursuit," he said. "Because any time you're moving cars around a city-type environment at high speeds, that's dangerous."

In the last five years, MPD has been involved in just more than 100 pursuits, but Doberstein said he thinks that will change.

"We will be in less pursuits that, quite frankly, we didn't need to be in in the first place," he said. "We will probably hone our tactics and be smarter about how to apprehend people versus racing around with multiple ton weight worth of vehicles."

At Fort McCoy, the recruits also practiced traffic stops. In practice scenarios, training officers drove cars around the track. The recruits had to spot violations, pull the cars over and write tickets.

Nelson pulled Sgt. Tim Patton over for rolling through a stop sign, only to discover the license he gave her was not valid. She considered calling a supervisor or letting a licensed passenger drive. Patton said it's important the recruits get the opportunity to work through problems like this on their own.

"She probably doesn't know all the ways this could play out," Patton said. "So she's just trying to work through the problem."

Officer Bob Veatch, the vehicle contacts trainer for the Madison Police Department Training Academy, said the skills the recruits learn here will be some of their most-used skills once they hit the streets.

"Every day they're going to be driving a squad car," he said. "Many days they're going to have to drive in an emergency mode to get to a call where someone is asking for help. A lot of what we do are traffic stops."

Veatch said even though traffic stops are fairly routine for officers, they still present some danger.

Overall the top priority, he said, is safety.