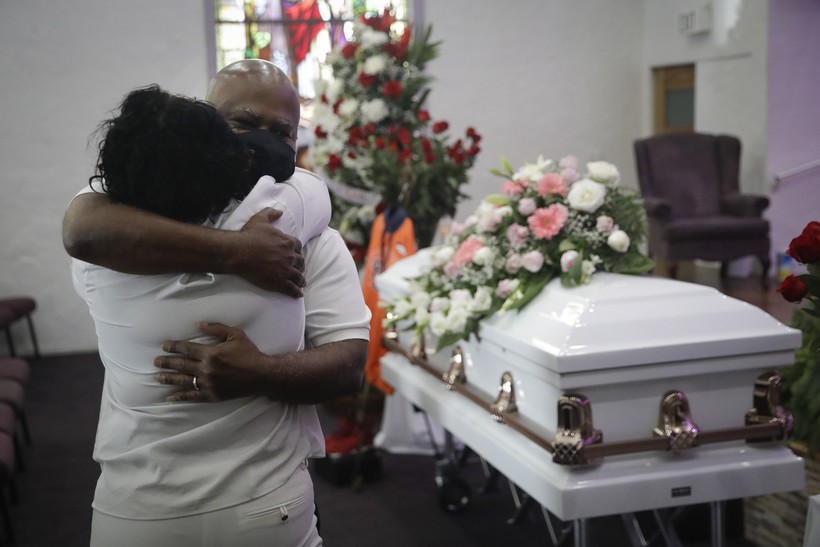 In this July 21, 2020, file photo, Darryl Hutchinson, facing camera, is hugged by a relative during a funeral service for Lydia Nunez, who was Hutchinson's cousin at the Metropolitan Baptist Church in Los Angeles. Nunez died from COVID-19. The U.S. death toll from the coronavirus topped 300,000 Monday, Dec. 14, just as the country began dispensing COVID-19 shots in a monumental campaign to conquer the outbreak. Marcio Jose Sanchez, AP File Photo

Psychologist: Convey Seriousness Of Events Through Stories, Not Numbers

Gravity Of 300K Dead Because Of Pandemic Is Hard For People To Fully Comprehend
By Elizabeth Dohms-Harter
Share:

On Dec. 14, the number of deaths in the United States from COVID-19 surpassed 300,000. That's the size of the entire city of Pittsburgh. It's more than 100 times the number of people killed in Pearl Harbor.

But people aren't equipped to grasp how big that number really is, said Ellen Peters, a decision psychologist and the Philip H. Knight chair and director of the Center for Science Communication Research at the University of Oregon.

In an interview with Rob Ferrett on WPR's "Central Time," Peters explained that the gravity of the pandemic can be especially hard to comprehend, despite the evidence, because the disease feels abstract to a lot of people. Some people don't know anyone who has COVID-19, or at the very least, a serious case of it. It can spread like wildfire, but symptoms might not show up for days.

"As a result, what you're responding to is just the possibly of getting sick," Peters said. "Not that there's someone in front of you coughing, but that someone around you might be infected, and they might be a superspreader and you could get it."

But there are things that people do respond to that can help elucidate the seriousness of these sorts of events, she said.

Rob Ferrett: How do we convey these massive numbers that have these stories behind them?

Ellen Peters: It's actually a really tough thing to do because our brains are not wired to make sense of these kinds of big numbers. There are two different ways that we understand numbers. One is with our thinking minds, and these big numbers overwhelm our thinking minds. We tend to be innumerate with these numbers. But they're also beyond the capacity of our intuitive minds.

When you're communicating numbers, there are a variety of things that you can do. You can do those comparisons, for example that the number dead is about the same as the population of Pittsburgh. You can also show graphics or other visual depictions, trying to help people get a sense of how large that number is when it's beyond them.

You can also try to put the tears back on the statistics by sharing some of the impactful stories.

EP: Communicators, whether it's the incoming Biden administration or communicators in your own city, need to be sending out messages to people from trusted sources because communications that come from people we trust are more persuasive. People are more likely to do what's asked or recommended when the message comes from someone they trust.

There are other things we need to do, too. We have to figure out how to establish and maintain social norms about following guidelines. We want the grand bulk of people getting vaccinated, wearing masks and socially distancing, and then we want to communicate that those social norms actually exist because they can guide and direct behaviors people conform to.

Another thing is to focus on what people value. Oftentimes what we value is not just doing stuff for ourselves, but doing stuff for other people. I've told people many times that I wear a mask because I don't want to accidentally infect somebody who's in a really vulnerable population.

RF: We've heard from those critical care workers, emergency room workers and others. How powerful can that be in communicating the seriousness of a situation like this?

EP: Those kinds of concrete, vivid, easy-to-imagine experiences — they convey in ways that little else can.

Numbers can't convey it. Numbers are so abstract. Just hearing 300,000 people died or 290,000 people died, it's like it doesn't even get past the filters in our brain to say that it's important.

RF: How do we balance between informing people and over-scaring them?

For example, you feel fear when you walk down a dark alley, and those kinds of gut feelings are usually helpful. They sort of act as a GPS for us to help us figure out which way to go.

But those gut feelings aren't always helpful. They can sometimes overwhelm us into panic. It can also mess with the filters we normally have for what's real news and what's fake news.

But we've been on a global lockdown since mid-March basically, and we're not equipped to feel worse and worse and worse every day. Instead, what we tend to do is adapt and numb ourselves to these kinds of ongoing stressors. And it's just so that we can be functional and go on with our lives.

But people are really adaptive. 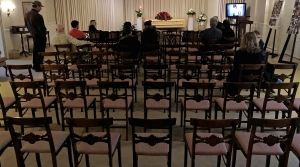 We talk with a decision psychologist about why humans aren't mentally equipped to process the amount of deaths we've seen during the pandemic and how communication about those lost lives could be more effective.