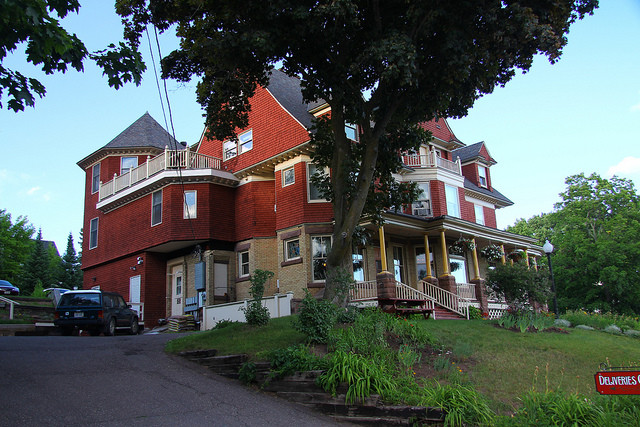 A hotel in the city of Bayfield. The city's mayor says a change in room tax policy would result in services being cut.

Proposed Changes To Room Taxes Raise Concerns Among Some Communities

Change Would Mean Cities, Towns Would Only Be Able To Keep Up To 30 Percent Of Taxes Collected
By Danielle Kaeding
Share:

While supporters of a budget plan to change room tax policy say the measure would benefit tourism in the state, opponents of the move, including some Wisconsin communities, say it will hurt the visitor experience.

The change, which was approved by the Joint Finance Committee last month, would mean communities would have to turn over 70 percent of room taxes they collect to local tourism. Bayfield Mayor Larry MacDonald said his city keeps 48 percent of the tax now, and that the proposed change would result in services getting cut.

"We will be forced by the Wisconsin Hotel and Lodging Association to damage our tourism economy because we will not have as many police officers, garbage cans, parks — you name it," said MacDonald.

Cities like Bayfield that retain more than 30 percent of local room tax revenues were grandfathered in when the state changed the law in 1994. The change set the maximum tax rate at 8 percent, but only those that raised their rates were subject to turn over 70 percent of revenues for tourism promotion and development.

Under the JFC-approved motion, municipalities that receive more than 30 percent will have to reduce what they can keep over a five-year period. They can take what was collected in 2013 revenues beginning next year. By 2020, they could take whichever is greater — the 30 percent share or what they collected in 2009.

MacDonald said the phase-in would not help the city absorb the change.

"Well, 2009 was in the middle of that whole wretched crunch in the economy so that’s an even worse figure to use," he said. "They’re not doing us any favors."

"If the city was unable to invest in some infrastructure, the chamber would probably step up and do the best we can to replace that money," said Eades.

Eades said that as goes Bayfield, so goes the success of tourism there. He said the change pits tourism officials against cities, creating unnecessary tension between the two.

Denise Pieroni is the city administrator for Delavan. She said the city currently uses 82.5 percent of room taxes collected for capital projects that improve city infrastructure. Delavan would likely increase borrowing to pay for improvements to maintain their tourist town. With the change, Pieroni said there would be no incentive to add beds because of the cost it would take to service them. She said it’s short-sighted to use all the revenues for tourism promotion.

"(Visitors are) not going to come again if you have a downtown and it’s deteriorating," she said.

Wisconsin Hotel and Lodging Association President and CEO Trisha Pugal, however, said the room tax was always intended to benefit tourism: "That’s the only reason an industry like the lodging industry would accept a tax just on their customers," she said.

She added that the change will increase transparency by requiring cities to report to the Department of Revenue how they’re spending taxes.

“We know of 18 municipalities that currently keep 100 percent of room tax revenues,” she said.

Pugal said that around 60 out of 270 communities that use the tax currently keep more than the 30 percent share that would be required under the change. She said the phase-in provides enough flexibility for communities that would have to turn over additional dollars to tourism entities. She said the shift will benefit local tourism by funding promotion and development, bringing the state more sales tax dollars.

Editor's Note: This story has been updated with more context and information.