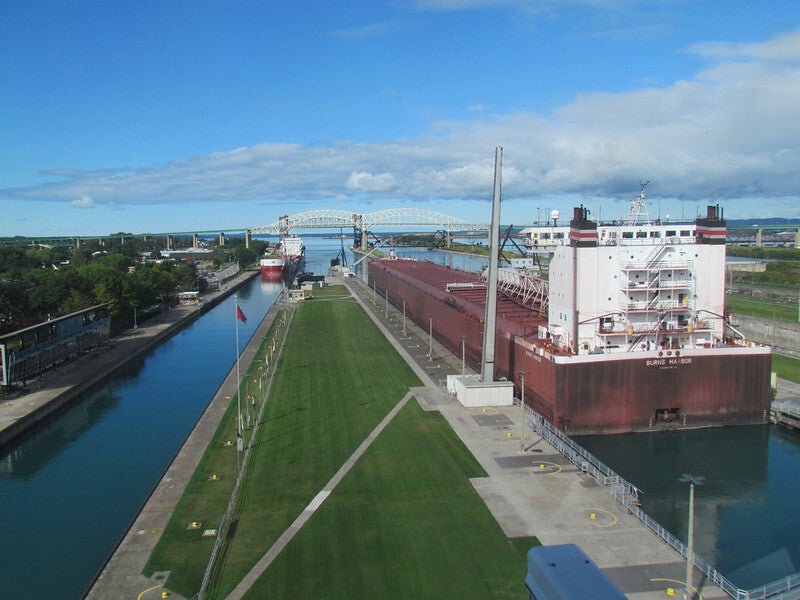 The Burns Harbor is in the Poe Lock and the Richelieu is preparing to enter the MacArthur Lock on Sept. 16, 2011.
Photo courtesy of the U.S. Army Corps of Engineers

Major projects benefiting the Great Lakes region will receive a large infusion of funding as part of $14 billion awarded through the Biden administration's bipartisan infrastructure law and other sources, the White House announced on Wednesday.

The U.S. Army Corps of Engineers will be able to finish a long-awaited new lock to handle the largest vessels moving between Lake Superior and the lower Great Lakes as part of nearly $479 million awarded through the bipartisan infrastructure law.

The infrastructure funding will also provide a $226 million boost to a project that seeks to keep the invasive Asian carp out of the Great Lakes.

At Sault Ste. Marie, Michigan, the Army Corps has been working to complete a $1.5 billion project at the Soo Locks. The new 1,200-foot-long lock will provide another option to the aging Poe lock, which was the last lock built on the system and opened in 1969. That lock is the only one that can handle 1,000-foot ships that haul iron ore and other cargo from the Port of Duluth-Superior to the lower lakes.

"All of the cargo and associated commerce that moves through the Port of Duluth-Superior has to move through the Soo Locks on the way to the lower lakes, and on the way back up from the lower lakes. So, their functionality and resilience is really critical to our port," said Deb DeLuca, executive director of the Duluth Seaway Port Authority.

Around 35 million tons of cargo moves through the Twin Ports each year, and iron ore makes up more than half of the shipments headed for the lower lakes. The Army Corps found nearly all domestic steel used in manufacturing for automobiles and other products is made from iron ore that moves through the Poe Lock.

"The Soo Locks are nationally critical infrastructure, and their reliability is essential to U.S. manufacturing and National Security," said Detroit District Deputy District Engineer Kevin McDaniels in a statement. "A failure of the Poe Lock would have significant impacts to the U.S. economy, especially the steel industry."

A 2015 report from the U.S. Department of Homeland Security said failure of the lock for six months could put 11 million people out of work.

Congress first authorized funding for a new Poe-sized lock in 1986 and reauthorized funding in 2018. The Army Corps plans to award a construction contract this spring and begin work on the new lock chamber this summer.

Michigan lawmakers said the funding awarded this week will pay for the remainder of the project’s cost, but the Corps’ project manager Mollie Mahoney said the agency won’t know that until the contract is awarded.

The project is facing hurdles with anticipated labor shortages and the rising cost of materials due to the COVID-19 pandemic. Mahoney said they’re also expecting more competition for resources as many infrastructure projects get underway due to funding from the bipartisan infrastructure law.

The Corps estimates construction will be finished by 2030, creating more than 1,200 jobs each year.

The Soo Locks handle on average between 70 to 80 million tons of cargo each year. They support more than 123,000 jobs in the United States and Canada and $22.6 billion in economic activity, according to a 2018 report from Pennsylvania consulting firm Martin Associates. 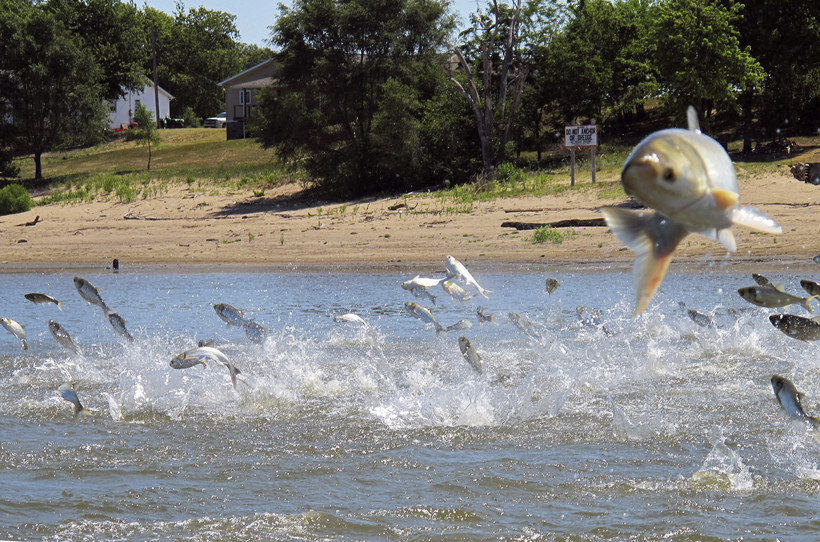 In this June 13, 2012, file photo, Asian carp, jolted by an electric current from a research boat, jump from the Illinois River near Havana, Ill. A fishing method originally developed in China will be used to remove invasive Asian carp from Kentucky Lake and Lake Barkley. The "unified method" of fishing drives carp through a series of large nets into a containment area, where they can be harvested. The method has been successful at capturing large quantities of Asian carp in Missouri and Illinois. John Flesher/AP File photo

The Army Corps also received $226 million for initial engineering, design and construction of a project to install measures like noisemakers, bubble curtains and electric barriers at the Brandon Road Lock and Dam near Joliet, Illinois. The site is considered a crucial choke point to prevent Asian carp from making their way into Lake Michigan.

Molly Flanagan, chief operating officer with the Alliance for the Great Lakes, said the funding is a historic step forward.

"It's going to allow us to seamlessly move from design to construction, which puts us in a much better place to stop carp from getting into the Great Lakes," said Flanagan.

Signs of the fish have been found miles from Lake Michigan and also within the Milwaukee River last summer.

Asian carp are voracious eaters that can consume up to 40 percent of their body weight in food each day, which could gobble up food for native species like walleye and lake whitefish. Silver carp, bighead carp and black carp threaten the Great Lakes' $7 billion fishing industry and $16 billion recreational boating industry.

A study published in 2020 by researchers found that climate change may make it easier for Asian carp to grow and thrive in Lake Michigan if the invasive species finds its way into the Great Lakes. The research built on an earlier study that found Asian carp could become more widely established in the lake.

The cost of the project will be split between the Army Corps and the state of Illinois. The two signed an agreement in late 2020 to complete the initial phase of the Brandon Road project.

Andrew Leichty, the Corps’ project manager, said they would need to sign another agreement with Illinois to release the newly awarded funding. The state would be required to put up $45 million as part of its share for the first phase of the work. Great Lakes governors have pledged to support Illinois, but so far only Michigan has pledged $8 million to the project.

In December, Great Lakes governors, including Gov. Tony Evers, signed a letter to congressional representatives that urged them to fully fund the project.

"(T)he balance of project cost for design, construction, operation and maintenance is beyond the capacity of the Great Lakes States to match," the governors wrote.

The Army Corps estimates the project will cost around $858 million overall. The agency plans to award a construction contract by 2024 and complete the entire project within six to eight years.

Other Wisconsin projects that would be funded under the Army Corps’ construction work plan: