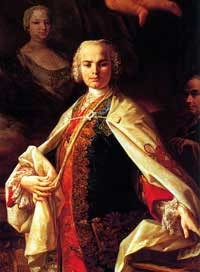 “The only Italians here that merit attention are two musicians.” So wrote the French Ambassador to Spain in 1746. He went on to say that one of the two was harpsichordist Domenico Scarlatti and the other was a singer named Farinelli.

Farinelli had been born Carlo Broschi in Naples in 1705. When he was a boy, an errant blow from a horse’s hoof had caused him to be castrated for medical reasons. In a time when the voices of castrati were considered especially beautiful, young Carlo appropriated the name of a prosperous Italian family and took to the stage.

He was a celebrity of the London opera stage in 1737 when he received a summons from the Italian-born Queen of Spain to come to Madrid to lift King Philip V out of a long debilitating depression. What began as nightly serenades in the room adjoining the King’s apartment developed into a Spanish sojourn that lasted more than twenty years.

In 1746, when Ferdinand and his wife, Maria Barbara of Portugal, became King and Queen, Farinelli became such a royal favorite that he was said to have the influence of a prime minister. Many foreign ministers and King Louis XV of France offered him bribes, all of which he turned down. The Queen Mother echoed the sentiments of many Spaniards when she grumbled that the country had been taken over by Portuguese and musicians.

Despite his ascent, Farinelli not only remained Scarlatti’s friend, but also helped him out when he ran into financial difficulties. English music historian Charles Burney, who was a generation younger than Farinelli, suggested that the singer was so gracious to those above and below him in rank at court that he was almost incapable of arousing jealousy.

If he had ambition, it lay in the realm of music. Under the new monarch, Farinelli took over the direction of all court operas, and the productions were so lavish that they merit a story in their own right. We’ll hear it in November.