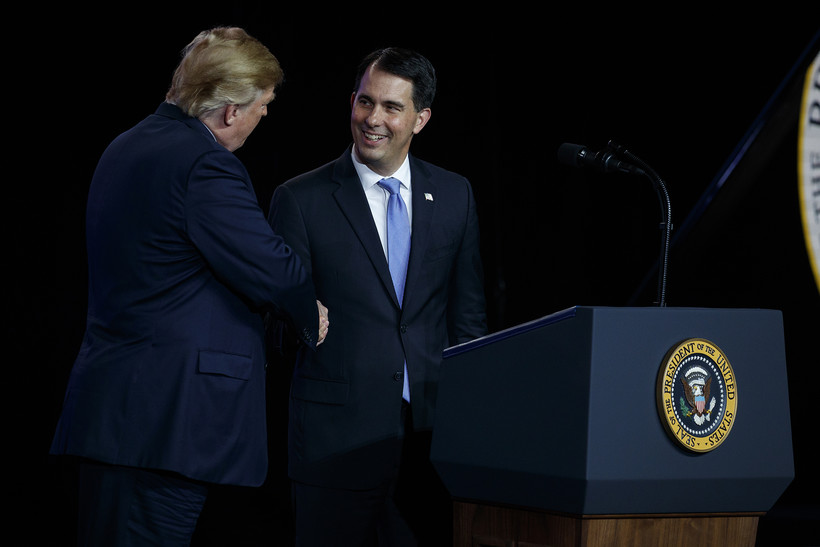 President Donald Trump is expected to touch down Wednesday at Central Wisconsin Airport in Mosinee where he will campaign for Wisconsin Republicans, including Gov. Scott Walker, U.S. Senate candidate Leah Vukmir and U.S Rep. Sean Duffy.

At a campaign stop Tuesday in the Green Bay suburb of Ashwaubenon, Walker said he planned to thank the president for instituting trade tariffs on dairy products.

"I'm going to thank him tomorrow in particular for the fact that you look at the dairy industry, probably now more than ever before, it needs help," Walker said. "I pleaded with the president to take action against Canada because what they were doing to Wisconsin dairy farmers, unlike just about any other politician I've ever heard of in Washington, a year-and-a-half later Donald Trump delivered on that promise."

Whether Walker will meet the president on the tarmac is unclear, but Walker said even the president's presence in the state is a good thing for building excitement for the upcoming election.

Former president Barack Obama is also set to make a campaign stop in Wisconsin on behalf of U.S. Sen. Tammy Baldwin. He will be in Milwaukee on Friday.

"In the end, regardless of whether President Trump or President Obama is here, in the end, the people of the state are going to be casting a vote between now and Nov. 6 about who should be the leader of the state of Wisconsin for the next four years," Walker said.

Walker appeared in Ashwaubenon to accept an endorsement from the National Federation of Independent Business.

He has previously said if he is re-elected to a third term it will be his last.