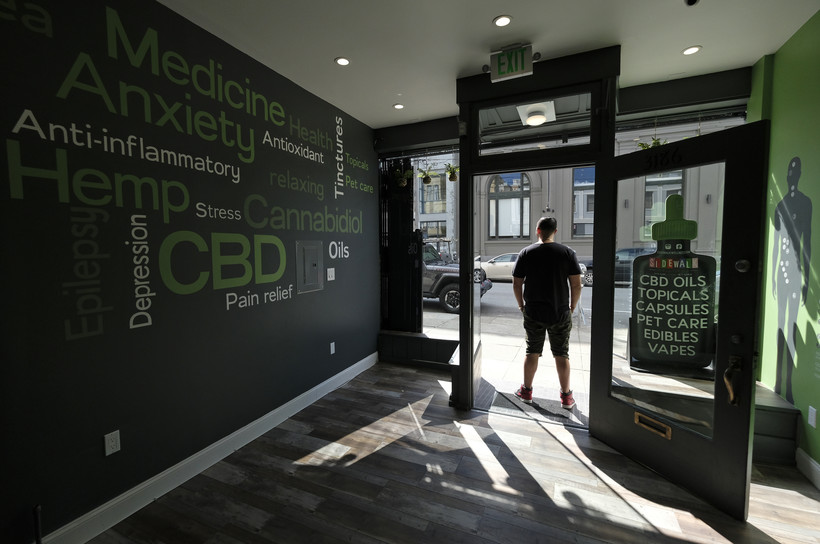 In this photo taken Thursday, March 21, 2019, Gus Dabais stands in the entry to his Sidewalk Wellness store in San Francisco. Eric Risberg/AP Photo

Wisconsin Republicans have been slow to embrace medical marijuana. It’s illegal and is likely to remain so in the near future. However, lawmakers haven't been so resistant to hemp. It’s the non-THC containing cousin of marijuana so it doesn't have the psychoactive properties that make people feel high.

In 2014 former Gov. Scott Walker made hemp-derived cannabidiol oil, or CBD, legal with a doctor's order, after lawmakers were unable to resist the pleas of parents who said CBD helped control seizures in children with a rare form of epilepsy. Under the 2018 Farm Bill, CBD was legalized under federal law.

But now at least one lawmaker is wondering if they cracked open a door they can't shut.

"I think today it has gone way too far. But we passed the law," said Rep. John Spiros, R-Marshfield, during a November public hearing on a state proposal designed to reduce e-cigarette use among teens by raising the age to buy such products.

"I didn’t think we’d have CBD being available in a store that rents out videos. When we passed (a bill known as Lydia's Law) it was specifically to help those who had seizures. It wasn’t supposed to go beyond that," Spiros lamented as school and health officials expressed concerns about e-cigarettes. 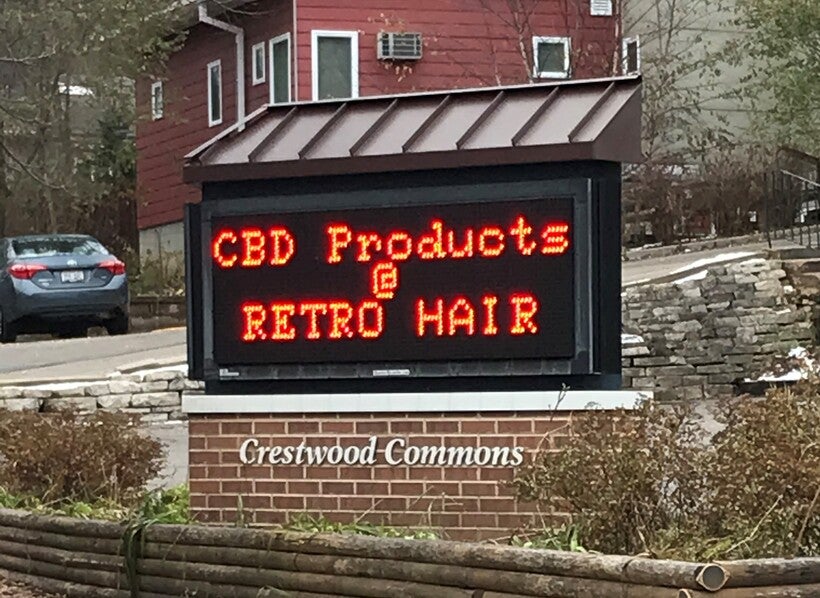 Cannabidiol oil, or CBD, was made legal in Wisconsin in 2014 for limited purposes. A subsequent state law and federal farm bill legalized hemp, from which CBD oil is derived. It's now available at gas stations, video stores and hair salons like this one on Madison's near west side. Shamane Mills/WPR

While most e-cigarettes contain nicotine and many are flavored, some also contain CBD oil or THC. Federal health officials suspect tainted e-cigarettes and vaping devices bought on the black market may be linked to an outbreak of lung damage that has sickened more than 2,500 and killed 54 people.

Still, the popularity of CBD products has continued to rise. It’s in everything from lotion to beer.

A researcher who has studied the anti-inflammatory effects of CBD is hopeful the substance has healing properties. But she’s wary expectations may be too high. 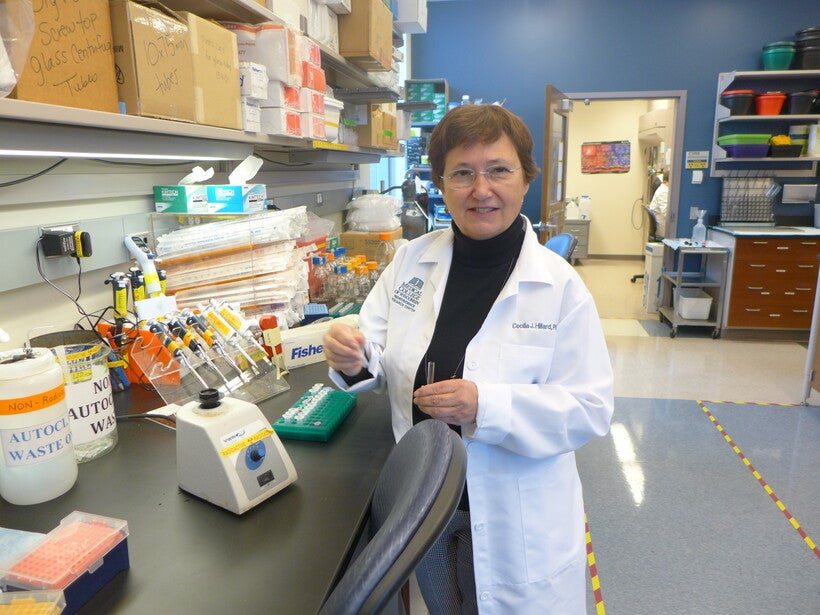 Shown in her lab at the Medical College of Wisconsin in this Nov. 2019 photo, pharmacology professor Cecilia Hillard explains how cannabidiol may be good for inflammation. But she is concerned that too many health claims are untested as CBD products grow in popularity. Shamane MIlls/WPR

"It clearly reduces the body’s response to inflammation. I think this is one of the more promising effects of CBD. We’ve also been studying it for other things that haven’t shown much effect," said Cecilia Hillard, professor of pharmacology and toxicology at the Medical College of Wisconsin.

Hillard is concerned about all the hype over unapproved CBD products. But retailers see an opportunity because consumer demand is high for an ever-growing list of ailments.

"I’m all for it. CBD has been a life changer not only for me but for a lot of other people I know," said Ryan Barnes.

Barnes used to take prescription medication to control anxiety while trying to juggle studies and work at the same time as a college student. Now he uses CBD drops to relax.

"The stress is real," he said.

The effectiveness of CBD depends on the condition people are trying to alleviate. A study from Germany suggests that CBD may be a good treatment for schizophrenia, Hillard said. And research in New York indicates it might help prevent cravings in heroin addicts.

But as for other uses?

"It's hard to really recommend it. We have not been able to do placebo-controlled studies in human beings. So, you get concerned there’s a lot of expectation particularly for sleep or anxiety where the endpoint can be quite subjective," Hillard said.

She's concerned CBD oil is being used in ways that may not help, or could even hurt, people. For example, she notes it being used by parents to treat ADHD and autism in children. Pregnant women are also taking it to treat nausea and pain.

The U.S. Food and Drug Administration has advised against using cannabis and CBD while pregnant.

The agency has also issued warning letters to companies making claims about CBD which the government says aren’t substantiated.

"Consumers should know that CBD products that are on the market today have not received FDA review or approval," said Patricia Kelmar, director of Health Policy for the National Consumers League.

The group says sales of unregulated products are soaring and more needs to be done to ensure people and pets are safe.

The Green Barn Door is a CBD store near the University of Wisconsin-Madison campus which expects some customers will be shopping not only for themselves, but for their dogs.

"We got drops, we got pet treats, sprays you can put on their food," said Barnes, who oversees sales for the Green Barn Door.

Like other retailers selling CBD, he hopes sales will continue to grow. 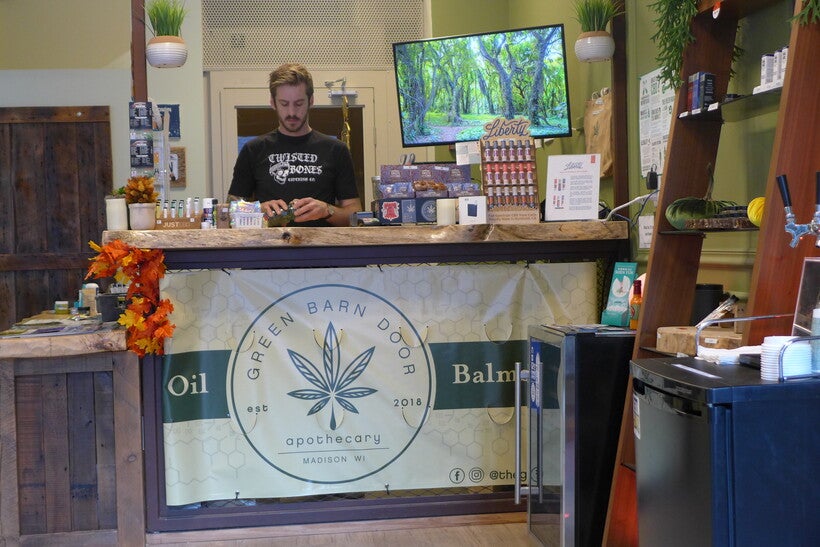 Last year, the FDA approved a CBD extract called Epidiolex after three randomized, double-blind and placebo-controlled clinical trials showed the drug, taken along with other medications, helped to reduce seizures.

As over-the-counter purchases of CBD rise, researchers like Hillard would like to see more regulation and testing. Without it, she says, the true potential of CBD may never be realized. But getting FDA approval is very expensive.

"What kind of company is going to do placebo controlled trials if they aren’t going to have a profit to make at the end? Consumers can just buy it from a gas station or other retailers," she noted.