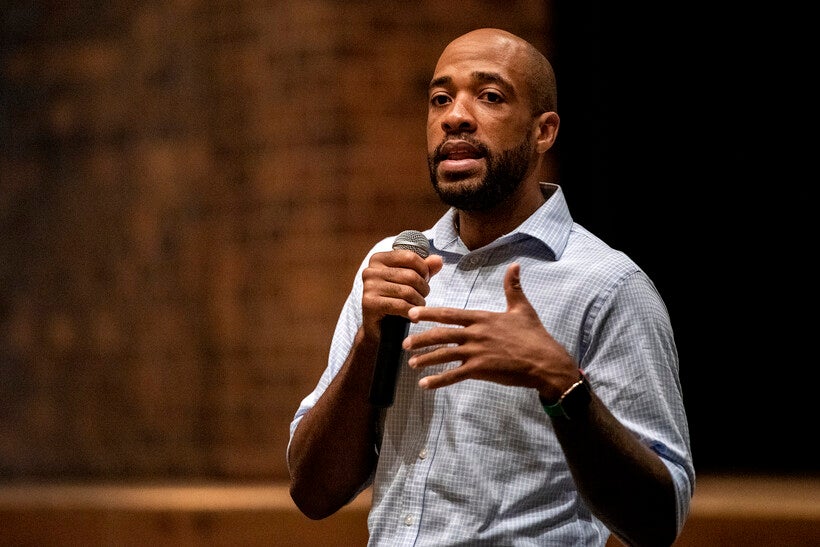 The survey results released Wednesday offer the first glimpse since the Aug. 9 primary election of where matchups stand in the state's two highest-profile races.

In the U.S. Senate race, a once-crowded field was cleared by Barnes just more than a week before the August primary, when voters tapped him as the Democratic nominee to take on Johnson. Wednesday's poll found that 51 percent of those planning to vote in the November general election support Barnes while 44 percent said they plan to vote for Johnson.

Barnes' lead has grown slightly from a June survey by the law school that asked who voters would pick in a theoretical head-to-head matchup. Of all the prior Democrats in the primary race, Barnes had the highest lead, with 46 percent saying they'd pick the lieutenant governor, while 43 percent picked Johnson. Still, Barnes' lead in June was within the poll's 4.3 percent margin of error.

When broken down by party, the August poll showed Barnes leading by a significant margin with independent voters with 52 percent saying they'd vote for the lieutenant governor and 38 percent choosing Johnson.

A statement from Barnes' campaign called his 14-point lead among independents "staggering."

"Mandela has been able to grow his lead over Johnson from the primary to the general election," said the statement. "As Wisconsinites begin to engage with the upcoming midterms, it’s clear that voters are swinging Mandela’s way."

The poll found Johnson's favorability ratings barely changed from June, with 38 percent of voters this month saying they held a favorable view of the senator and 47percent saying they have an unfavorable opinion of him.

In June, 37 percent of respondent voters held a favorable view of Johnson and 46 percent had an unfavorable view.

Evers has narrow lead over Michels, within margin of error

In the race for Wisconsin governor, Evers led Michels, a former U.S. Senate candidate, by just 2 percentage points, well within the August poll's margin of error. Overall, 45 percent of respondents who plan to vote in November said they'd choose Evers while 43 percent planned to vote Michels.

"Tony Evers is in trouble," said a statement from Michels' campaign. "Tim Michels was at zero percent in the polls in April and has been underestimated ever since. But we're building the campaign that grows every day."

Michels defeated former Lt. Gov. Rebecca Kleefisch in the Aug. 9 Republican primary by just more than 5 percentage points, according to unofficial results. Michels received 47.2 percent of the vote, while Kleefisch got 42 percent.

Evers' job approval rating was nearly unchanged from June to August, according to the poll. This month, 47 percent of voters said they approved of the first-term Democrat's job performance while 45 percent said they disapproved.

In June, 48 percent of those surveyed approved of Evers' job performance while 45 percent disapproved.

For much of 2022, inflation topped the list of concerns among voters. The August survey found 67 percent were very concerned about rising costs while just 4 percent said they were not too concerned.

Gun violence was second among the list of voter concerns, with 61 percent of respondents saying they're very concerned about it and 6 percent saying they're not too concerned.

That marks a 2 point decline from the law school's June survey that found 58 percent of voters were very concerned about abortion policy. The June poll was conducted just before the U.S. Supreme Court overturned Roe v. Wade abortion protections.

The August Marquette poll surveyed 811 registered voters and had a margin of error of plus or minus 4.2 percent.