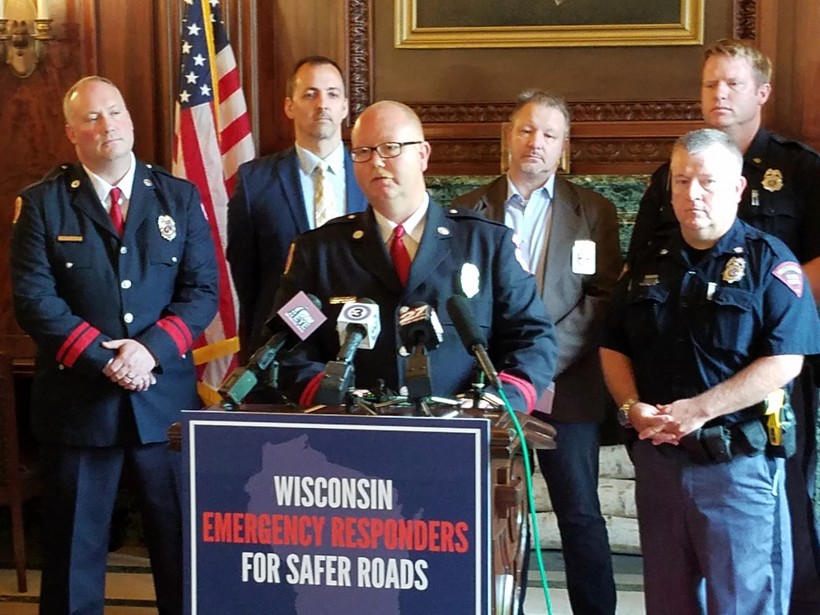 Their call comes two days before the Legislature's budget committee is scheduled to debate Gov. Tony Evers' road budget, which would increase taxes and fees to boost road funding by more than $600 million.

"We stand here as a united group focused on public safety," said Mike DeGarmo, a lieutenant with the Racine Fire Department. "And we're asking the state Legislature to find some common-sense, sustainable solutions to transportation funding."

Grant County Sheriff Nate Dreckman said said poor road conditions affect the routes his officers are able to drive in an emergency and how fast they're able to drive.

"In Grant County, for example, we have a highway that, over the wintertime, would buckle heavily to the point that first responders would avoid that road because of the roughness of it and take other alternate routes to get to scenes, delaying their response," Dreckman said.

"Last summer, literally every day, they were responding to a blowout tire," Brigham said. "Any time someone is on the side of the road, whether it's a citizen or a first responder, you're putting those people's lives at risk."

Fitzgerald and Assembly Speaker Robin Vos, R-Rochester, were at odds over transportation funding two years ago, with Fitzgerald and former Gov. Scott Walker generally opposed to new taxes or fees and Vos pushing aggressively for new revenue. Vos said earlier this year that Republicans won't fight amongst themselves during this budget debate.