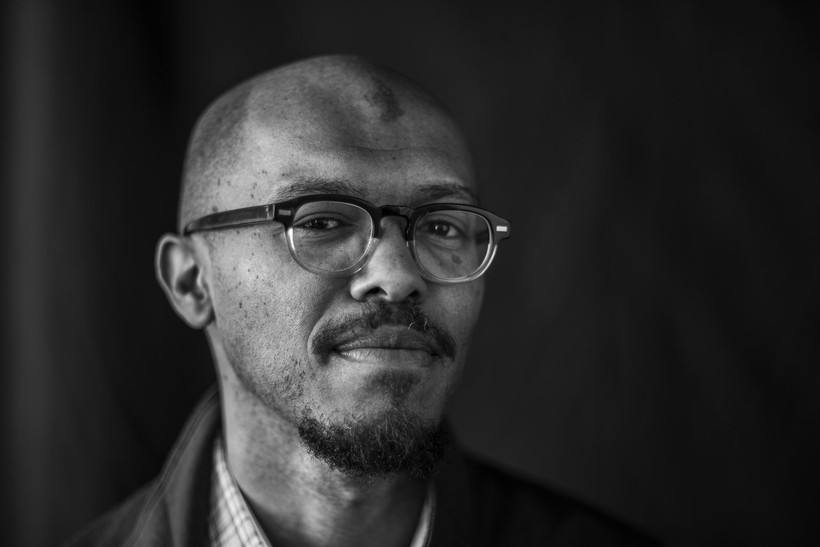 Author and director of the MFA Program in creative writing at UW-Madison, Amaud Jamaul Johnson. Photo by Victoria Smith

UW-Madison Poet Discusses His Newest Work, And The Inspiration Behind It
By Melissa Ingells
Share:

A new book from University of Wisconsin-Madison poet Amaud Jamaul Johnson — "Imperial Liquor" — taps into themes of paternal protectiveness, the pervasiveness of racism and the possibility of empathy. Johnson is the director of the MFA program in creative writing at UW-Madison. This is his third published collection of poems.

Johnson spoke with WPR’s Melissa Ingells about the new book, beginning with what fed him creatively while he was writing it.

Amaud Jamaul Johnson: I was very interested in the music of the early 1970s. I always listened to a lot of love songs — slow jams. And what’s interesting about that is the way that music played against what was actually happening in the black community — post- Civil Rights Movement, post-Black Power movement — where there was an injection of drugs in the black community. There was kind of a dismantling of social programs that were so heavily fought for during the '60s. And you began to see a generational shift.

So, the desires that were wrapped up in that music seemed to almost push against or create a dramatic irony, given that particular narrative of pain in the black community. So some of what I was interested in with this book touched on those moments, to think about that particular pain.

'The Offering Of The Hand'

Melissa Ingells: I noticed a lot of dedications to various folks, and I find myself now wondering if some of them were musicians, or did it just depend on the poem who you were speaking to?

AJJ: I think I was in conversation with a lot of friends and family members. Poets are particular because we are both introverts and extroverts. There are things that we do in the dark, and then we say, "Oh, look at what I’ve created." We are constantly feeling disconnected at the same time that we want to build community. So those dedications — and then think about the slow jams, like, "This one is dedicated to the one I love." So, there’s that idea of the poem constantly reaching out.

I believe that a poem is one half of an imagined conversation. So rather than thinking of it as something that’s isolated, there’s that offering of the hand. In a dance someone offers someone a hand and pulls them in. So, those dedications are not just honoring others, but I really see the poem as a kind of offering. An introduction. To pull someone into a conversation.

Churches And Liquor Stores On Every Corner

MI: Tell me about the title.

AJJ: I’ve lived in Wisconsin now for about 20 years, but I grew up in Compton, California. And I remember growing up thinking one of the defining characteristics of my neighborhood was that on every corner there was a church and a liquor store. This would kind of repeat itself across the community. So, "Imperial Liquor" is partly a nod to that. But I also like the idea of thinking about imperialism and being drunk on power. There’s something very grand about that idea, but then there’s also a way that the desire for power pulls us apart. It’s a thing that disintegrates the spirit. Those were the things I had in mind when I gave the book that title.

MI: What do you want people to experience when they read your work?

AJJ: I think what I’m after in this book, and what I hope readers take away, is that this process of loving each other requires a degree of vulnerability. I’m not ready to let go of empathy. We have to figure out how to talk to each other, to talk to strangers. It seems culturally ... I’m not sure what happened. But we’re not making eye contact. We’re not having those small conversations that we used to have 10 years ago on airplanes or buses. And as much chatter that exists digitally, I think we are very quiet culturally and interpersonally. So this book is challenging that, maybe kind of pushing people to consider how we talk and how we touch.