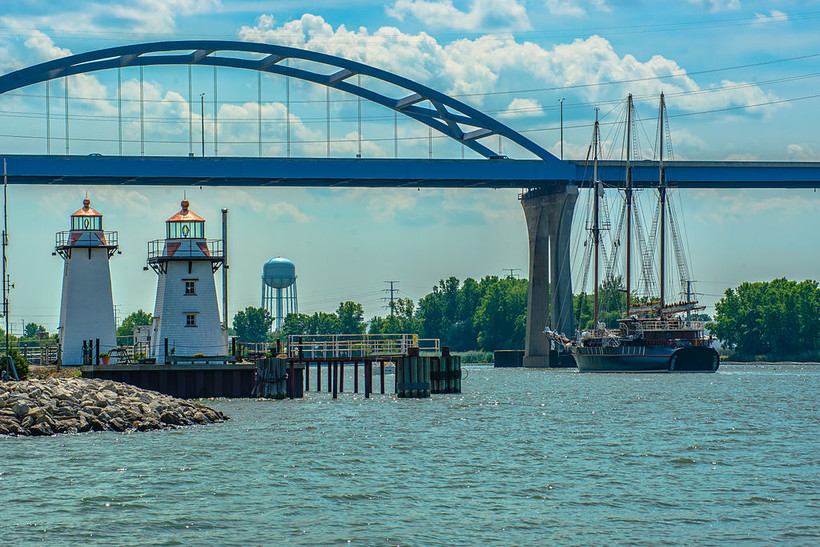 The Peacemaker sails toward the Leo Frigo Memorial Bridge on it's journey into the Port of Green Bay. Chris Rand via Wikimedia Commons

Petroleum Imports To Port Of Green Bay Up Significantly

The Port of Green Bay consists of 14 businesses spanning over 3 miles of the Fox River. In an annual report, Brown County Port Director Dean Haen said the businesses moved a bit more than $1.8 million metric tons throughout 2017.

Haen said there is a basic reason for the jump in petroleum imports.

"The reason for that change is the shutdown of a pipeline that was supplying petroleum products to the Green Bay area between Green Bay and Milwaukee," Haen said.

The West Shore Pipeline, in northeastern Wisconsin, once moved petroleum but closed in spring 2016. Since then, Haen said gas and diesel fuel have been brought via ship instead of through a pipeline. He said the shutdown means that Green Bay has "flipped" from being a petroleum exporter to being an importer.

"We are in demand of petroleum products so it’s being imported whereas before the pipeline was coming in, and we had an oversupply and the demand was further east to the East Coast," he said.

Imports of road salt were also up significantly over 2016 with a 34-percent increase in United States salt and a 78-percent increase of foreign road salt. Haen said the salt came in handy for cities and towns around northeastern Wisconsin during April’s record blizzard.

The port may see expanded movement when the Leicht Park dock reopens later this summer. The historic dock has been closed for years. A cruise ship was expected to come through this year but Haen said the vessel needed repairs. Instead the ship is expected to visit in 2019.