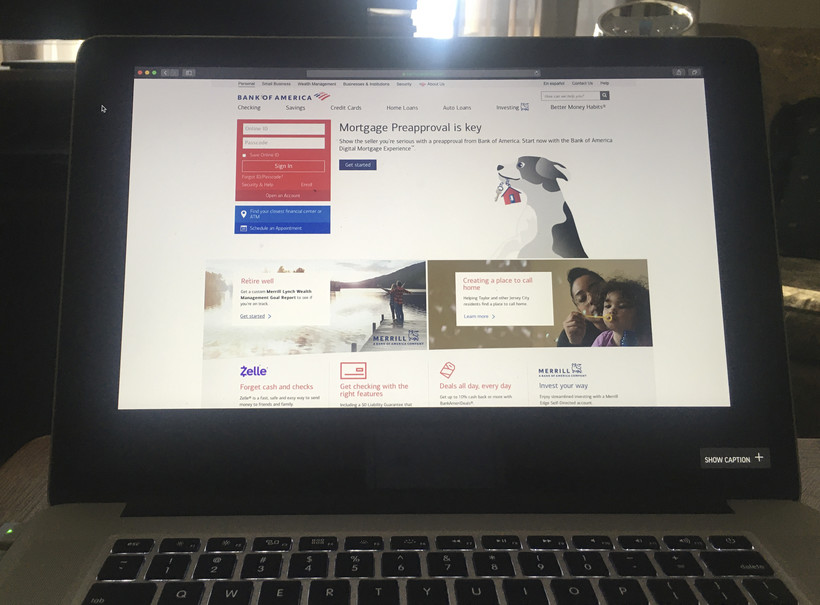 Bank of America's homepage is displayed on a computer screen in White Plains, N.Y., on Tuesday, March 24, 2020. Online banking lets you manage your finances remotely, without visiting a bank branch. That is particularly helpful as many people self-isolate to avoid contracting or spreading the coronavirus. AP Photo

Chris Hogan Says Adjusting Our Mindsets Will Help Us See Where We Can Save
By Elizabeth Dohms-Harter
Share:

The new coronavirus and subsequent spread of the disease it causes, COVID-19, is forcing new behaviors during what personal finance expert Chris Hogan calls "unprecedented times."

One of those shifts, he said, should be toward a conservative mindset when it comes to our finances.

"We're used to doing what we want, when we want," said Hogan, author of "Everyday Millionaires: How Ordinary People Built Extraordinary Wealth and How You Can Too." "But in reality, a lot of our financial situations aren't where they need to be."

Adopting a willingness to conserve means understanding the difference between a want and a need, Hogan said, in addition to protecting what you currently have. Needs, as Hogan refers to them, are shelter, utilities, food and transportation.

That means diverting cashflow to mortgage or rent, electricity bills to keep the heat and lights on, nourishment for yourself and your family, and ensuring you have enough gas and a vehicle or another form of transportation to get around.

"Those are the four absolutes that we must take care of month in and month out," he said.

Hogan said not much has to change for people whose income is stable. For example, people who were trying to bring down their debt previous to the outbreak should continue on that path. For those whose incomes have been cut in half or lost altogether, he advised to cut out unnecessary spending.

Take gym memberships, for example. The gyms are closed, but membership fees are still being drawn from accounts each month.

"I think it's really important for people to understand they have that power to be able to take control," he said. "And when things get better or income stabilizes, then you can look at adding back what's necessary."

Millions of people will get some help in the form of stimulus checks or tax refunds, and Hogan warned that those dollars should be set aside for things that are needed. And although it might feel good, now is not the time to medicate with online shopping, he said.

He advised that people unsubscribe from retailer emails that might incentivize browsing and shopping online.

"We've got to rise up right now and really begin to say, 'What's necessary for my family and how do we begin to get through this all together?'" he said. "That collective mindset will help to change people's perspective as we walk through this tough time."

Hogan said if people don't have the money to pay their bills, there are a few steps to take. First, call your creditors, including the landlord or your mortgage servicing company. Explain your situation, whether it's that your income is cut or you lost your job, and let them know what you're going to do.

It's important that people not ignore the problem, because that'll just make it worse. But it's also noteworthy to make sure you're not making promises you know you can't keep, such as that you'll have the rent check next week when you're not exactly sure you'll have enough money to pay.

"Be open and honest and upfront and give them an opportunity to hear you," he said. "Don't expect them to like it. But you don't like it either. So, it's best to communicate."

Investing In The Stock Market

Fear over the pandemic is reflected in rollercoaster fluctuations in the stock market, but Hogan said it will recover as it has in the past. He pointed to the dive it took in 2002 of almost 12 percent during the SARS epidemic and then made a gain of 19 percent by the end of 2003.

The same was true during 9/11 and the Great Recession.

"I'm wanting to remind people out there that the stock market is going to come back," he said. "What we have to do is call on our resiliency and awareness and a plan until that happens."

If you've already put money in the market, leave it there. But follow up by reaching out to your investment professional who can look at your portfolio and get a better understanding of what your goals are and how much time you have.

"You want to work with someone that's in this all day long, not somebody just jumping in and out, trying to time the market," he said.

In short, Hogan isn't a fan of the idea of pulling money out of retirement savings during this time.

"That's one of the things that the government talks about — allowing people to be able to do — that really made me want to pull my one hair out," he said.

It might be tempting now to look at it, become frustrated with the loss and want to pull out your money. But he said by doing that, you're also removing any opportunity for a rebound.

"Getting out right now is a bad move," he said. "It's going to remove the opportunity for you to be able to catch the wave when it comes back up, because it's going to come back. I just can't tell you when."

Certainly, there are people who are looking to make big purchases now, for example buying a house.

Hogan said before taking that step, we need to prepare ourselves for unforeseen things that might come up. Because of this, he recommends first attacking your debt and then establishing a 3-to-6 month emergency fund before beginning to save for a down payment.

"We don't want to be one job loss or income drop away from losing that home," he said.

Related Links:
Managing finances during the coronavirus.
Investing during a bear market.