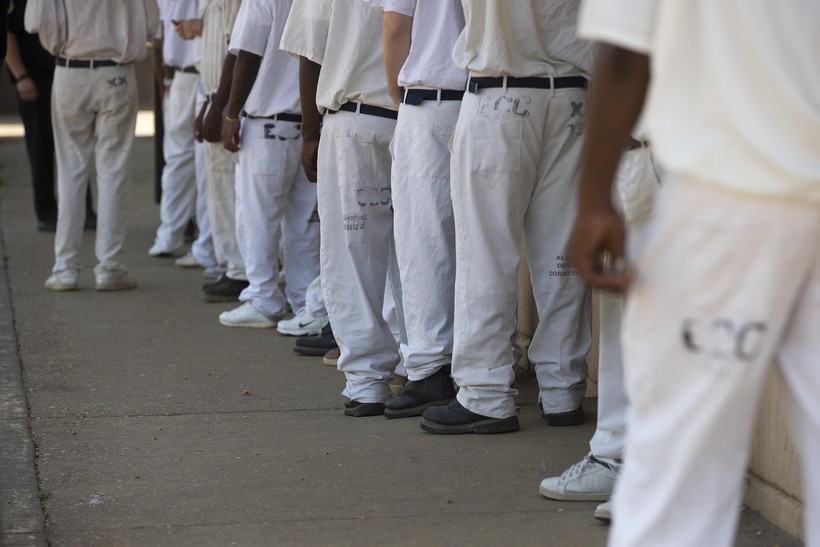 The Wisconsin Department of Corrections is temporarily suspending in-person visits at state prisons as active COVID-19 cases among inmates have tripled in the past week.

Last Thursday, the DOC reported 466 active cases of the coronavirus among people housed in state correctional facilities. That figure grew to 1,415 active cases as of Thursday afternoon, according to the agency’s COVID-19 dashboard. New Lisbon Correctional Institution made up more than one-third of active cases with 532 inmates currently infected with the virus.

Much like everywhere else, DOC Secretary Kevin Carr said the agency has seen a sharp rise in cases due to the highly contagious omicron variant.

"DOC has not seen any corresponding increase in serious illness among people in our care, likely due to a combination of the high vaccination rate in our facilities and evidence that this omicron variant causes less severe disease," said Carr in a statement Thursday. "However, we feel making these temporary changes is the best way to protect our staff, those in our care and the communities surrounding our institutions."

Active cases of the virus among corrections workers have also increased roughly 30 percent in the last week, growing from 365 to 478 employees who are currently infected with COVID-19 over the same period.

The agency resumed in-person visits in July after suspending them for 15 months due to the onset of the COVID-19 pandemic. The move this week signals a return to video visits with families and loved ones.

"It is really disappointing. However, we do believe it is in the best interest of everyone — not just the people in their care," said Peggy West-Schroder, statewide campaign director for EX-incarcerated People Organizing, or EXPO, based in Milwaukee.

On Thursday, corrections officials announced several other changes to limit the spread of the virus. They include temporarily suspending entry for volunteers, contractors and other non-DOC staff except for emergency services or necessary work at facilities.

Religious volunteers will still be allowed to enter facilities, but attorneys and other professional visits must be temporarily conducted by phone or video.

Those who are allowed entry will be required to follow making and social distancing, as well as take a rapid antigen COVID-19 test beginning Tuesday. A DOC spokesperson said staff without proof of vaccination are tested once each week and ordered to follow Centers for Disease Control guidelines if they test positive.

Transfers between correctional facilities and outside medical visits are being evaluated on a case-by-case basis. DOC staff will continue to offer educational, vocational and treatment programming for inmates while following COVID-19 safety precautions. Inmates will also be allowed to continue to take part in work release, community service or education outside DOC facilities with additional testing for two to three days each week.

Shannon Ross spent 17 years in prison for reckless homicide in what Ross has referred to as a "massively stupid act of revenge" as a teenager. He was released from Prairie du Chien Correctional Institution in September 2020. Ross, who is executive director of The Community, said there’s not much the agency can do to stop the spread of COVID-19 in prisons.

He said corrections officials have made no progress on releasing people to avoid "sardine-like" capacity.

Weekly data from the last Friday in each month showed the prison population dropped by nearly 16 percent between the end of February 2020 to February 2021, according to a report from the Wisconsin Policy Forum. DOC releases about 9,000 inmates each year.

Even so, advocates for those incarcerated have pushed Carr and Gov. Tony Evers to release more individuals since the onset of the pandemic, especially those most vulnerable to complications from the virus.

"It's impossible to separate individuals. They're going to be put together, and there's nothing you can do about the spread in there," Ross said. "Luckily, there's been a higher vaccination rate in the Wisconsin prison system."

Around 81 percent of more than 16,000 people housed in state prisons are fully vaccinated. Despite the high vaccination rate, West-Schroder said she still worries about her nephew housed at Racine Correctional Institution.

"He's had COVID already. He's also vaccinated, and so I feel a little bit better about his situation, but I'm not going to lie. I still worry," she said.

At least 33 people housed within state prisons have died from COVID-19. West-Schroder said the surging number of hospitalizations statewide is one reason behind her concerns. She said she thinks the changes to outside medical visits is due to the lack of staff available to transport and monitor individuals seeking care.

Corrections officials will review whether to extend or lift the changes in early February.