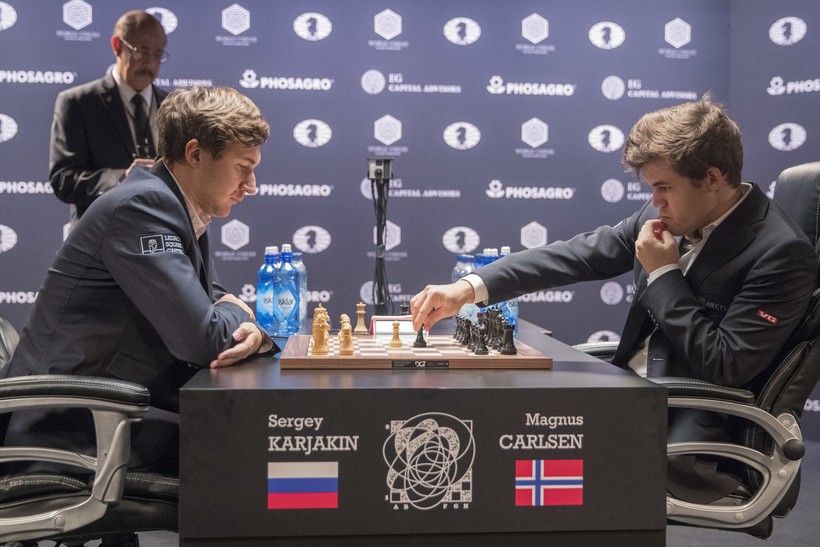 Defending champion Magnus Carlsen, right, of Norway, makes a move against Sergey Karjakin, of Russia, during the tie breaker round of the World Chess Championship, Wednesday, Nov. 30, 2016, in New York. Mary Altaffer/AP Photo

Chess, A Perfect Game For Crushing Your Opponent’s Ego

Chess has a reputation as a highly intelligent, elegant game. But sportswriter Brin-Jonathan Butler says it’s also addictive — and sadistic.

In his book "The Grandmaster," he gives an inside and insightful look into the game, focusing on the 2016 World Chess Championship in which Magnus Carlsen of Norway and Sergey Karjakin of Russia — both 25 years old — battled each other for the title.

"To the Best of Our Knowledge" executive producer Steve Paulson spoke with Butler about the 2016 match and the culture of ultra-competitive chess.

This article has been edited for brevity and clarity.

Steve Paulson: You’ve covered a lot of sports, especially boxing. So chess would seem to be a very different kind of thing to write about. I'm wondering if you see any parallels between two boxers getting in the ring and two chess grandmasters facing off against each other?

Brin-Jonathan Butler: I saw immense overlap in it, the intensity of it. You don't have the physical manifestation of it, but watching these two guys for five or six hours, only a couple of feet away from one another, you'd watch them almost age a decade.

Chess has such an extraordinary audience — hundreds of millions of people. It was really palpable, in this sort of "death chamber" setting at the World Chess Championships where they took place.

So a different kind of intensity, but equally intense to some of the stakes with boxing.

SP: What makes this kind of high-level chess match so intense?

BB: You’re looking at a one-in-a-billion-type person in terms of the mind that's required to operate at that kind of level.

Magnus Carlsen could play with his back turned to 10 tables of grandmasters and keep it in his head — all of the games being played simultaneously — and just trounce any kind of competition. It seems almost otherworldly, these kind of mental feats.

Both of these guys are child prodigies, identified extraordinarily young, who then have to submit to this kind of indentured servitude of 10-, 12-, 14-hour days for many years in order to get (to) where they were in 2016.

And also, despite how many people participate in chess, and despite that it's a game that's been around for 1,500 years, very few people can make a living doing it — the idea that they were playing for $1 million purse, that's a very big deal within the game of chess. Whereas in boxing, there are a lot of high-stakes prize fights going back decades, where people are fighting for millions of dollars. So that was another facet of it that you could feel the intensity of what it meant to win.

SP: You've written about how some of the most famous names in the history of chess — from Bobby Fischer (an American chess grandmaster and World Chess champion) to the current champion, Magnus Carlsen — haven't just wanted to win. They wanted to crush their opponent. They wanted to destroy their opponent’s ego.

BB: I think that that was the biggest takeaway that I had, just how incredibly sadistic chess players are at the elite level. And I don't think that's exclusive to chess.

I find most of the people that I've interviewed who are excelling in any arena of ambition, it requires a kind of sadism that is really frightening. We like to think that virtue is what drives these people to get on top. It's rare.

Looking back with Bobby Fischer, being asked by Dick Cavett (on "The Dick Cavett Show"), "What's the home run in chess?"

SP: What about you? Do you play chess?

BB: I do play chess, but very hesitantly, because I find it tremendously addictive, which was a pretty big theme of this book. These were some of the most highly addictive people that I'd ever come across — and I come from a family of several alcoholics and that kind of predisposition.

But there's a wonderful chess shop — The Chess Forum — here in New York City, in Greenwich Village. And the man who owns it said to me, "I'm like a bartender to alcoholics."

This is a far more addictive substance than cocaine or alcohol or any other drug I've ever seen. People are throwing away their families. They're throwing away their lives. These are highly educated, highly capable people. And very quickly, life kind of telescopes into having one purpose: that next game of chess.

SP: So why is chess so addictive?

BB: I think it's just such a perfect game. It’s such an interesting counterpoint to life. If you (compare chess to a) game like poker, (poker) is a game of incomplete information. So it has this chaos at its heart, which I think mirrors life in a way that attracts people.

SP: And then there's an element of luck, obviously, in play in poker. Whereas there's no luck in chess.

BB: I don't know if I would say luck. There can be human fallibility that you take advantage of, but you're right.

(Chess is) a game of complete information. Unfortunately, it's so vast that after only a handful of moves, you're going into the potential for billions of possibilities. So it's this ocean without a horizon. The fact that it's unsolvable, I think, is what makes it such a perilous adventure for these minds to go as deep as they possibly can into it.

For 1,500 years, (chess) has been able to infect hundreds of millions of people around the world, regardless of creed or ideology, culture. When we think about in those 1,500 years — all the things we've lost — it's fascinating to me that chess has been able to persevere with such signal, whereas (when) historians look back at important events in history that shaped the world, (they're) just noise. But chess is pure signal.

I think that's very attractive and appealing in a dangerous way for certain minds.