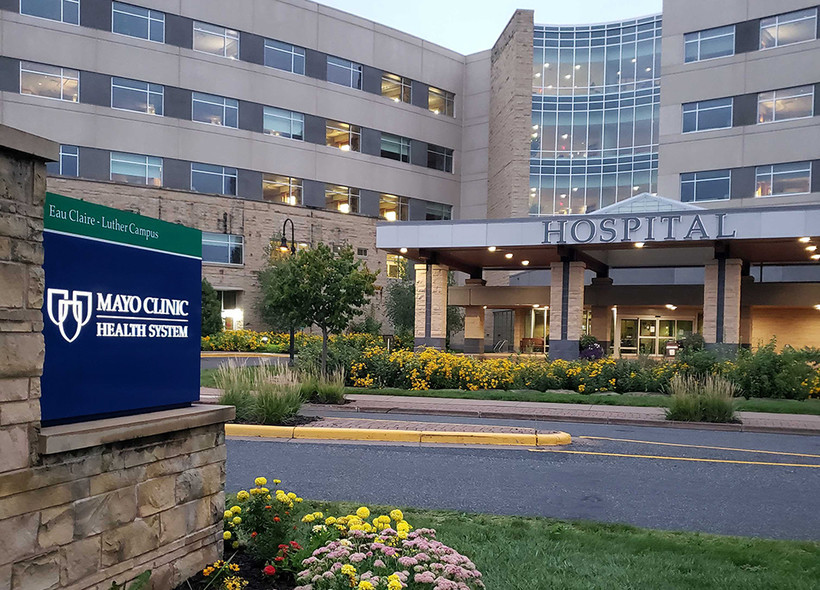 Dr. Steve Weiss is employed at Mayo Clinic Health System in Eau Claire but on leave through Sept. 13 after the board decided to terminate his employment agreement. This comes after he published a book in which he mentioned he worked at the hospital but didn't follow hospital procedure on publishing. Weiss said he didn't know such a policy existed. Liz Dohms-Harter/WPR

Patients Grieve Firing Of Mayo Clinic Doctor After He Self-Published A Book About COVID-19, 2020 Politics

An Eau Claire Mayo Clinic Health System doctor was fired in June after writing and publishing a book about his experiences working on the front lines of the COVID-19 pandemic.

Dr. Steven Weiss, an internal medical physician, self-published his personal blog as a book entitled, "Carnage in America: Covid-19, Racial Injustice and the Demise of Donald Trump." In the book, he mentions he worked at Mayo and did not disclose that the opinions expressed were only his own. Three days after the Eau Claire Leader-Telegram published a story about his book, he was escorted out of his office. 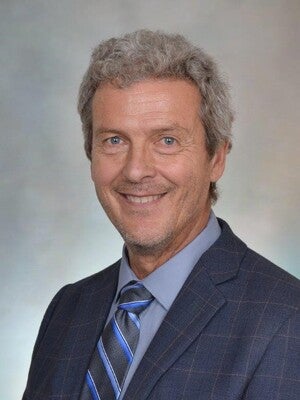 He was fired on June 11. Weiss, 62, had been employed at Mayo in Eau Claire for 32 years. He will be paid through Sept. 13 and is currently on administrative leave.

In a detailed letter to Weiss on June 4, Mayo Clinic top regional administrators laid out the causes for his firing, alluding to a violation of Mayo policies, including publishing and code of conduct.

"They said because I had identified Mayo as my workplace, that the book could be assumed as speaking for Mayo," he said. "But on the other hand, they criticized me for occasionally being critical of Mayo's policies."

Weiss admitted it didn't cross his mind to ask Mayo for permission, though he said "it should have." Still, he believes his actions don't justify his firing, and he pointed to losing his load of 850 Mayo patients as "the most tragic thing" to come out of his firing.

After receiving news that Weiss was no longer a health care provider at Mayo and being told they'd be assigned new care providers, several patients wrote to both Weiss and Mayo, chiding the decision.

Ronald Mickel, an Eau Claire resident and patient of Weiss', wrote in a July 19 letter to Dr. Abdulla Akfaly, chair of primary care and internal medicine: "To his patients and friends, the punishment is not justified by the offense."

"I ask you to do all that you can to have Dr. Weiss reinstated," Mickel continued. "The credibility of Mayo and your department is at stake."

Sharon Pederson had been Weiss' patient for 30 years and said she appreciated how accessible he was.

"Especially as I grow older, it was a great comfort to me to know that my physician of so many years knew me, my foibles and sometimes my anxious concerns," she wrote in an email. "After all the years, he was not only my doctor but in a way, a trusted friend."

Another long-time patient, semi-retired pastor Sandee Kosmo, said while she believes he received "bad advice" from those who encouraged him to write the book, his career shouldn't have ended in a firing.

"He has had a stellar career and has been an asset to Mayo Clinic for 32 years!" she wrote in a letter to a Mayo administrator. "As a pastor, many persons have shared with me their thankfulness for his specific care and his caring way."

A letter to Weiss from Dr. Richard Helmers, regional vice president of Mayo Clinic Health System — Northwest Wisconsin, dated June 12 explains that a personnel committee agreed to terminating his employment without cause. The board of directors accepted the recommendation on June 11, according to the letter.

Although Wisconsin's employment laws protect employees against discrimination on bases of religion, sexual orientation and use of lawful products, among others, an employer can discipline or fire an employee for creating a hostile work environment, said Steve Weld, an attorney at Weld Riley, S.C. in Eau Claire, who was not speaking directly about Weiss' case.

Mayo Had Concerns About Weiss Prior To Book Publishing

Mayo didn't respond directly about whether Weiss created a hostile work environment. But a statement attributed to Helmers said that Weiss' contract is ending "for reasons beyond the publication of a book," and references previous communications with Weiss where he was made aware of concerns the clinic had about him.

Referring to himself as "political," Weiss said he's been an active contributor to the local newspaper's op-ed pages. In one opinion piece from March 2020, he reflected on the COVID-19 pandemic and was critical of the U.S.'s early response to the pandemic. He lambasted former President Donald Trump and conservative media for downplaying the significance of the virus.

The opinion piece resulted in a complaint from a Mayo Clinic patient who assumed the piece reflected Mayo's position. Weiss acknowledged that was a legitimate concern. 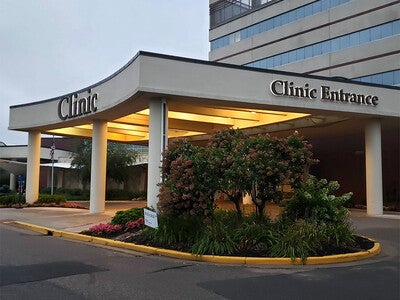 Mayo said Weiss was given a warning about the op-ed in 2020 that "made it clear the use of the Mayo name and identification of yourself as a Mayo physician could not happen again and that a recurrence of this could result in termination."

Clinic administrators said he was notified several times about policies regarding staff identifying themselves as Mayo employees. But Weiss said he wasn't aware of the clinic's policies about book publishing, and assumed that was different from writing op-eds.

"I had no idea Mayo had the right to pre-approve the book," Weiss was quoted as saying in a transcript of a conversation with Mayo administrators. "I didn't willfully put my finger in their eye. I think that's what people think I'm doing."

In his statement, Helmers said Mayo has specific policies for how staff behave in their private lives, and that's to protect the trust of its patients.

In the June 12 letter, Mayo administrators also voiced concerns about Weiss' judgement, in part referring to two patient complaints. One in June 2013, involved a patient who felt her privacy was violated because a male student observed Weiss performing a pelvic exam. In April 2016, a patient was upset regarding comments Weiss allegedly made to a patient about dating a family member. Weiss dismissed the first as a "system problem" and the second as "libelous."

The Mayo letter to Weiss on June 4 states: "After reviewing your disciplinary history, the committee concluded you demonstrated repeated poor judgment, a lack of insight into the significance of your actions, a blurring of boundaries between your personal interests and your role as a Mayo physician and a disregard of policies about use of the Mayo name and self-identification as a Mayo employee in connection with personal pursuits. The committee also concluded the organization was lenient and could have taken more significant corrective action sooner."

Helmers' statement says that Mayo Clinic's disciplinary process gives its employees opportunities to improve and correct concerns. He said termination is the last step of that process.

"While Mayo Clinic does not publicly disclose details of personnel matters, we are confident that the situation being described was handled appropriately," the statement said.

The experiences and ponderings that would eventually become Weiss' book began as diary entries in late March 2020. Weiss wrote for 10 days and then asked his son to help him turn those entries into a blog.

"And then I wrote for eight straight weeks, seven days a week," he said.

He ended up with 56 entries that he estimates are about 1,200 words apiece. He broke from writing for a few months before picking it back up. His last entries were written mid-November. 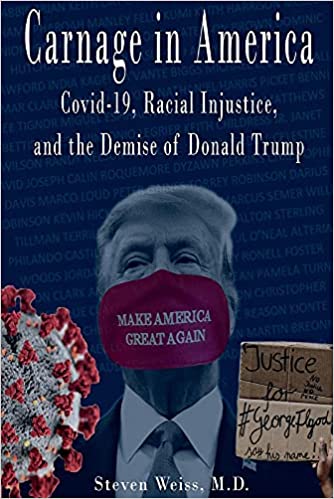 Weiss' book focuses on his own experiences with patients who had COVID-19. It expands beyond the pandemic and comments on other major newsworthy issues that dominated last spring and summer, including the killing of George Floyd, the shooting of Jacob Blake in Kenosha and the presidential election.

Weiss said while the blog didn't have many subscribers, he had great support from his medical community at Mayo and from people affiliated with the University of Wisconsin-Eau Claire.

He said he wanted the book to be a record of the events that took place during the momentous year that was 2020, but also as a way to condemn Trump as a "danger to the Republic" and add to the voices against his possible run for president again in 2024.

Weiss questioned whether politics were involved in the decision to fire him, and has considered that Mayo, as a nonprofit organization, might be afraid of turning off Republican donors.

When asked if they had received any complaints about the subject matter of Weiss' book, Mayo declined to respond.

Helmers emphasized that the organization makes no personnel decisions based on a person's political beliefs. Rather, Mayo Clinic administrators had concerns about Weiss describing interactions with patients in his book, though he said he changed information about those patients to protect their identities.

In the June 4 letter to Weiss, administrators say the book contained at least 14 references to Mayo and 24 "patient vignettes that are not allowed by policy. Had the book been properly submitted for review it would not have been approved for publication as written."

'I Would Love To Go Back'

Weiss said he would return to Mayo Clinic if given the opportunity, but said he believes a return is unlikely.

"I would love to go back and work there because I had great colleagues and great staff and wonderful patients that I love very much," he said.

His contract, dated Dec. 26, 2001, states that he cannot work within 25 miles of Mayo Clinic in Eau Claire for two years.

"I would love to go back and work there because I had great colleagues and great staff and wonderful patients that I love very much," Weiss said.

Weld, the attorney, said non-compete clauses are enforceable in Wisconsin, though they're frowned upon.

"I think it is difficult for an employer to argue the non-compete is necessary to protect our interest when the employer has said we don't want the employee anymore," he said.

Still, Weiss has accepted a position as an internal medical physician about 60 miles from Eau Claire in Rice Lake, a position he'll begin Nov. 1. He also plans to work at a clinic nearby in Ladysmith.

"I can continue doing some of the work I loved so much at Mayo last year during our COVID surge," he said.

Weiss said despite all of this, he doesn't regret writing the book. He wishes he made changes, for example leaving out that he was employed at Mayo. But he said he believes in the importance of having a record of what life was like during the pandemic.

In response to WPR's inquiry, Helmers said he finds it "regrettable that efforts continue to be made to divide people in our community and generate publicity to increase sales of a book."

The patients, though, are just feeling a sense of loss.

"I am not being melodramatic when I say that I am grieving," Pederson, Weiss' longtime patient, wrote. "Those more erudite than I may be able to put his firing in a political context or as an example of constitutional/civil rights violation or an institutional challenge to labor laws. I just feel a deep sense of loss and my outrage erupts on his behalf. This is simply wrong."

In an email to Weiss in late July, another long-time patient, Sue Brown, wrote: "Hey Steve — been trying to work through my anger, sadness, and grief over losing you as my doctor for the last month now. So hard."

Citing gratefulness for his care, she wrote: "You will always be an important part of my life."