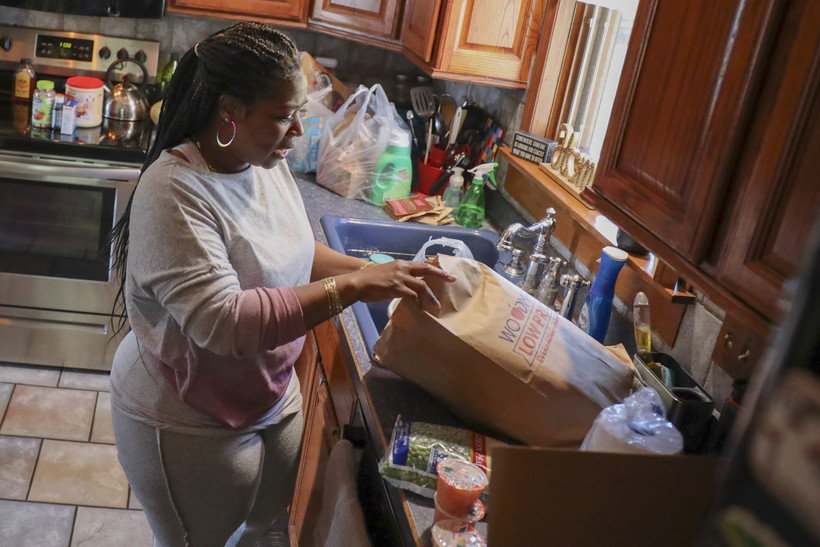 Margaret Benton, 48, unloads groceries obtained from the Sun Prairie Emergency Food Pantry, at her home in Sun Prairie, Wis., on April 9, 2022. The mother of eight children, Benton has relied both on FoodShare, Wisconsin’s government food assistance program, and on charitable organizations such as food pantries for many years. While she understands some people feel stigma for using food assistance, Benton has never been ashamed. “This is why our community has stuff like this,” she says, "to help us in times of need." Coburn Dukehart / Wisconsin Watch

Some pandemic-related changes could transform FoodShare and other solutions to hunger — if the policies survive expiration dates and the state’s political divide
By Erin Gretzinger | Wisconsin Watch
Share:

Margaret Benton has held many roles since she moved to Wisconsin nearly 20 years ago.

With eight children — two living at home and others who live close to her house in Sun Prairie — Benton, 48, juggles motherhood with three jobs. She works as a cashier at T.J. Maxx, a bistro hostess at the East Madison Marriott Hotel and a social services specialist at Tellurian Behavioral Health.

Benton is also a student. After one more semester at Madison Area Technical College, she will have a liberal arts degree in human services with a minor in sociology.

And there’s another role she’s had to play that she’s never been ashamed to admit: FoodShare recipient.

Benton is among the 951,000 individuals in Wisconsin who used FoodShare, Wisconsin’s food assistance program for low-income people, in 2021. When her FoodShare benefits fall short, Benton has used pantries to further stretch her family’s food supply.

Benton does not hesitate to ask charities and the government for help with this basic necessity — and she encourages others in need to use the help without feeling ashamed.

"I just never suffered from that (stigma) as an individual. Because I feel that this is my job as a parent to feed my kids," Benton said. 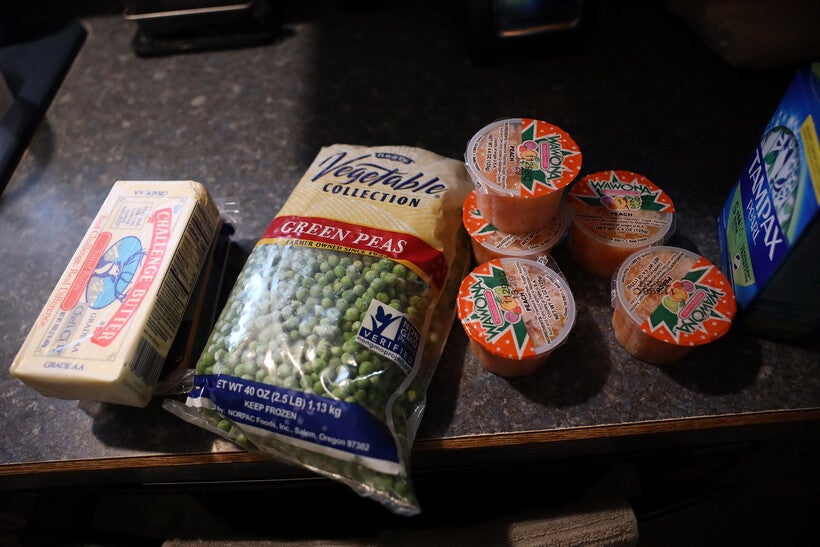 Food and groceries that Margaret Benton acquired at the Sun Prairie Emergency Food Pantry sits on the counter at her home in Sun Prairie, Wis., on April 9, 2022. Benton has often supplemented her FoodShare benefits with donations from pantries. She describes FoodShare as a continuous cycle of getting another job or increasing her income only to get setback by steep FoodShare benefit cutoffs. “I can’t keep up,” Benton remembers thinking. “The more you work, the less you get." Coburn Dukehart / Wisconsin Watch

Before the pandemic hit, 1 in 12 Wisconsinites were food insecure — meaning they couldn’t or were uncertain they could get the food they needed. Food insecurity is linked to children struggling more in school, worse health outcomes in all age groups and greater stress on families, according to the Wisconsin Food Security Project at the University of Wisconsin-Madison.

And the number of food-insecure Wisconsinites has likely increased as the impact of pandemic-related relief initiatives has begun to fade. The number of annual users of the state-federal FoodShare program grew by more than 100,000 from 2019 to 2021. Researchers aren’t certain about the long-term fallout, but national estimates suggest food insecurity during the early months of the pandemic was greater than any point in the last quarter-century.

Beyond Hunger is a new Wisconsin Watch series covering the challenges faced by many Wisconsinites in a state that exports three times as much food as it consumes. The series examines the history of food assistance, why Wisconsin residents lack easy access to government programs and explores efforts to curb food waste and reduce scarcity in the state’s food deserts.

The series also will explore a variety of solutions in the state, ranging from grow-your-own efforts, pandemic-related provisions that provided extra benefits, free school meals for all students and other policies.

Anti-hunger advocates and people using pandemic programs had hoped the changes would stick — but some of the provisions have already expired. In their absence, long-term and patchwork remedies endure, including stores on wheels, subsidies to bring grocery stores to food deserts and recovery programs that collect edible food headed for the dumpster for distribution to people in need.

Meanwhile, government funding for Wisconsin’s FoodShare program is the highest it’s been in a decade. That has sparked concerns from legislative Republicans that the state is spending too much and possibly disincentivizing work at a time when Wisconsin is grappling with a shortage of labor.

Wisconsin’s system: 'No room for error' 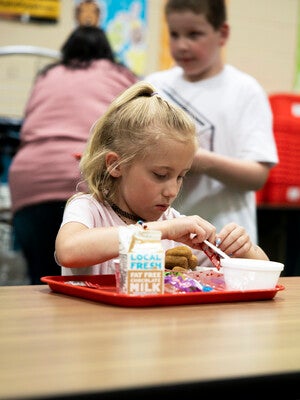 Second and third graders at Janet Berry Elementary School in Appleton, Wis., eat lunch in their classroom on June 2, 2022. Madelyn Oulton eats mini corn dogs, carrots, ice cream and milk as part of the school’s universal free school meals program, implemented during the pandemic under a federal waiver. Free meals, like many other pandemic-related support programs, have ended or will soon expire. Amena Saleh / Wisconsin Watch

"It’s really a continuum," she said. "At the one end, you have people who are anxious and uncertain about whether they're going to get the food they need, whether they can put food on the table. At the extreme end of the spectrum, you have households that are not feeding their kids for a whole day."

Hunger is not evenly distributed — especially in Wisconsin. While households in the state report less food insecurity on average, about 1 in 5 children live in food-insecure households in Wisconsin, which is higher than the national average.

At 32.6 percent, food insecurity for Black households in Wisconsin is nearly five times the rate of white households — and double the rate of the national average — making it one of the largest disparities in the country. Barfeld described the disparity as "quite stunning."

Other factors can compound the problem, including location. According to 2015 numbers from the U.S. Department of Agriculture, about 10 percent of Wisconsinites live in regions meeting the characteristics of a food desert. These are low-income or rural areas where people don’t have easy access to groceries. Lack of transportation can further intensify the challenges of living in a food desert.

"Being on FoodShare, there are a lot of limits. There's embarrassment. There’s always a mindset of (it’s) not enough," Benton said.

Today, 18 percent of those who qualify for the federal-state Supplemental Nutrition Assistance Program don’t participate, with particularly low rates of participation among the working poor.

Rebecca McAtee, who formerly ran Wisconsin’s FoodShare program, said she would be “challenged” to fill out the application and keep up with income reporting requirements. The system, she added, can be "extremely punitive."

"If they (a recipient) make a mistake … that gets deducted from that person's future benefits," McAtee explained. "There's no room for error."

FoodShare recipient Elizabeth Blume of Madison said she once lost all of her benefits after earning $6 above the eligibility limit one month.

Said Benton: "There’s lots of roadblocks that will keep you from being successful. I want to get off FoodShare, but you keep telling me I can’t make more money. How does this work?"

FoodShare has expanded benefits and worked to reduce stigma over the years, but lawmakers in Wisconsin continued to add new requirements and restrictions — until the pandemic hit. 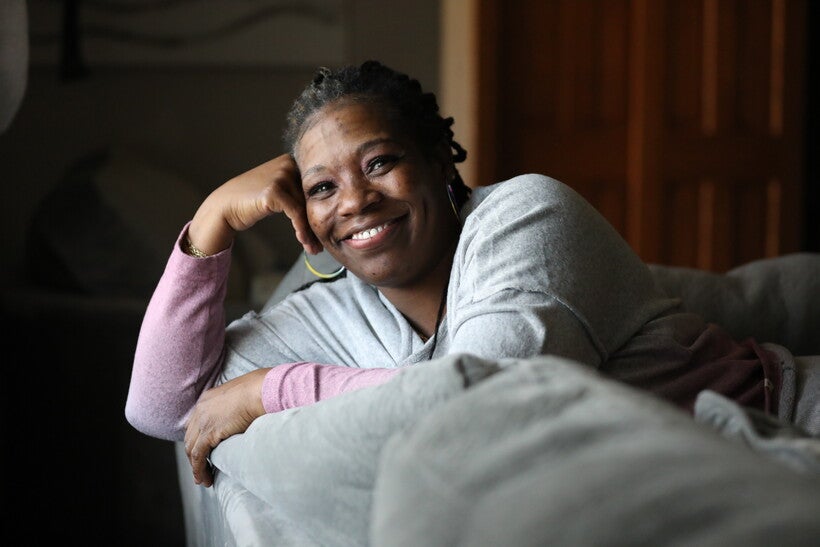 Margaret Benton, 48, is seen at her home in Sun Prairie, Wis., on April 9, 2022. Benton raised eight children and sometimes worried about where she would get enough food to feed her family. But the state’s FoodShare program and local food pantries helped sustain her family. “If I need some food, still today, I’m going to the food pantry.” Coburn Dukehart / Wisconsin Watch

As the number of economic threats grew during the first few months of the pandemic, the federal and state governments responded with a slew of policies to alleviate food insecurity as more people used assistance and emergency relief programs for the first time.

FoodShare eased several restrictions and boosted the amount of benefits families could obtain, giving all eligible families the highest benefit allotment possible — up to $459 a month for a family of two earning up to $34,800 a year — and suspending work requirements that had applied to some childless adults.

The pandemic also prompted the federal government to waive income eligibility requirements for school meals. That allowed all school districts in Wisconsin to offer free meals.

"By really going all in on trying to combat risk, we were able to actually move the needle and prevent some of the hardships that might have happened," Bartfeld said.

A 2021 analysis conducted by the White House’s Council of Economic Advisers found the implementation of federal income support systems early during the pandemic correlated with improvements in food security — and now that some of those supports have lapsed, hunger rates are climbing once again. 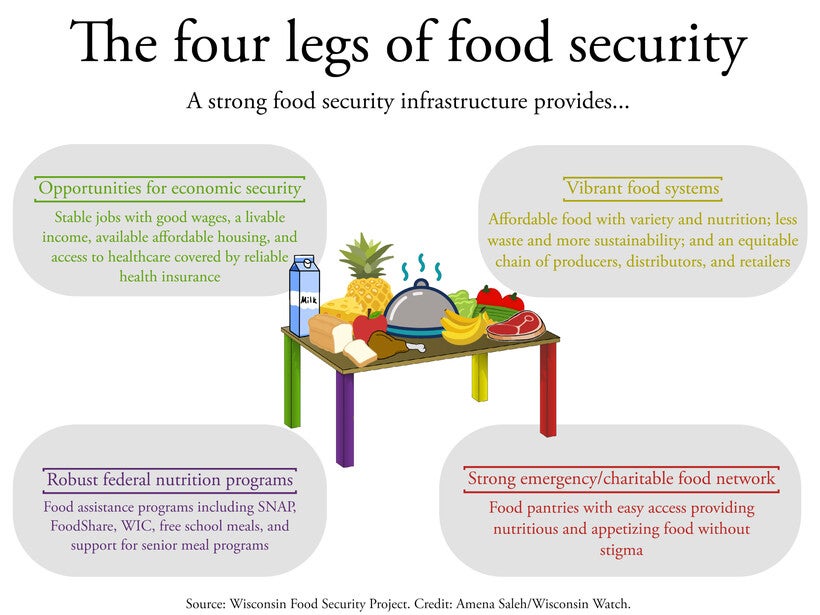 But making these changes permanent fixtures of the food assistance system is an uphill battle. With the state unemployment rate at historic lows, Wisconsin Republicans want to bring back the work eligibility requirements for FoodShare.

And while free school meals have garnered statewide support, the well-publicized pushback against free meals in Waukesha highlights the complicated nature of food-related politics.

At the most basic level, experts and advocates say the pandemic heightened awareness of the conditions food-insecure Wisconsinites experience. As many people lost their jobs, took pay cuts or stayed home to watch kids and other family members, Feeding America estimates that statewide, 40 percent of people relying on its emergency food assistance network did so for the first time during the pandemic.

For Benton, some of the gut-wrenching worry about where she was going to get food no longer weighs on her mind like it did when her children were young. She is more financially stable and receives just $23 a month in FoodShare benefits for her 16-year-old daughter. But she continues to save canned goods because she "never know(s) what might happen."

"I guess someone who is in a different position or a different living standard won’t quite understand it."

If you need more information about food access — or have a tip for a follow up story, email us at foodinsecurity@wisconsinwatch.org. Or you can text the phrase WisFood to the number 73224. We’ll follow up as soon as possible, usually within 48 hours.