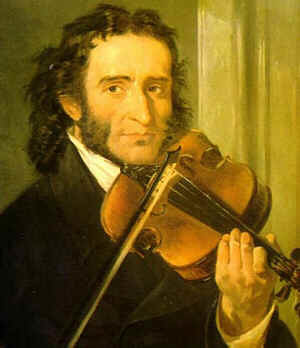 Hector Berlioz and Niccolo Paganini. The passion, the extravagance, and the eccentricity of their music was a reflection of the way they lived. Berlioz wrote one of his greatest works, Harold in Italy, for Paganini, and it brought the two composers together in an extraordinary way.

Paganini was away when Berlioz completed Harold in Italy, so he heard it for the first time as a member of the audience. At the end of the concert, as Berlioz stood trembling and perspiring with exhaustion, in through the orchestra door came Paganini followed by his son Achilles. Because of a throat infection Paganini couldn't speak, but he was making wild gestures. He motioned to Achilles, who got up on a chair, put his ear next to his father's lips, and listened carefully. Then Achilles climbed back down and said to Berlioz. "My father wants me to assure you that never in his life has he been so powerfully affected by a concert. Your music has stirred him, and he says that if he didn't restrain himself, he would go down on his knees to thank you for it."

Berlioz was flattered but embarrassed. He tried to dismiss the praise with a wave of his hand, but Paganini took him by the arm and said in a hoarse voice, "Yes, yes!" He hauled Berlioz up onto the stage and, before a good number of musicians, he knelt down and kissed Berlioz' hand.

The Next Day, Achilles delivered a letter to Berlioz. When Berlioz' wife, Henrietta, entered the room and found the composer pale and dazed, she thought some disaster had struck.

"No, no, just the opposite," Berlioz told her. "Paganini-he has sent me twenty thousand francs."

Henrietta ran into the next room, where their son Louis was playing. "Come here," she cried, "come and thank God for what He has done for your father." With that, mother and child dropped to their knees, Henrietta praying in gratitude as the astonished little boy folded his hands beside her.