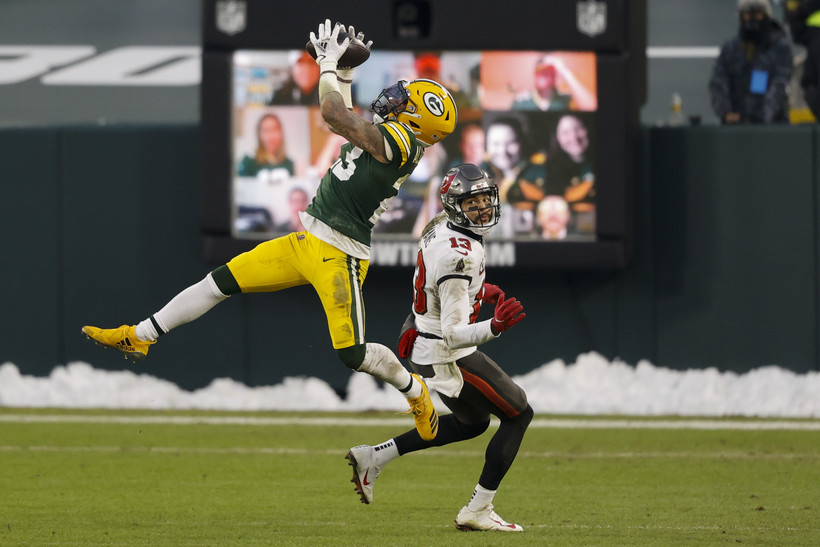 For the second year in a row, the Green Bay Packers have lost in the NFC title game.

The Tampa Bay Buccaneers beat the Packers 31-26 on Sunday to win the conference and earn a trip to Super Bowl LV.

Before the game, the quarterback matchup between Tom Brady and Aaron Rodgers got top billing, but the defensive pressure both teams managed to apply ended up being one of the biggest stories of Sunday's game. It resulted in three picks for the Packers and five sacks for the Bucs, who managed to outlast the top-seeded team in the conference.

Rodgers felt "gutted" after Sunday's game, he said. He credited Tampa's defense for its strong play, but said his offense had its chances. It's difficult not knowing what the future holds, especially for his friends who might not be Packers next year, he said. His own future in Green Bay is up in the air, he noted.

After the game, Packers head coach Matt LaFleur said he was hurting for his colleagues and the fans.

"But mostly our players, just being able to be resilient and deal with all the COVID stuff and everything else that's going on in the world, and for them to be able to focus and bring great energy and effort each and every day and continue to get better, to buy into the team concept — that's not always easy to do," LaFleur said.

During Sunday's game, Brady quickly demonstrated the playoff prowess that’s helped make him the winningest quarterback of all time. In the opening drive, he completed two throws to wide receiver Mike Evans, including a 15-yard touchdown pass, to put the Bucs up 7-0.

The Packers answered early in the second quarter. On third-and-3, Rodgers connected with wide receiver Marquez Valdes-Scantling for a 50-yard touchdown.

"I'm just really proud of (Valdes-Scantling)," Rodgers said. "He's had such an interesting year. I think it's been a good year of growth for him as a person."

With the score tied at 7, Brady completed a deep pass of his own — a 52-yarder to wide receiver Chris Godwin. Running back Leonard Fournette capped off the drive with a 20-yard touchdown run to put the Bucs on top 14-7. 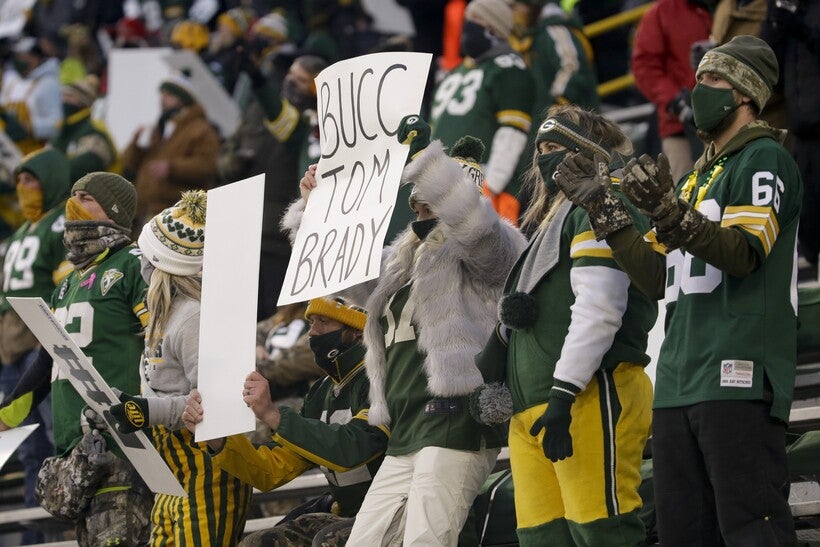 Rodgers threw five interceptions during the regular season, including two against the Bucs when the teams met in October. On Sunday, he threw his sixth while attempting to connect with wide receiver Allen Lazard. Tampa got the ball back on their own 49 just before half time, and Brady made the most of it.

With just one second left before intermission, Brady completed a 39-yard touchdown pass to wide receiver Scotty Miller. The Bucs took a 21-10 lead into the locker room.

Green Bay received the ball to open the second half. On third-and-5 from their own 30, Rodgers threw a short pass to running back Aaron Jones, who fumbled the ball after a huge hit by Bucs safety Jordan Whitehead. It was Jones’ second fumble of the day (the first was recovered by his own teammate tight end Robert Tonyan) and he left the game with a chest injury.

With the ball back, Brady continued to use Tampa’s full arsenal, immediately completing an 8-yard touchdown pass to tight end Cameron Brate, to give the Bucs a 28-10 lead.

That was before Rodgers led Green Bay down the field for an 8-play, 75-yard touchdown drive, that included another long pass to Valdes-Scantling and an 8-yard touchdown pass to Tonyan, bringing the score to 28-17.

Green Bay would get the ball back minutes later when safety Adrian Amos picked off a Brady pass intended for Evans. Rodgers finished off the resulting drive with a 2-yard touchdown pass to Adams, who had more regular season receiving touchdowns than any other player this season. The Packers went for two — hoping to further close the gap — but failed. The third quarter ended with Tampa leading 28-25.

It looked like the Bucs might add to their lead. Just yards from the end zone, Evans got his fingers on a pass from Brady, but it went through his hands and into those of corner Jaire Alexander, who returned the interception to Green Bay’s 19-yard line.

Tampa’s defense showed up on Green Bay’s next drive, forcing a three-and-out with the help of a sack on third down for a loss of 10 yards. But Tampa’s offense wouldn’t hold onto the ball for long. Brady threw his third interception of the game — again to Alexander. And again, Green Bay’s offense couldn’t capitalize.

After struggling with interceptions, Brady looked hesitant on Tampa’s next drive, but the Bucs managed to move the ball into field goal range for kicker Ryan Succop. He made a 46-yarder to extend Tampa’s lead to 31-23.

With the ball back, Valdes-Scantling caught another long pass from Rodgers — a 29-yarder. But Green Bay couldn’t get in the end zone. On fourth-and-goal at Tampa’s 8-yard line, LaFleur opted to kick a field goal to bring the score to 31-26. It ultimately turned out to be a questionable move after Green Bay’s defense couldn’t manage to contain Tampa’s offense late in the game, despite having three time-outs. Rodgers didn't have a say in the choice, but he understood the reasoning, he said.

"Anytime it doesn't work out, you always regret it, right? It was just the circumstances of having three shots and coming away with no yards and knowing that you not only need the touchdown, but you need the two point," LaFleur said.

There were fewer than 10,000 fans at Sunday’s game at Lambeau Field. It was only the second time all season the Packers welcomed paying fans amid the coronavirus pandemic.

The Bucs will become the first team ever to play the big game on their home turf. Super Bowl LV is set for Raymond James Stadium on Sunday, Feb. 7. The Bucs will face the Kansas City Chiefs, winner of Sunday night’s AFC title game.