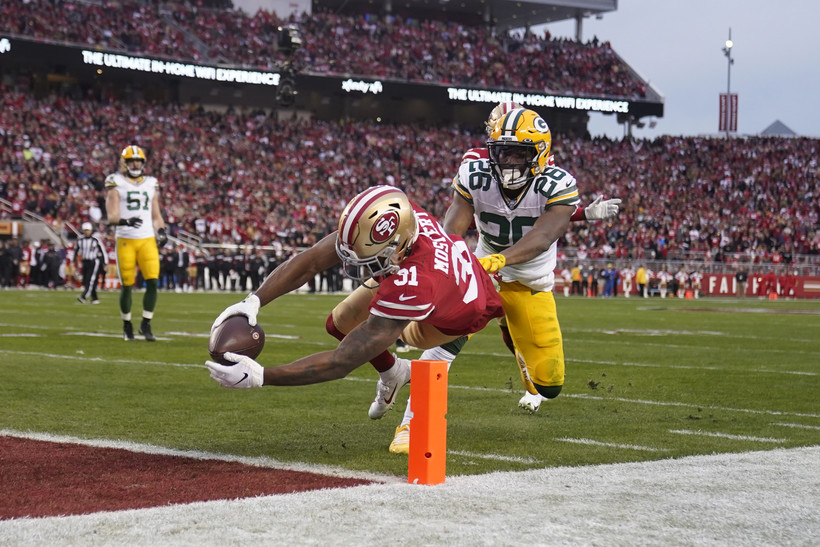 The season is over for the Green Bay Packers, who couldn't mount a second-half comeback Sunday against the San Francisco 49ers.

The 49ers beat the Packers 37-20 in the NFC Championship. They'll face the Kansas City Chiefs in the Super Bowl.

Green Bay couldn't stop San Francisco on the ground Sunday night. Running back Raheem Mostert averaged 7.5 yards per carry for San Francisco. His 220 rushing yards were the second most for any player ever in one postseason game.

"Our team is just incredible to be a part of, we can win so many different ways," said San Francisco quarterback Jimmy Garoppolo after the game. Garoppolo attempted just eight passes in Sunday's victory.

The 49ers got on the board early with a six-play, 89-yard drive that ended with a 36-yard touchdown by Mostert. They added a 54-yard field goal to go up 10-0 early in the second quarter, and ran the ball six consecutive times on their next drive to add a touchdown to their lead.

All told, the 49ers put together five-straight scoring drives and added an interception late in the first half to take a 27-0 lead into the locker room.

The second half started better for the Packers. Quarterback Aaron Rodgers led his team on an 11-play, 75-yard touchdown drive. It included three passes to wide receiver Davante Adams, who had just one reception in the first half.

Going into Sunday, Adams had scored seven touchdowns in his last seven games, but he struggled to break free of San Francisco's secondary. No team has held opponents to fewer passing yards this season than the 49ers. 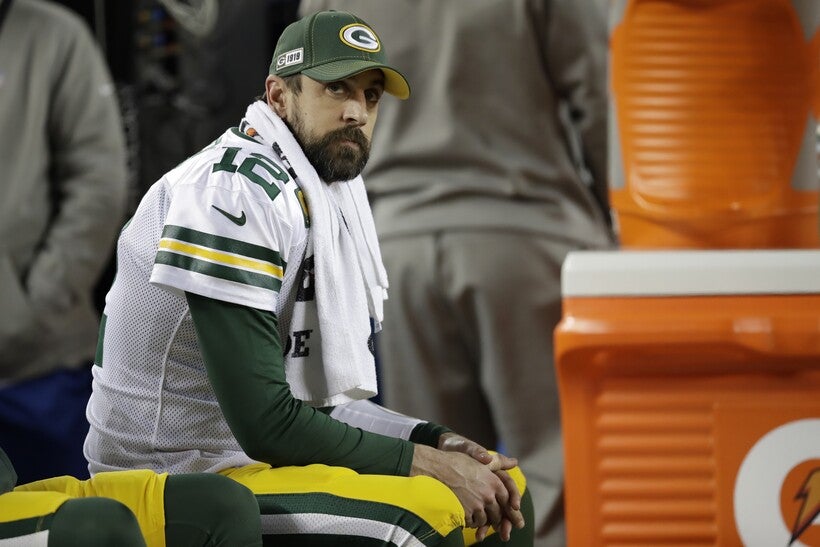 San Francisco answered quickly using the formula that worked for it all night. The 49ers gave the ball to Mostert, whose 22-yard touchdown run was his fourth of the game.

The Packers inched closer to a comeback with a touchdown to open the fourth quarter. Rodgers connected with tight end Jimmy Graham for a 43-yard play to take Green Bay to San Francisco's 1-yard line. Running Back Aaron Jones finished off the drive, but the Packers couldn't convert on their two-point attempt, bringing the score to 34-13.

Green Bay's defense finally got a stop on the ensuing drive, and the Packers added a touchdown on an 8-yard throw to rookie tight end Jace Sternberger. It was the 40th postseason touchdown pass for Rodgers, a franchise record, but it was too little too late.

Green Bay put up a better fight than when the teams met during the regular season. In November, the 49ers beat the Packers 37-8.

The Packers have lost in their last three NFC Championship appearances. All three games, including Sunday's against San Francisco, were played on the road. The Packers haven't hosted a conference title game since 2008. They won the Super Bowl in 2011 after making the playoffs as a wildcard.

In the AFC Championship, this postseason's Cinderella team, the Tennessee Titans, couldn't keep up with Kansas City’s electric offense. Led by quarterback Patrick Mahomes, the Chiefs put up 404 yards of offense and showed why they were considered Super Bowl favorites going into Sunday's contests.

Head coach Andy Reid is in his seventh season with the Chiefs. He entered the NFL as an offensive assistant for the Packers under head coach Mike Holmgren. From there, he went to Philadelphia where he served as the Eagles head coach for more than a decade. Under Reid, Philadelphia was a perennial playoff team, but the longtime coach has never won a Super Bowl.