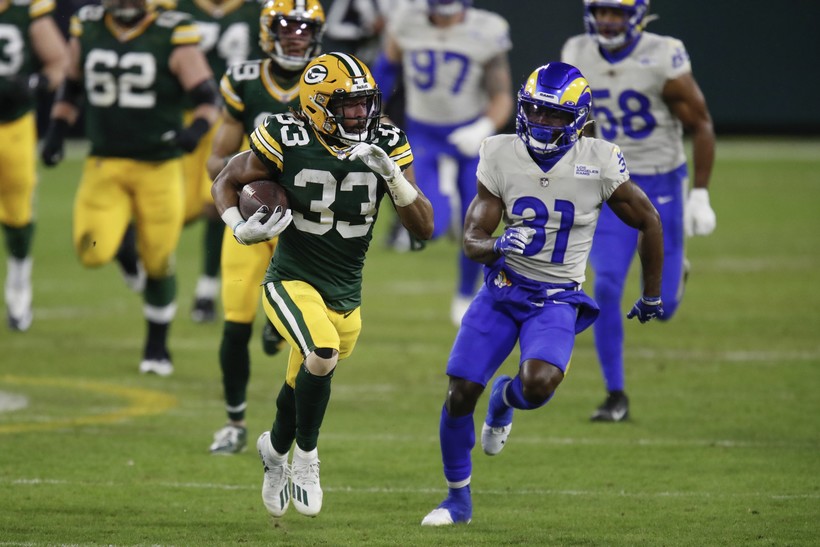 Packers Advance To NFC Title Game After Win Over Rams

For the first time in more than a decade, Lambeau Field will host the NFC Championship game.

The Green Bay Packers beat the Los Angeles Rams 32-18 on Saturday to punch their ticket to the conference title game, where they’ll face the winner of the Tampa Bay Buccaneers-New Orleans Saints game set for Sunday.

The Packers and the Rams entered Saturday’s game with the league’s top offense and defense respectively.

On their first possession, the Packers — who've scored more points this year on opening drives than any other team — used tempo to convert on third-and-7, with a 17-yard pass from quarterback Aaron Rodgers to receiver Equanimeous St. Brown. But the Rams’ defense was characteristically strong in the red zone, holding the Packers to a field goal.

Going into Saturday’s game, there were questions surrounding the Rams’ offense, led by quarterback Jared Goff, who underwent thumb surgery just weeks ago. After going three-and-out on their first drive, Goff completed back-to-back 28- and 19-yard passes, and L.A. answered with a field goal of their own.

Goff’s thumb didn’t appear to be a problem Saturday. But when it comes to quarterback play, Rodgers was not to be overshadowed — he finished the game with 296 passing yards. Despite the absence of injured left tackle David Bakhtiari, Green Bay’s offensive line stood up to L.A.’s excellent defensive front.

On their next drive, the Packers got their run game going. Green Bay took a 10-3 lead early in the second quarter, on a 1-yard touchdown pass from Rodgers to wide receiver Davante Adams.

After the Packers’ defense forced another three-and-out, Rodgers and Adams connected again on an 11-yard pass to get Green Bay to the red zone, before Rodgers scrambled into the end zone for a touchdown. The nine-play, 47-yard drive extended their lead to 16-3.

Rams running back Cam Akers, who rushed for 176 yards last week, made his presence felt late in the first half. He ran for 39 yards on the ensuing drive, and Goff threw a 4-yard touchdown pass to wide receiver Van Jefferson to close the gap.

But just before halftime, Rodgers quickly drove Green Bay’s offense down the field, and kicker Mason Crosby added a field goal, bringing the score to 19-10.

Packers running back Aaron Jones opened the third quarter with a 60-yard run, taking Green Bay to L.A.’s 15-yard line. He closed out the same drive with a 1-yard carry into the end zone to put the Packers up 25-10.

Green Bay didn’t have to punt until midway through the third quarter, but the Rams' offense responded. Goff completed six passes, including a 16-yarder to Jefferson on third-and-1. Akers capped off the drive with a touchdown on the ground. The Rams successfully went for two, thanks to a hook and ladder featuring Akers and Jefferson, bringing L.A. within seven late in the third quarter. 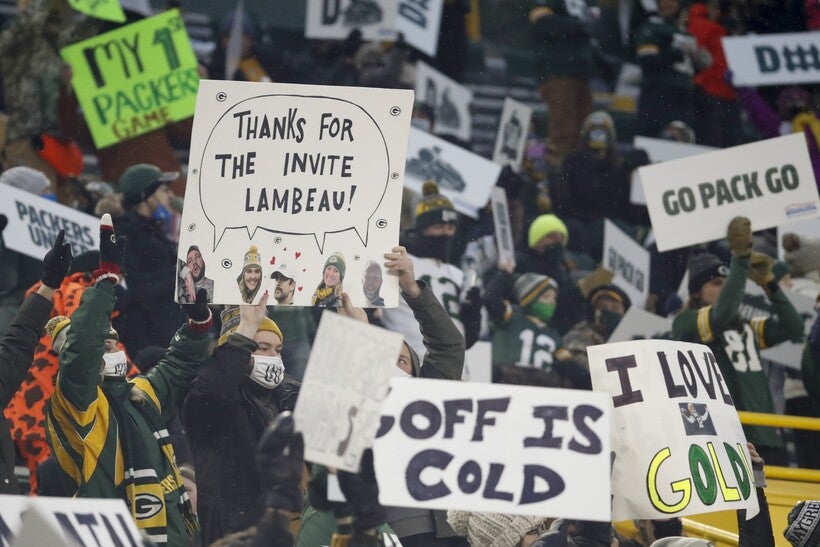 Packers' fans hold up signs during the first half of an NFL divisional playoff football game between the Green Bay Packers and the Los Angeles Rams Saturday, Jan. 16, 2021, in Green Bay, Wis. Spectators were allowed in Lambeau Field for the first time during this season. Mike Roemer/AP Photo

But the Packers weren’t done. Rodgers turned a play-action fake into a 58-yard touchdown pass to receiver Allen Lazard. It put Green Bay up 32-18 with seven minutes left in the game.

One of the most anticipated matchups in Saturday’s game was that of Adams and Rams corner Jalen Ramsey. But ultimately, Green Bay's offense by committee proved too much for the Rams. Running backs Jones, A.J. Dillon and Jamaal Williams combined for 191 yards.

The Rams might have come into the game with the league’s best defense, but the Packers’ unit had more success Saturday. Green Bay's offense had the ball for more than 36 minutes, and its defense held L.A. to 244 yards.

For the first time all season, the Packers hosted paid fans at Saturday’s game, and they made their presence felt.

About 6,000 tickets were available for season ticket holders who chose to opt in before the start of the season, according to the team. They quickly sold out. Invited health care workers and first responders also attended the game as guests of the team.

Attendees were required to sit in socially distanced pods and wear masks.

Matt LaFleur has led the Packers to the NFC Championship game in each of his first two years as head coach. No Packers head coach has ever won more games in his first two seasons, and this year isn’t over yet for Green Bay.

The top-seeded Packers had a bye last week. The Rams advanced to the Divisional Round after upsetting the Seattle Seahawks during last week’s Wild Card Round.

Super Bowl LV is set for Feb. 7 in Tampa, Florida.