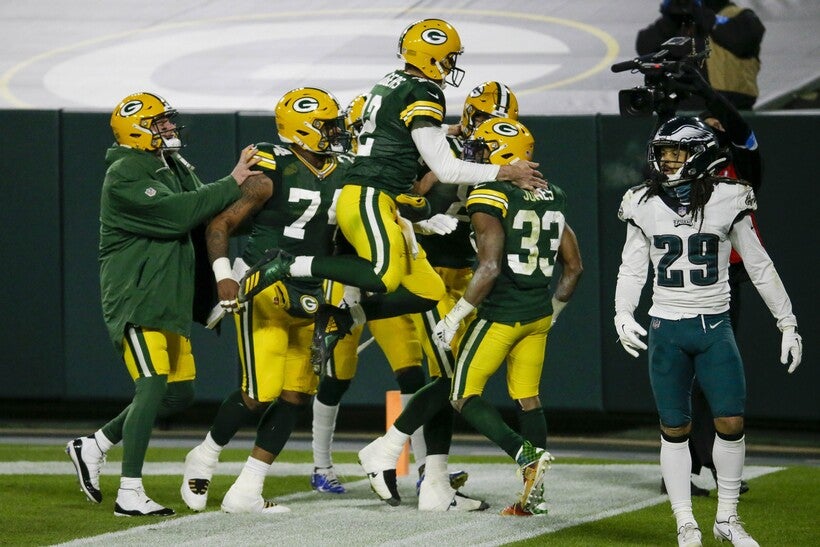 Green Bay Packers' Aaron Jones is congratulated by quarterback Aaron Rodgers (12) after running for a 77-yard touchdown during the second half of an NFL football game against the Philadelphia Eagles Sunday, Dec. 6, 2020, in Green Bay, Wis. Mike Roemer/AP Photo

NFL Playoffs: What Packers Fans Need To Know For Saturday

Kickoff Is 3:35 PM At Lambeau Field
By Megan Hart
Share:

The Green Bay Packers will host the Los Angeles Rams on Saturday with the winner advancing to the NFC Championship game.

The Packers, who earned home-field advantage throughout the playoffs with the best regular season record in the NFC, will welcome ticketed fans to Lambeau Field for the first time this season. In total, Packers President and CEO Mark Murphy said between 8,000 and 9,000 people will attend the game.

"I think that's going to help us give us that extra added home-field advantage that we need and just bring in that extra juice," said running back Aaron Jones.

The Rams have a tough defense, Jones noted. On average, they’ve held opponents to 18.5 points — fewer than any other team in the league. And no team has given up fewer yards this season than Los Angeles. But the Rams defense will be pitted against the Packers’ high-flying offense. During the regular season, it outscored all other offenses, and quarterback Aaron Rodgers led the league in touchdown passes. 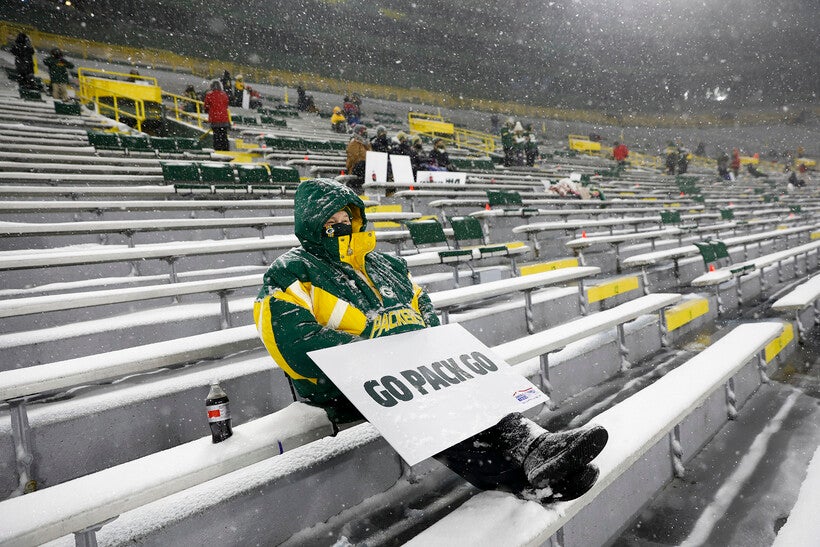 A few fans watch in Lambeau Field during the first half of an NFL football game between the Green Bay Packers and the Tennessee Titans in Green Bay, Wis., in this Sunday, Dec. 27, 2020, photo. The eight teams hosting NFL playoff games this month are more than happy to be staying home with all of comfort it brings, but the actual advantage of playing there all but disappeared during this pandemic season of mostly empty stadiums. Mike Roemer/AP Photos

Green Bay Packers: Packers wide receiver Davante Adams is having a stellar season. He leads the league in touchdown passes with 18 — only Randy Moss and Jerry Rice have tallied more in a single season (and Adams missed time with an injury). On Saturday, the battle between Adams and Rams corner Jalen Ramsey — who’s also a top player at his own position — could get interesting.

Last year, the Packers reached the NFC title game, where the San Francisco 49ers literally ran over them on the way to the Super Bowl. How well the Packers defend the run could also determine their fate this season.

Los Angeles Rams: In the Wild Card round, rookie running back Cam Akers rushed for 176 yards to help the Rams upset the Seattle Seahawks. He’ll need another big game if the Rams hope to beat the top-seeded Packers. Quarterback Jared Goff, who’s from California and played college football at Berkeley, will start for the Los Angeles. He could struggle with the weather in Green Bay, especially since he underwent thumb surgery just weeks ago.

On the other side of the ball, there’s much less uncertainty. The Rams’ defense is led by defensive tackle Aaron Donald, who was named Defensive Player of the Year two out of the last three seasons.

"The Rams have done of a hell of a job of creating turnovers, and they know how to get pressure on the quarterback, and they do a great job in the red zone. As a matter of fact, teams, as of late, have had a hard time getting to the red zone, so I just think we’re going to have to execute one play at a time," Packers head coach Matt Lafleur said.

What’s Next: The winner of Saturday’s game will advance to the NFC title game. If it’s the Packers, the game will take place at Lambeau Field, marking the first time the stadium has hosted a conference championship since 2007.

On Sunday, the New Orleans Saints, led by quarterback Drew Brees, will host the Tampa Bay Buccaneers, led by quarterback Tom Brady, to determine their opponent. Both Brees and Brady are in their 40s. Along with Rodgers, 37, the remaining NFC teams feature three of the most accomplished quarterbacks in NFL history.