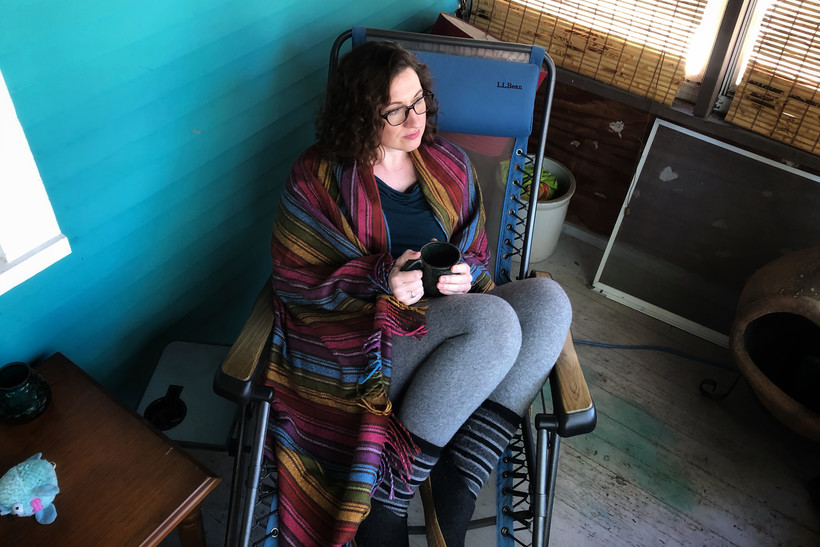 Emergency room nurse Mariah Clark reflects on the pandemic on her porch in Madison, Wis. Photo courtesy of Mariah Clark

Outbreak Wisconsin: 'This Pandemic Has Yet To Declare Itself'

ER Nurse Reflects On Fight Against Coronavirus As State Prepares To Reopen
By Bram Sable-Smith
Share:

As the rate of positive COVID-19 tests begins to drop in Wisconsin, momentum is growing to reopen the state. Gov. Tony Evers has issued guidelines for businesses to reopen. The University of Wisconsin System announced plans to test all students, faculty and staff in hopes of reopening in the fall. Even the Green Bay Packers are preparing for what they hope will be a normal NFL season.

But frontline health care workers like Mariah Clark remain in the thick of things. Clark is a nurse in the emergency department at UW Health in Madison. Early one morning in late April, she reflected on the dichotomy of the success the state has had flattening the curve of infections, with the plans to reopen.

She’d just gotten off of three straight days working the 3 p.m. to 3:30 a.m. shift at the hospital and sat on her front porch where she could hear the morning songbirds of spring.

"I think that’s part of humanity — not dealing well with the feeling of helplessness and futility," Clark reflected.

"What we’re doing right now isn't futile, but it can feel that way because you can’t necessarily see the progress unless you’re a bit of a data wonk," Clark said.

Clark described a recent text conversation she had with a friend in New York after the friend mentioned the "second or third" ambulance outside his apartment in a single day. The friend didn’t know if it was someone he knew since he hadn’t gone outside.

"How many people they take away in ambulances recover?" the friend replied.

Clark explained it depended on why the ambulance was called, essentially.

"Up until COVID, I'd say most people I picked up in an ambulance recovered," said Clark who is also an emergency medical technician. "But now I don't know."

"I knew he was in a darker place," Clark said of her friend.

"A lot of this pandemic has yet to declare itself," Clark said. "In medical parlance, a patient declares themselves: They either get well enough to be discharged or get bad enough to need (to be) upgraded in their level of care."

She added: "I don't know if we're going to see it get better right away — with this long lower sloping curve (of infections) — (or) if that peak is just going to come later, when things open back up," Clark said. "I don't know."

"But right now, I feel we're having an effect. There’s a good fighting chance."

Editor's note: Outbreak Wisconsin is a collaborative project by Wisconsin Watch and WPR following Wisconsin residents as they navigate life during the coronavirus pandemic. The residents will contribute diary entries, in the form of audio, video, text, drawings and photos of themselves, their families and personal and professional lives. That content will be supplemented by interviews and digital content to provide a full picture of how the pandemic is affecting all aspects of life in Wisconsin.