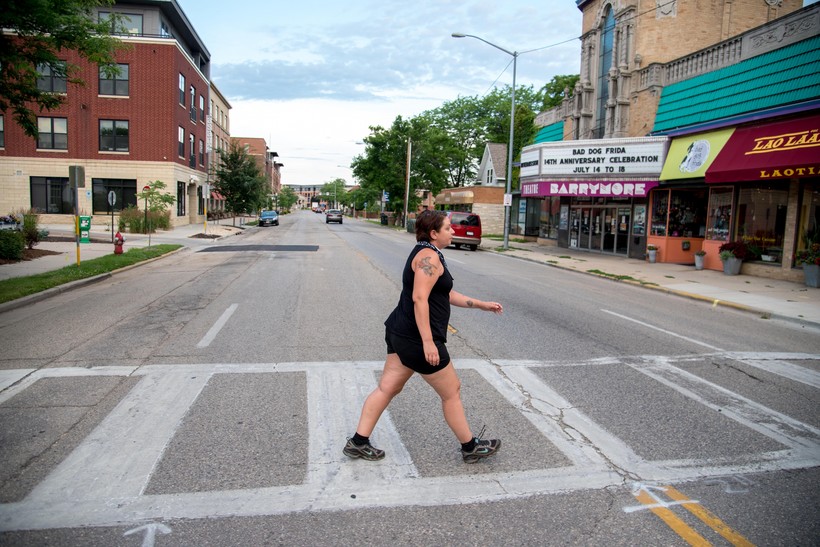 Amy Moreland is seen on her morning walk near her home on the East side of Madison, Wis., on July 14, 2020. Moreland said that the walks help to get her out of bed and keep up a routine, as she is out of work and living alone during the COVID-19 pandemic. Will Cioci/WisconsinWatch

Outbreak Wisconsin: 'It Doesn't Look Like There's An End In Sight To This'

Madison bartender Amy Moreland has been out of work since mid-March. She immediately applied for state unemployment insurance and eventually started receiving an extra $600 per week from the federal CARES Act stimulus package — atop her $114 per week in state aid.

This federal benefit is set to expire at the end of this month, leaving Moreland and many other jobless Wisconsinites unsure about what’s next.

Moreland initially planned to put almost all of her unemployment aid toward rent and food. Then her air conditioner broke in early July, prompting a search on Amazon and questions about whether she could afford a new one.

"With my unemployment running out so soon, and with no idea whether there's a job in sight, it seems like a bad idea," she said. "But also, while I'm sweating with all the fans in my living room, it seems like a great idea."

Moreland decided not to buy the air conditioner. She is among millions of Americans who have received the extra federal money, and she considers it a lifeline. Contemplating the next few months without that help is a terrifying proposition.

"I'm really scared," she said. "It doesn't look like there's an end in sight to this, or at least not for the summer."

As Congress returns to session this week, lawmakers will debate whether to extend the benefit. In May, the Democratic-controlled U.S. House passed a $3 trillion coronavirus aid package that would extend the extra $600 payments through January 2021. Senate Republicans have said they oppose this bill.

In an interview on Wisconsin Public Radio’s "The Morning Show," U.S. Sen. Ron Johnson, an Oshkosh Republican, said he would oppose authorizing "even a dime more" of economic stimulus until certain issues with the original legislation were resolved and unspent funds were disbursed.

Any changes to federal unemployment aid will take time to program into the Department of Workforce Development’s 1970s-era computer technology and could add delays to an already backlogged system — particularly if Congress acts close to or after the aid program’s expiration date, said Emily Savard, a program and policy analyst in the agency’s Unemployment Insurance Division.

"With our system it does cause stress, because our system is so old and archaic, and it is hard to program, and depending what happens, again we'll need to prioritize what needs to be programmed and how to do it," Savard said.

Moreland will continue to receive regular state unemployment insurance should the extra federal funds vanish — $114 per week after taxes, not nearly enough to pay her rent. But that, too, will eventually run out.

Wisconsin allows those who qualify to collect regular unemployment aid for 26 weeks, and a pair of federal stimulus programs would allow Moreland and similarly situated Wisconsinites to apply for extensions once they exhaust their regular benefits: Pandemic Emergency Unemployment Compensation (PEUC) and Extended Benefits (EB). Moreland could get 13 extra weeks of regular benefits through PEUC, and 13 more after those benefits ran out. But she can’t apply for either of those programs until exhausting benefits under each previous step.

DWD said it distributed PEUC benefits to 8,435 people as of July 20, and it had yet to add the EB program to its computer system.

More than anything, Moreland wishes to safely return to her former job. The bar where she worked reopened in June — only to close the next day as COVID-19 cases spiked in Dane County.

"I want things to open back up, because I want to go back to my life and make money and, you know, have a life outside of my home. But I also don't want to do that too quickly and have everyone get sick," she said.

Editor's note: This story is a part of Outbreak Wisconsin, a collaborative project by Wisconsin Watch and WPR, following Wisconsin residents as they navigate life during the coronavirus pandemic. The residents will contribute diary entries, in the form of audio, video, text, drawings and photos of themselves, their families and personal and professional lives. That content will be supplemented by interviews and digital content to provide a full picture of how the pandemic is affecting all aspects of life in Wisconsin.