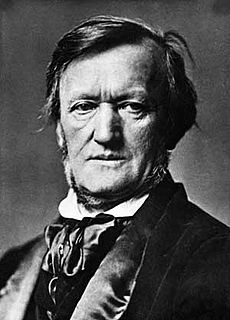 Out of the Body

Some people are said to have the ability to see themselves as if from a distance. Richard Wagner was one of them. He delivered an address at a ceremony marking the relocation of the remains of composer Carl Maria von Weber from London to Dresden in December 1844. In his autobiography, he wrote of a strange sensation that overcame him.

On the occasion I had a strange experience when for the first time in my life I had to deliver a solemn public speech. Since then I have always spoken extemporaneously, but since this was my first appearance as an orator, I had written out the speech and carefully memorized it.

Since I was completely under the influence of my subject, I had such confidence in my memory that it never occurred to me to make any notes…

I began my speech in a clear and full voice, but suddenly the sound of my own words and their particular intonation had such an effect upon me that, carried away as I was by my own thoughts, I imagined I was seeing  as well as hearing myself speaking before the breathless multitude.

While I appeared that way to myself, I remained in a sort of trance, during which I seemed to be waiting for something to happen, and I felt like quite a different person from the man who was supposed to be standing there speaking.

It was neither nervousness nor absent-mindedness on my part. Only at the end of one sentence there was such a long pause that those who saw me standing there must have wondered what in the world to think of me.

Finally my own silence and the stillness around me reminded me that I was not there to listen, but to speak. I continued my remarks and spoke with such fluency that the celebrated actor, Emil Devrient, assured me that, apart from the solemnity of the occasion, he had been quite impressed just from the standpoint of a dramatic orator.