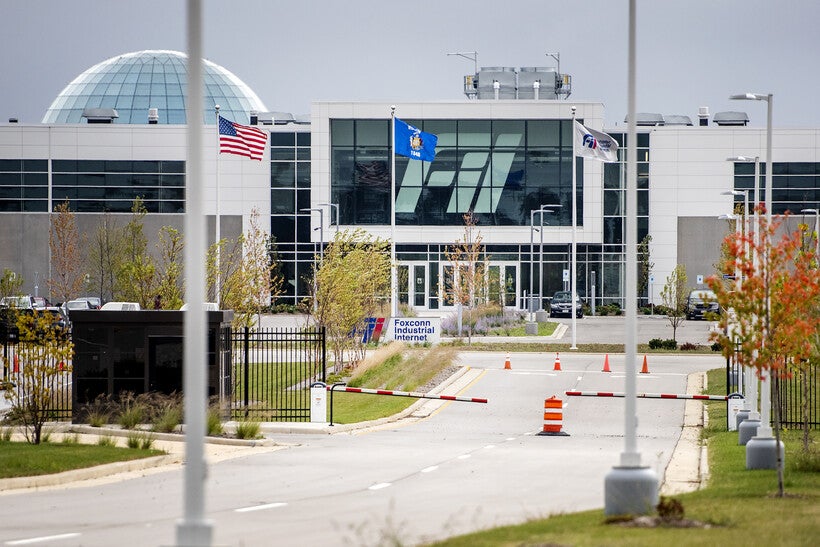 A parking lot is blocked off at the Foxconn campus Wednesday, Oct. 6, 2021, in Mount Pleasant, Wis. Angela Major/WPR

Officials hope to find a new company for Foxconn site

The Racine County Board and the Mount Pleasant Village Board met Tuesday for the first public update on the Foxconn project since 2019.

Jim Paetsch is the executive director of the Milwaukee 7, a regional economic development group in southeastern Wisconsin. The group was part of the effort to recruit Foxconn to Wisconsin in 2017, he said.

With the site still largely vacant, the group was also involved in recruiting the semiconductor manufacturer Intel to the Foxconn site last year. In December, that company chose a site in Ohio instead.

"The really good news, I think, for Mount Pleasant and Racine County is we have a great site," he said. "And we're looking to pursue more of these opportunities in the months to come"

Members of the public were invited to submit questions, but they were not answered.

The questions were read aloud during the regular Racine County Board meeting, which happened after the joint meeting.  According to Gallaher, the presenters had already left at that point and the questions remained unanswered.

"It was just a formality," Gallaher said. "There is no transparency."