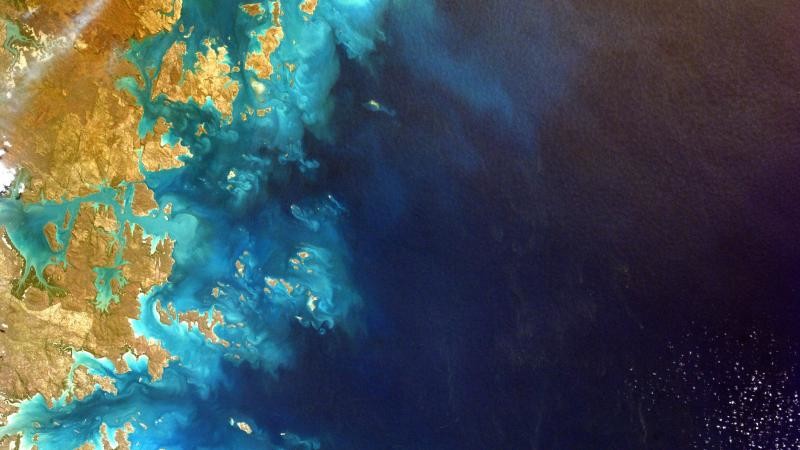 Books Examine A Dark Future Rooted In Themes Of Our Present Moment
By Steve Paulson
Share:

Every so often, a science fiction or fantasy series breaks out of the genre it's boxed into and turns into a wider cultural phenomenon.

Such is the case with N.K. Jemisin's "Broken Earth" trilogy, which has won the prestigious Hugo Award the past two years in a row — the first time that's happened since the mid-1980s. It has also sparked a backlash among some conservative science fiction writers and fans.

As the rare Black woman who has become a marquee name in science fiction and fantasy, Jemisin is a pioneer in a field that has been dominated by white men. She is also outspoken about her political concerns, which she has incorporated into her complex fictional world. She spoke to Steve Paulson for "To The Best Of Our Knowledge" in 2017.

These transcript highlights have been edited for clarity and length.

On the real-world origins of "The Broken Earth" trilogy

N.K. Jemisin: As a Black woman living in modern day America, I have lots of questions about validity and exploitation. Black Lives Matter and this book were born out of the same anger and pain.

I was sitting at home and writing parts of this book as I was watching Ferguson unfold on Twitter. We saw again and again the names of people who had been extrajudicially murdered. I drew inspiration from a lot of different oppressive situations. One of the protagonists has lived her life as a woman in hiding, effectively similar to a closeted, queer person. I'm interested in systems that are exploitative towards oppressed groups for specific reasons.

This looks a lot like our own world except periodically — every 200 or 300 years — there is a seismic event powerful enough to kick off something that the locals call a "Fifth Season." It's some kind of massive worldwide disaster that often comes paired with famine and the breakdown of society. So, this is a world where, in some ways, the apocalypse happens again and again. Most of the time they're generally democratic and capitalist, but they have rules set up so that when bad things happen, every community breaks into its own little fiefdom and becomes authoritarian and they kick out anybody they deem useless.

NKJ: Orogenes are a group of people who are born with the natural ability to impact seismic events with their minds. Not only can they sense earthquakes coming, they can stop them and start them. When they've practiced their skill enough, they can literally reshape the entire face of the planet.

The society abounds with stories of what happens when orogenes are allowed to have lives and children. No one wants that. If they're outed and people realize what they are, then lynch mobs form because they're considered too dangerous. I mean, it's similar to the hysterical overreaction to people who had AIDS. The assumption that just being in the same room and breathing the same air was somehow dangerous.

In my world, people understand that orogenes often have children that are orogenes. So you want to make sure you get that out of your community. If they're found as children and there's enough time before a mob forms, the people of that village can summon someone called a Guardian who will come along and take that kid off to a training place called the Fulcrum. In this case, it takes the form of a kind of evil Hogwarts. They can't leave until they're fully trained and then they are let out only to do quick missions. Then they come back home quickly before people get mad that they're there.

On dealing with the political backlash

NKJ: What we call the alt-right — Nazis — have practiced in certain smaller spheres of life before moving into politics. We've seen variations on the same thing happen in the comic book world and the video game world. It was called Gamergate there.

In science fiction and fantasy, it's "the Puppies." This is one of the battlefronts on which they've decided to operate because they realize that you've got to control ideas, you've got to control people's ability to think about the future. One thing I often talk about as a woman of color in science fiction and fantasy is the fact that until relatively recently, you just didn't see a lot of Black people — or Black women especially — in the future. You saw endless iterations of the future that looked a lot like middle America, full of mostly straight, white guys and a smattering of women, all young and nubile and very few of anything else.

I struggle to envision a society that's truly free of bigotry because that's all I've ever known. It's such a revolutionary and difficult thought that I'm going to have to try to figure out a way to see past the present and into a better future because somebody has to do it. And there are a lot of people out there who are imagining a much worse future. So those of us who are tasked with the job of imagining the future have some work ahead of us. But I've struggled to do it. I don't know if I can imagine that right now.