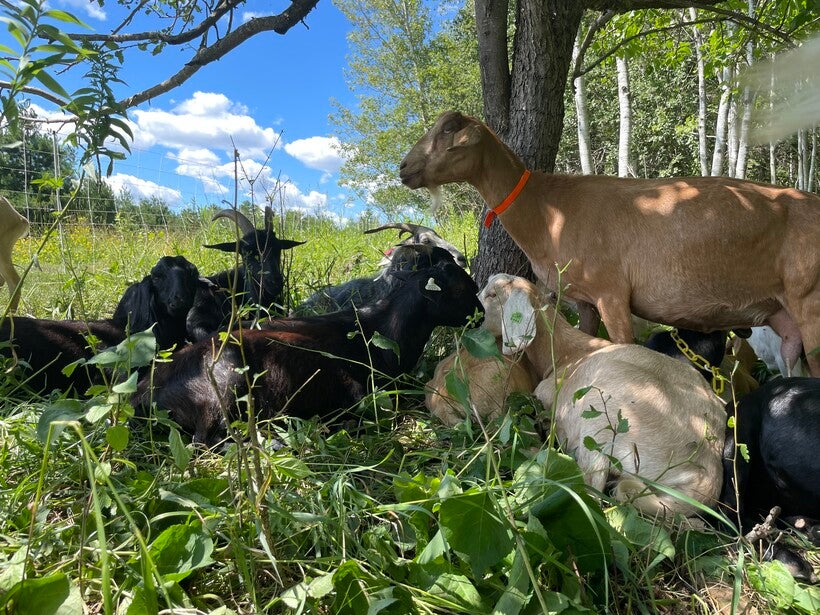 Not kidding around: Goats beat back buckthorn for first time at Brule River State Forest

What connection could possibly exist between 1990s pop icons and Wisconsin’s efforts to control invasive species?

Jake Reina Williams and his wife Brigid named their goats after celebrities Mary Kate and Ashley Olsen, along with Britney Spears, but these goats aren't angling for the limelight. Instead, they’re chowing down on buckthorn in the Brule River State Forest. It’s part of a new effort by the Wisconsin Department of Natural Resources to control the invasive species in the forest for the first time.

"We've had a problem with buckthorn for a long time on the property, and what we're trying to do is manage the invasive plants so that we can promote native trees and plant growth and not inhibit their regeneration," said Dan Kephart, the DNR’s property manager for the forest.

Buckthorn is a small tree or shrub that grows in shady areas of the forest, crowding out native trees like white pine, ash and balsam. Now, the DNR is partnering with the couple, who own Regenerative Ruminants in Poplar. The couple’s goats started grazing on the invasive plant in May amid the forest’s red pine, spruce and alder trees. The total cost of the project is $7,500, and the goats have rotated through the site several times this summer.

Now, the goats are back, feeding on everything they can reach. The couple brings in portable electric fencing to pen in the goats as they feed on invasive plants across small portions of the 5-acre project.

Jake said Brittany is the lady in charge of their roughly 35 goats. 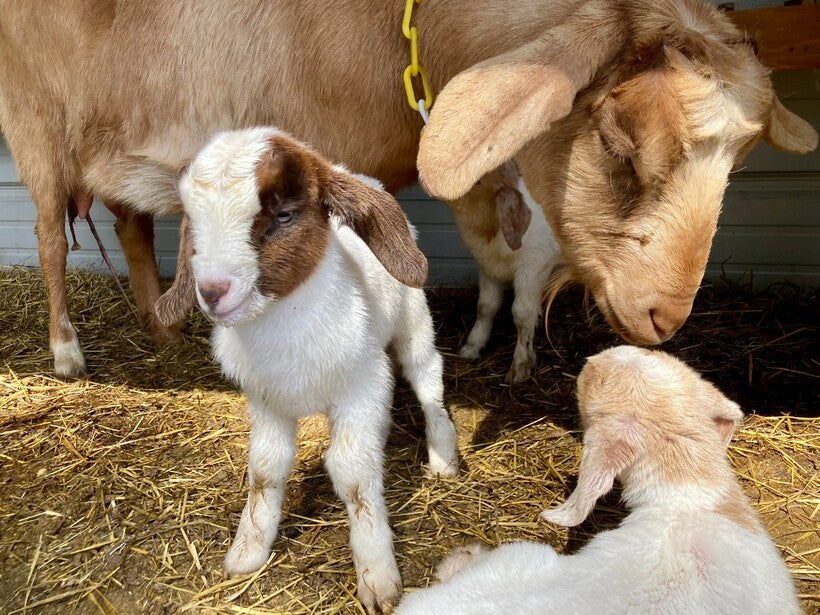 "She’s the biggest," Jake said. "When they've eaten most everything they can reach, they'll start to push over small trees, and so Brittany will go in and push over a tree. Then, all the other littler goats will come and swarm it and eat all the leaves off of it."

He said the goats are good at battling buckthorn because of their tendency to eat up — literally.

"If we were to put sheep in there, the sheep would focus on everything that's low, the grasses, the shorter forbs (herbaceous flowering plants)," Jake said. "Whereas when you put a goat into a mixed ecosystem, the first thing they're going to want to do is eat all the shrubs and brushes, which is generally where the buckthorn exists."

The DNR has used herbicides and mowing in the past to control buckthorn in the forest, but the agency is interested in alternatives to chemical treatment.

"We're always being asked to reduce the amount of pesticide that we use. We want the forest to be able to regenerate our native species. If invasive species get in the way, it makes it very difficult to do so," said Mary Bartkowiak, the DNR's invasive plant coordinator, in a statement. "If the invasives out compete all of the native vegetation, we won't have the sugar maples, red pines or the white pines because they would be overtopped by the invasives."

It's not the first state property where goats have been used to graze on invasive plants. The DNR's Kephart said goats also mowed down buckthorn on Governor Knowles State Forest, which stretches along the St. Croix National Scenic Riverway. The agency has also used the animals to control invasive species at Heritage Hill State Park in Green Bay. Parks in Madison and Wausau have also used goats to manage invasive plants. 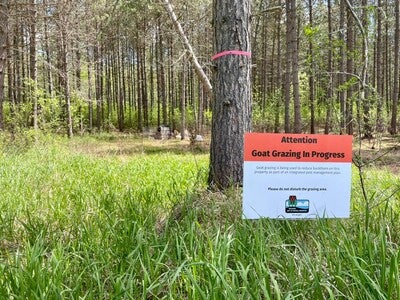 After this round of grazing, Brittany and her crew will be brought back to hit the buckthorn one more time next spring. Kephart said the agency will evaluate how effective the herd is at reducing invasive species over time compared to other methods.

The effectiveness of methods like goats, mowing and herbicides to control invasive species like buckthorn and bush honeysuckle is something that University of Wisconsin-Madison researchers are studying. It’s part of a multi-year project that’s underway at two plots in Sun Prairie and Prairie du Sac.

Researchers are examining how each of those management techniques work when used alone or together, according to Mark Renz, professor and extension specialist in UW-Madison’s agronomy department. He noted a study by researchers at Purdue University in Indiana previously found goat grazing could reduce invasive species over the span of five years. 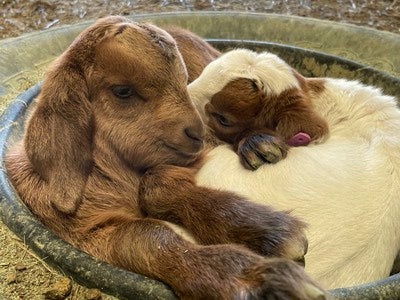 "So it works, it just takes time," Renz said. "And the challenge as a land manager like the Brule Forest is trying to figure out is it worth it to do that approach with goats or is an integrated approach better or what works best for their situation?"

Renz said mowing works well to control invasive buckthorn, but the plants are bound to sprout again. Meanwhile, herbicides will kill invasive species, but they may also kill other surrounding plants that aren’t targeted for removal.

Preliminary observations show an integrated approach that uses a mix of options to control invasive species can limit damage to other plants, said Renz. Each of the management techniques are expensive, ranging from hundreds to $1,000 per acre. Researchers are still evaluating the costs of those methods and hope to release findings next year.

In the meantime, Jake and Brigid hope their goats will knock the buckthorn back enough to allow native trees to take hold in the Brule River State Forest.