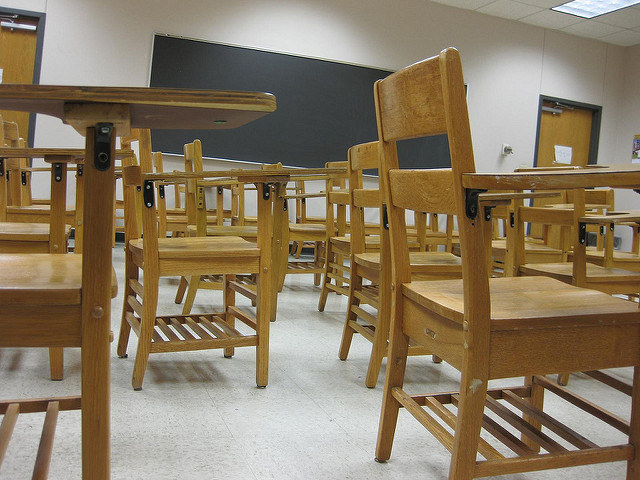 A public school district in northwestern Wisconsin could eventually close if a referendum to provide more revenue is rejected by voters in Tuesday's election.

Voters in the Lake Holcombe School District, in rural Chippewa and Rusk counties, are being asked by the district to approve a $2 million referendum for operating expenses.

The Lake Holcombe School District runs one K-12 school, around 300 students and 45 employees. It's a rural district and a majority of students come from lower income families.

School Board President Corey Grape grew up here and now his children attend the Lake Holcombe School. But he said that could change if voters don’t approve a referendum seeking $675,000 from voters each year through 2019 for a total of $2 million.

"Basically, we’re in a situation where there’s not enough revenue to even keep the doors open," said Grape. "So, with the revenue cap and where we’re at, we’re kind of in a perfect storm in terms of funding."

That cap that he's talking about is a 23-year-old limit that said a school district can only raise a certain amount of money per student through state aid and property taxes. Lake Holcombe is a popular vacation spot with lots of expensive lakefront homes but declining enrollment means the school district can't raise property taxes without voter approval. State records show Lake Holcombe gets one-tenth the state aid of some of its neighbors.

Superintendent Jeff Mastin said the formula is failing them.

"It just seems to be unfair that we have such high property value that we can't get any state aid but the property value is capped that we can’t increase it to a point where we can sustain ourselves without going to referendum," Mastin said.

If voters reject the Lake Holcombe District’s referendum, Board President Grape said they face tough choices. They could cut educational programming or merge with a neighboring district. But Grape said those options would hurt students.

"So, we believe if it doesn’t pass, with dissolution, it would be more educational friendly, more family friendly and more fiscally responsible," Grape said.

Department of Public Instruction finance director Bob Soldner said when a school board passes a resolution to dissolve it's the last vote they'll take.

"So, the law says once a board votes to dissolve a state panel will be appointed by the superintendent of public instruction, in this case Tony Evers, and they then become the panel that does public hearings, looks at the research and makes a determination whether they agree with the local board decision to dissolve that particular school district," Soldner said.

It’s been 25 years since a school district was completely dissolved.  In the last 10 years two districts in far northeastern Wisconsin began the process but in both cases referendums eventually passed sparing the districts.

The Lake Holcombe School lies within state Sen. Terry Moulton's, R-Chippewa Falls, district. He said the school funding formula has left rural districts struggling but legislators are leery about changing it because money could shift from schools in their districts to other parts of the state, but there are special circumstances.

"I think when you hear talk of a district like Holcombe having to dissolve I think that starts raising some eyebrows," Moulton said. "Public education is still very important and we can’t just ignore if some of these districts are going to close."

At the Lake Holcombe Café, just down the street from the school some diners don’t like the threat of closing the district. Café owner Jane Skaare said she’s 1,000 percent for the school to stay.

"Why? Because number one it's jobs, number two we have an awesome schools, awesome music department, awesome FFA, the curriculum is good, everything is good," said Skaare.

Voters will decide Tuesday whether to support the $2 million referendum. If not, the school board has signaled it could consider dissolution at its meeting later this month.