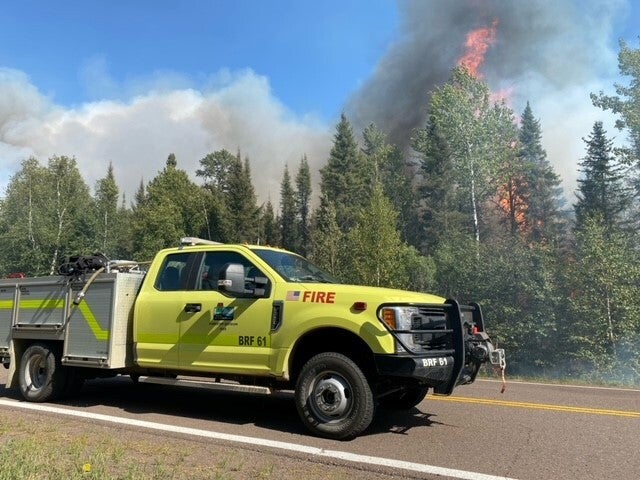 Wildfires in the Boundary Waters Canoe Area Wilderness are affecting air quality across northern Minnesota and Wisconsin, impacting health and comfort of people in the area.

That includes Karen Eagle, a senior meteorologist with the National Weather Service office in Duluth, who is tracking the air quality situation. Eagle also has asthma, and she said heading to work Tuesday morning was not easy.

"I was overwhelmed with the smoke when I walked out this morning. It took my breath away, literally," Eagle said.

The Greenwood Fire, the main wildfire affecting the Boundary Waters, doubled in size Monday evening and is now estimated to cover more than 19,000 acres, Eagle said.

According to federal air quality maps, all of Douglas County in northwestern Wisconsin had an "unhealthy" air quality rating on Tuesday, as well as northern Burnett and Washburn counties.

Eagle said the region around Duluth and Superior also experienced a weather phenomenon called an inversion, where warm air at high altitudes holds smoke and pollution at the surface.

"It’s trapping all of the smoke that’s come down from the Greenwood fires in places like Superior and Duluth and (communities) close to that area have had a really strong smell of smoke," Eagle said.

Eagle expects the inversion to dissipate Tuesday afternoon as the air mixes again. A line of rain showers and thunderstorms moving through the area could also help dissipate the smoke and change the wind direction north toward Canada.

She said the rain could also help dampen the wildfires that continue to burn mostly uncontained across the Boundary Waters.

"On the opposite hand, if that precipitation has thunder in it with lightning, then that could spark some more fires. So it's kind of a double-edged sword," Eagle said.

She encouraged Superior area residents with breathing issues or other medical concerns to remain indoors as much as possible.

"I know a lot of people in this area don't have air conditioners, but I highly recommend to keep the windows shut. That way the air won't be able to circulate from the outside in," Eagle said. "And mask up if they can. I know that sounds kind of weird, but I’m actually sitting in the office right now with a mask on and it's been helpful."

Catherine Koel, a wildfire prevention specialist for the Wisconsin Department of Natural Resources, said her agency continues to send engines and firefighters to help their counterparts in Minnesota, as well as personnel to help with fire management.

Koele said the state does not currently have any resources helping with the Horne Fire on Michigan’s Isle Royale in northern Lake Superior. She said some personnel are in what’s called "pre-position", where they could respond as needed.

"There’s a lot of activity nationally on the wildfire scene right now," Koele said. "We share resources pretty regularly. It’s not uncommon for us to send resources out of state to assist those agencies."

Koele said the northern two-thirds of the state has experienced smoke and air quality impacts from wildfires in both Minnesota and Canada this summer.

She said the upper Midwest’s fire seasons are usually in the spring after the snow melt and in the fall when there are more dried leaves on the ground. But she said seeing a dry year with more wildfires isn’t unusual over the long term.

"If you look at kind of a 30-year average of a typical wildfire season, it's not really that uncommon to see extended drought situations," Koele said. "(This year’s activity) does feel abnormal, but if you look at the long term statistics over 30, 40 years, it is somewhat normal."