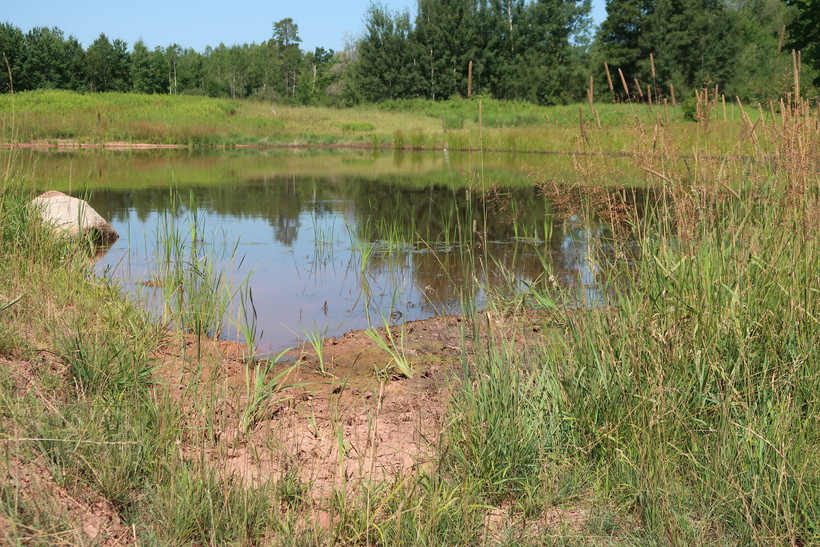 Tom Gazdik installed wetland ponds like this one on his property last year to help slow the flow of stormwater running off his property into North Fish Creek.

Northern Wisconsin Project Seeks To 'Slow The Flow' Of Stormwater

Northern Wisconsin has dealt with three floods in the last six years that caused millions of dollars in damage resulting in federal disaster declarations. The region is seeing more frequent, intense rainfalls.

For the last several years, local, state and federal partners have been trying to find ways to slow the flow of stormwater running off the landscape, as well as reduce the amount of sediment washing into Lake Superior.

One way the group of stakeholders is trying to solve stormwater runoff is through wetland ponds.

Not far from the washout caused by June flooding on U.S. Highway 2, Tom Gazdik led the way to a roughly half-acre pond on the back of his property near Ino, west of Ashland. His grandfather came here to farm in the early 1900s.

"This was all dairy farm, so the cattle would graze in the forest. There would be trails all over," he said. "It was ideal for raising cattle because there was a lot of water available."

But, the water also made it difficult to farm and many producers gave up growing crops or hay. Gazdik’s father gave it up long ago. He said that’s one reason why the spot was ideal for installing a wetland pond.

"I grew up playing back here in all the springs and all that stuff. I knew that this was ideal for a pond, and I always wanted to have some up here," said Gazdik. "When I heard about this project, I’m going, 'Oh my God. This is perfect.'"

The project Gazdik is referring to is one Northland College in Ashland is leading.

The college is working with Bayfield County landowners like Gazdik to slow the flow of runoff from heavy rains using money from the Great Lakes Restoration Initiative. Tom Gazdik, left, and Bayfield County's Travis Tulowitzky talk about the wetland ponds that were installed to slow the flow of water running off his property. The four ponds cost roughly $24,000 to build. Danielle Kaeding/WPR

But it's not always easy to get landowners on board, said Travis Tulowitzky, a conservation technician with Bayfield County Land and Water who is also involved in the project.

So far, the county has worked with three landowners to install eight wetland basins, four of those ponds are on Gazdik's property and were installed last year.

"Farmers, for the most part, do not want to give up their field. That’s their livelihood," said Tulowitzky. "If we can find areas on the landscape that are kind of in that transition — it's not completely forested."

Tulowitzky said Gazdik's property is ideal for these ponds because it’s open grassland with a lot of water draining toward North Fish Creek. More than 300 acres drain to a single wetland pond. He said they’re building them to withstand 100-year floods.

A 100-year flood has a 1 percent chance of happening in any given year.

"Because of the tendency of our storms lately, we are pushing most everything for a 100-year, at least," he said. Tom Gazdik and Bayfield County's Travis Tulowitzky stand by a wetland pond that was installed on Gazdik's property. Danielle Kaeding/WPR

Located nearby one of Gazdik’s four ponds is a rock-lined spillway. If the pond overflows, the rocks spread out and slow down water heading toward North Fish Creek. When heavy rains hit in June, Gazdik admits he was worried about whether his ponds would hold.

"I was concerned, but everything worked out great," said Gazdik.

David and Irene Walter also installed a pond on their 80 acres of land in Moquah, west of Ashland.

"We’re interested in slowing down the water going to the lake," David Walter said, referring to Lake Superior. "We know that erosion’s a natural part of it, but you can slow it down so it helps with that. We like the habitat it provides. We’ve got ducks that are coming to the ponds ... We’re just outdoors people and we enjoy seeing what nature can be done. If we can help out a little, that’s why we put it in."

The Northland College project with landowners stems from previous studies of North Fish Creek by the U.S. Geological Survey.

Researchers found North Fish Creek is prone to flash floods and erosion, which is due in part to the region’s clay soils and sandy deposits leftover from receding glaciers. Heavy logging and farming at the turn of the 20th century made it even worse, said Faith Fitzpatrick, research hydrologist with the U.S. Geological Survey at the Wisconsin Water Science Center in Middleton.

"We see certain sections were always eroding, but then the rate maybe doubled or maybe was even higher than that when the land was cleared after the original clear-cut logging," Fitzpatrick said.

Fitzpatrick was a lead author on a 1999 study of North Fish Creek that found returning areas to forest and adding detention basins, like the wetland ponds, would decrease flood peaks and related erosion.

Hudson, of Northland College, said they want to reduce human impacts on the landscape through the project.

"With changing climate and stuff like that, we want to promote a system that’s more resilient if we’re going to have more of these floods in the future," Hudson said.

As part of that, Hudson said they’re also working with a stream restoration firm to reduce erosion in North Fish Creek. About two-thirds of the sediment that ends up in Chequamegon Bay on Lake Superior comes from about 15 to 20 large eroding banks. As project partner, hydraulic engineer Ben Lee with the firm Inter-Fluve is working on designing and installing a logjam at an eroding bank on state-owned property in the North Fish Creek watershed.

"Historically, the mature old-growth forest in the area were very important in providing flood-resiliency and mitigating erosion," Lee said. "For example, if you have a large flood event in that type of system, it would have potentially initiated some bank erosion. You’d have very large trees falling into the river, which would rack up more debris. This would give some negative feedback on the erosion process."

The college has been working with a mix of local, state and federal partners on the project, including Michele Wheeler, Lake Superior coordinator with the Wisconsin Department of Natural Resources.

Wheeler said North Fish Creek is part of the South Shore of Lake Superior Fish and Wildlife Area, which was created around 25 years ago to preserve a large self-sustaining fishery. Large inputs of sediment into the stream and Chequamegon Bay threaten to harm that resource.

The intent is to demonstrate whether bank-stabilization projects like this one may be successful in reducing the amount of sediment in the creek.

Hudson said he hopes projects upstream with landowners and downstream in the creek will improve flood resilience, fish habitats and water quality.

"It’s helping with a public resource need in terms of improving Fish Creek and reducing sediment to the bay, which affects the city of Ashland’s drinking water and all the recreation and boating and charter fishing and just the people living in the Ashland area," Hudson said.

Hudson said a little prevention might cut back on the threat flood waters pose to their quality of life.