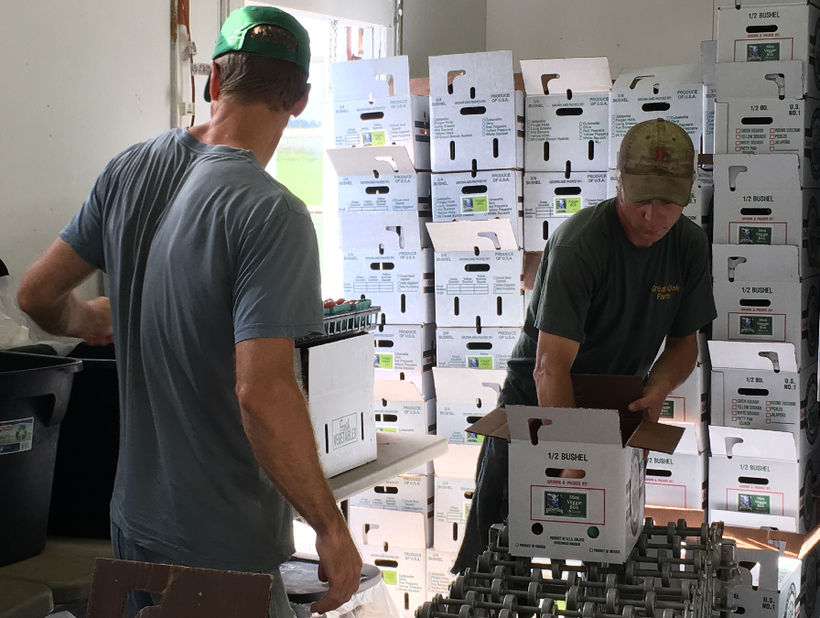 Wisconsin Among Top 5 States Nationwide For Sales Direct From The Farm
By Danielle Kaeding
Share:

On a recent Wednesday morning in Ashland, Wisconsin, Chris Duke grabs a tomato the size of a grapefruit to pack in a box full of vegetables.

The owner of Great Oak Farm in Mason forms an assembly line with three other area farmers, packing boxes with lettuce, cucumbers and greens. Every week, the food is picked the night before and delivered by the end of the next day to drop-off points, including churches, grocery stores and food cooperatives in different cities.

"That's like as fresh as you can get it unless you came to the farm and picked it yourself," Duke said. Wisconsin was among the top five states in the United States that made the most food sales directly from farms in 2015, according to the U.S. Department of Agriculture's first ever local food survey.

More than 4,600 Wisconsin farms sold around $431 million worth of food directly to consumers, retailers and institutions. In northern Wisconsin, farmers have been working together to bring local food to markets.

Duke and more than 20 farms in Ashland and Bayfield counties are part of the Bayfield Foods Cooperative, which runs the Lake Superior CSA. The CSA provides vegetable, fruit and meat boxes directly to its members. The cooperative also has a wholesale program where they deliver food to restaurants and stores across the Twin Ports and north central Wisconsin.

When they sell as a co-op, Duke said the farms are under less pressure to meet every demand from consumers, retailers and institutions.

"If you have a wholesale buyer and they’re like, 'OK, we want a whole pallet of tomatoes every week,' and your tomatoes are three weeks late because it’s cold out, (then) that means you just lost three weeks of income. That’s really tough to climb out of early in the season," Duke said. "The other nice thing about this CSA is it’s not just me. It’s not just Great Oak Farm. There’s four other vegetable producers who are member producers and grow vegetables for the boxes."

Plus, they’ve been able to pool resources to build the infrastructure necessary to store and deliver food across the region, which can be one of the biggest challenges for farmers working alone. River Road Farm Owner Todd Rothe said the cooperative CSA has allowed him to expand production.

"Incredibly so," he said. "We couldn’t have realized the growth that we have in the last six years without doing the CSA honestly and having the support of households — families — that buy our products directly from us and give us a really good price for it."

About 70 percent of the Bayfield Foods Cooperative's food goes out to people who have bought boxes ahead of time through the CSA. The remaining 30 percent is sold to stores and restaurants. Over the last five years, they’ve nearly tripled the amount of vegetable boxes sold directly to members from 60 boxes to 150 boxes. But Rothe and other farmers still rely on other incomes to make ends meet.

Someday, Rothe said he’d like to work solely on the farm.

"That’s the goal, but still in the process of growing my farm operation to get to that point," Rothe said. Sometimes it's hard for farms to make the math work, said Jason Fischbach, an agriculture agent with the University of Wisconsin-Extension. There aren't that many people in northern Wisconsin to support local growers, so farmers have to seek larger markets across the boarder in Duluth or Minneapolis. Farmers may also lack the scale to provide a consistent supply. Plus, local farms can’t produce food cheap enough, Fischbach said.

"They have to do a really good job of convincing the buyers that the higher prices is worth it, that they get better quality… A number of producers have gotten bigger to get their cost of production lower, and they’ve also been able to sell their product as a higher-quality, higher-value product," he said.

To help with financial obstacles on the consumer end, the Lake Superior CSA offers a payment plan to members, said the CSA's manager Stefanie Jaeger.

"Which in the past a lot of CSAs weren’t able to do," she said. "We’re trying to make it more affordable for people to purchase local and eat local." Even so, farmers are also challenged with meeting consumers’ desire for convenience as meal delivery services like Blue Apron have grown more popular, said Kietra Olson, foods specialist with the Wisconsin Department of Agriculture, Trade and Consumer Protection.

"I think the public sees it as sort of another Blue Apron, where they send you all of the ingredients you need and instructions on how to make something," Olson said "A lot of people who signed up for CSAs were expecting more flexibility. It’s difficult for the farmers on their end to manage."

Nationwide, CSAs made up 7 percent of direct-to-consumer food sales while online services followed closely behind at 6 percent in 2015, according to the USDA survey. Stores on the farm and farmers’ markets accounted for the majority of $3 billion in direct sales to consumers. Some Wisconsin CSAs have been experiencing challenges with attracting new members in recent years, Olson said.

"This was, I think, the first year that I heard a lot of CSAs weren’t able to max out their membership, which is new," she said. "Trying to work through that is going to be a little bit challenging for growers."

But she said the Bayfield Foods Cooperative seems to be on the edge of a trend.

"More people, I think, are working with neighbor farms to offer something that’s a little bit more flexible to the public," she said.

Great Oak Farm’s Duke said they’ve worked hard to listen to what people want. By working together, he said they’re able to spend less time worrying and more time in the field.

"That way we can do what we do best, which is grow food," he said.

Plus, the CSA is exploring ways to get more local food out there. The Bayfield Foods Cooperative recently received a state grant that will eventually allow it to ship local food or meal kits to customers in Minnesota and Wisconsin.