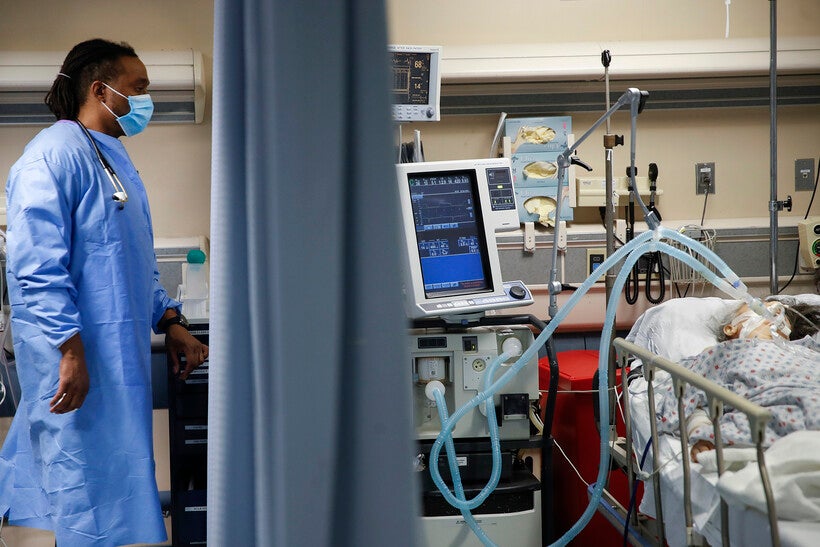 A nurse watches over a COVID-19 patient who is attached to a ventilator in the emergency room, Monday, April 20, 2020, at St. Joseph's Hospital in Yonkers, New York. John Minchillo/AP Photo

The number of people hospitalized with COVID-19 in Wisconsin has risen in August, and in some parts of the state they are the highest they have been since the pandemic began.

Experts say early-pandemic fears of overwhelmed and overrun hospitals are unlikely to be a reality in Wisconsin. But the increase in patients requiring hospitalization in recent weeks remains a worrying sign that Wisconsin is not yet winning its battle against the virus.

State data from the Department of Health Services and the Wisconsin Hospital Association show an average of 355 people per day were hospitalized with COVID-19 in August, including a peak of 414 patients on Aug. 10.

That’s a substantial increase from the state's low point in late June and early July, when the number of hospitalized patients was consistently fewer than 250. Wisconsin's hospital beds are now 79 percent full — with 2,437 beds free compared to a total capacity of 11,520 in the state. These data account for all hospital occupancies for any disease.

Hospital officials say they're comfortable that Wisconsin's health infrastructure can accommodate the needs of its patients. That's in part because of planning and medical learning that's happened in the first six months of the pandemic, and in part because public health measures such as the state's mask mandate and social distancing practices can serve to at least slow infection surges.

"It's worrisome that hospitalizations are going up, because hospitalizations are one of the best markers for the state of the pandemic in Wisconsin," said Dr. Mark Kaufman, the chief medical officer with the Wisconsin Hospital Association. "It is a lagging indicator ... but it does really tell you what’s going on."

What it shows, Kaufman said, is a trend of increasing hospitalizations that have followed several weeks behind the month of rising case numbers Wisconsin saw in July. Hospitalizations tend to occur about two weeks after the disease first appears in those whose severe infections don't improve at home or those with underlying health conditions that put them at special risk.

In much of the state, new COVID-19 infections in July were most common in people in their 20s. Younger people are less likely to require hospitalization, though health professionals stress that the disease still poses risks to young people, and we do not know what its long-term health effects may be.

But another risk is that younger people who became infected in July can, in turn, spread the disease to older people who are more at risk of serious short-term complications — their parents or grandparents, their older coworkers and friends. That appears to have been the case. Given several weeks to gestate, many of August's hospitalizations are the product of transmissions in July.

Kaufman said another factor is the virus's migration this summer into rural parts of the state that didn't have a lot of cases during the spring.

As the virus has spread to Wisconsin’s rural communities, some regions of the state are now recording their highest-ever COVID-19 hospitalization numbers. State data divide Wisconsin into seven regions. In the north central region, which includes much of the Northwoods, there were fewer than 10 hospitalized patients at any time as late as June 21. By Aug. 10, there were 31 patients hospitalized, and the average number in the past month is the highest the region has seen since the pandemic began.

Western Wisconsin in August has also seen its highest totals since the onset of the pandemic, with 16 hospitalizations on Aug. 20.

Alison Page, CEO of Western Wisconsin Health, said the hospital has beds for patients and the ability to transfer patients as needed to intensive care units in Minneapolis or Eau Claire, which continue to have the capacity to take them. Still, she sees concern in the rising number of hospitalizations, and the possibility that the start of the school year will lead to new outbreaks and subsequent isolation periods for children and their parents.

"The beds are one thing. The staff is another," Page said. "In a small place like ours, our greater concern is having staff available to take care of patients."

Other regions, including those with urban centers in southeast (Milwaukee), south central (Madison) and northeast (Green Bay) Wisconsin, have seen rising hospitalization numbers in August that have not yet matched the peaks those regions saw in April.

"We've learned to become more nimble in the last six months, out of necessity," Kaufman said.

At this point, though, advances in treatment and understanding of the disease mean it's unlikely that Wisconsin’s hospitals will run out of capacity. Kaufman said the state's focus should be on the public health measures that will reduce the spread of the disease — and the number of people hospitalized with it.

The number of hospitalized patients, he said, "depends on how good we are with regard to masks, physical distancing and personal hygiene. That's what we need to focus on. We need to have our eye on the data, but then we need to put all our energy into controlling what we can control."